It was a very calm morning in Halifax, an omen of another major snow storm on the way. Arriving in the dark, and sailing again in the late afternoon, the first time caller Brighton tied up at Cerescorp, Fairview Cove for THE Alliance EC5 / AL2 service.

It was flat calm in the Basin as Brighton had Fairvew Cove to itself.

Built in 2007 by Koyo Dockayrd, as APL London the ship was renamed Zim London in 2013 and Brighton in 2015, all the while owned by something called Lombard Corporate December 3, but beneficially by Zodiac Maritime of London. The 71,786 gt, 72,982 dwt ship has a reported capacity of 6350 TEU. It is also one of the rare ships to be seen flying the British flag.

Another arrival for bunkers put in mid-morning and went up to pier 9C where trucks were waiting. Rosy is a 12,776 gt, 20,610 dwt chemical tanker built in 2008 by Qingshan, Wuhan, China. Although the ship has never called here before, it was scheduled to arrive for bunkers January 4, 2015 but bypassed due to bad weather. This time it got in under the wire. The ship is bound from Gdynia, Poland for Montreal, and should be well fueled in case it gets delayed by ice en route. 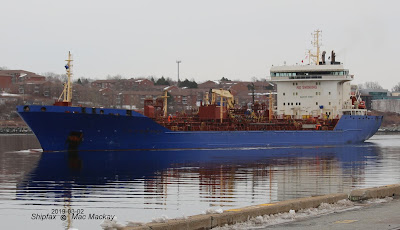 Rosy glides in toward pier 9C. A traces of the ship's name still shows on the bow, but most has been washed away.

The ship was built as HLL Caspian but was soon renamed  MCT Stockhorn, and carried that name until 2016.During that time it flew the Swiss flag and operated for Mega Chemicals Schiffahrt of Zurich. In 2016 the name was changed to SCT Stockhorn without apparent change of ownership. Between 2012 and 2105 the ship was made several transits of the St.Lawrence Seaway into the Great Lakes.
Rosy took its present name in 2017 when it was sold to Rosy Maritime Corp and came under the operation of Clearwater Ship Management BV. 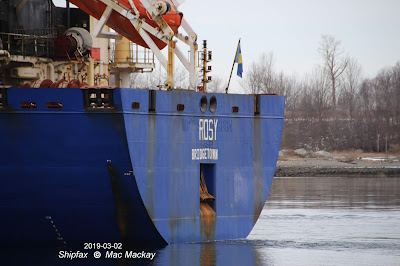 The hasty renaming took place in 2017, and included re-registering in Barbados, a fairly uncommon flag. Remarkably no ice appeared on the ship, so it must have made a southerly crossing of the Atlantic.

Autoport also had a ship in today after a few quiet days. Parana is a first time caller to Halifax, although its name and owner are familiar. Built in 2012 by Yangfan Group in China, the 47,053 gt, 12,868 dwt ship is small by current auto carrier standards, but still has a capacity of 5,000 CEU.

The tug Atlantic Larch takes up the bow position, still carrying some frozen spray after a recent up to Sheet Harbour. The aft tug, Atlantic Oak also has frozen spray on its fenders picked up working around the harbour.

The ship is owned by Parana GmbH + Co KG, and operated under the Laeisz Reederi banner. F. Laeisz, of the windjammer days, operated the "Flying P Line" of square riggers, all with names beginning with the letter P. In later years they specialized in reefers, along with other German owners.
Based in Rostock. the company now operates about 25 ships of all sorts, including bulkers, container ships, autocarriers, research vessels and gas tankers.