The Gibraltar flag Lomur sailing for the Icelandic shipping company Eimskip was in Halifax on February 2 for the first time, with heavy ice built up forward. As a small ship, with very little freeboard, this was not surprising in view of the winter conditions at the time and the vessel's route between Iceland, Argentia, NL, Halifax and Portland.
I posted the following photo of its arrival, see the entire post here: 2019/02/lomur-for-eimskip.html 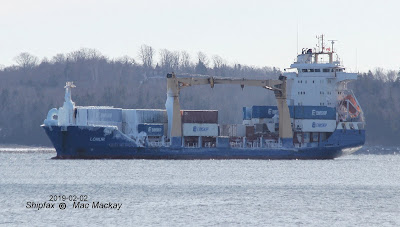 News has now reached me that the ship encountered more serious problems on March 11 while en route from Iceland in heavy weather. It sustained damage to 18 containers, including "deformations" and  there was damage to the ship itself including winches, deck machinery and deck fittings. Some repairs were apparently possible while the ship was underway, but one can only imagine the conditions.  There were no reports of containers lost overboard.

The ship arrived in Argentia March 14 and sailerd for Halifax today. It is due March 18. It is not clear how many of the damaged containers might have been discharged in Argentia or how much damage remains to be repaired. 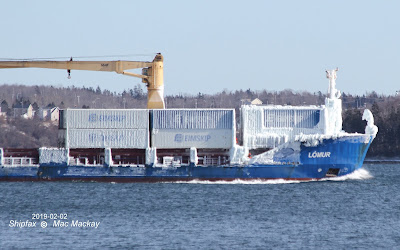 This post will be updated if more becomes known.

As I observed in the previous post, this is a very small ship for winter North Atlantic.