Jana Desgagnés arrived early this morning in Sydney harbour, docking at the government wharf, safely delivered by the tug Lois M. and assisted through the ice by the CCG. Potentially nasty situation averted. 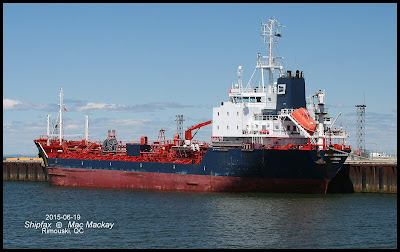 Jana Desgagnés docked in Rimouski, one of its regular ports of call.
Note the ice knife over the rudder.


After posting my last I recalled that Jana Desgagnés' sister ship Dara Desgagnés (ex Diamond Star) had a similar rudder problem in 2013, and arrived in Halifax for repairs.

I took some photos of the arrival from the Macdonald Bridge which showed the rudder jammed off centre.
See: http://shipfax.blogspot.com/2013/03/dara-desgagnes-limps-into-port.html

By coincidence perhaps, Dara Desgagnés is also arriving in Sydney this afternoon. The third sister Esta Desgagnés (ex Emerald Star, ex Emsstern) is trying its luck with the St.Lawrence Seaway, which is open for another season despite lingering ice. So far Esta has made it up to the US locks, and is likely to spend the night just below the Eisenhower Lock. CCGS Martha L. Black is breaking out the Thousands Islands area.

Other ships are bogged down, particularly at the east end of Lake Erie where ice has piled up similar to the situation in the Gulf, thanks to persiting west winds. Two CCG icebreakers, Pierre Radisson and Griffon, are beating their way through rafted ice to make a channel for Welland Canal traffic.