People have if  I have a permit from the Port of Halifax to take pictures of ships?

The answer to the question is a definite no. I have certainly been quizzed by Port security people on several occasions as to what I am doing, since I am clearly on Port Property. However I do not intrude on secure areas which are usually marked with signs.  When I explain I am taking a picture of a ship that seems to be a satisfactory - as long as I am not a "professional photographer".

I have to add that the security people are unfailingly polite, even when they have to explain to me where the magic (and sometimes invisible to me) security line is located. Now I know. Aside from some grammatical errors, the signs are clear. 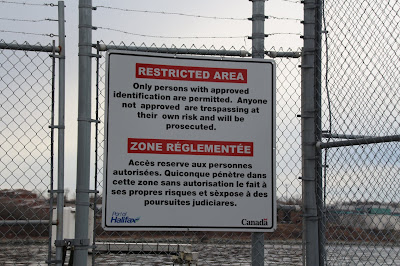 I am also told they do not like people taking photos of the secure areas. Why this should be must remain a bit of a mystery - not that I would want to take pictures of chain link fences with signs on them. However you will frequently see my photos are framed by fence posts and sometimes by the edges of chain link fencing. 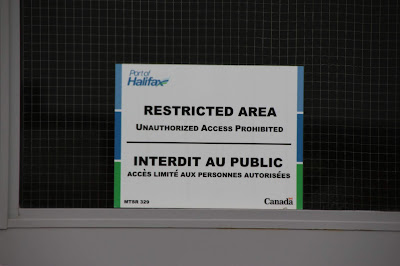 My defense - if I have any at all - is that unless the area is posted as secure, I can be there. This may be a weak argument since I am technically not on so-called "public" property.  I have found however that public property is inevitably owned by someone, and public really only means access is not restricted. I am therefore careful not to stray onto restricted places, even though my camera lens may project into it from time to time. 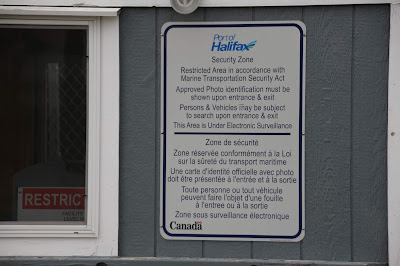 For the record, I have been taking photos of ships from Port property since 1966. When the Port had its own police force, I was well known to them and considered harmless. Since that force (the National Harbours Board Police) was disbanded, I have never rarely had occasion to speak with the Halifax police who took over, however their presence is minimal. 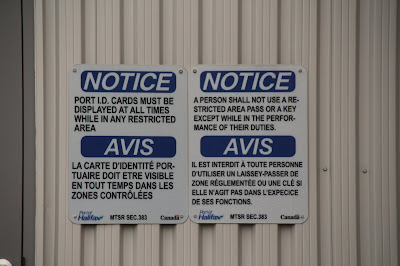 After 9/11 Port security ramped up and almost all working areas of the port were fenced and gated. The Port has security guards under contract from a local agency and monitors the areas with a plethora of cameras. 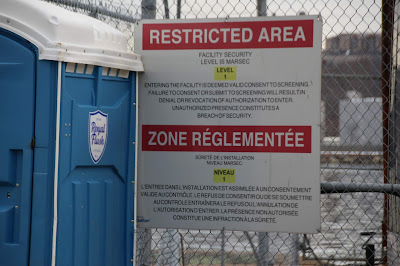 The reason I am posting this at all is to advise others not to wander about too freely in the port and pay attention to the signs.

The reference to MARSEC 1 comes from definitions in the ISPS Code and Canada's Marine Transportation Security  Regulations. MARSEC 1 is the base level of security requirements and may go up to MARSEC 2 or MARSEC 3 based on identifiable threats. All ships and port facilities normally operate on MARSEC level 1.