Ferry woes continue in Quebec, and the Société des Traversiers du Québec (STQ) is scrambling once again to keep some sort of service operating on the lower St.Lawrence.

It all started, as reported here in December when F.-A.-Gauthier had to be removed from service for repairs. The sophisticated LNG powered ship has had continual teething problems since it was delivered by Fincantieri in Italy in 2015.  The most recent crisis resulted in the ship being sidelined December 16 due to "technical issues" involving its propulsion system. It was sent to drydock in Lévis in mid-January, for investigation, with no estimated timetable for repairs, much less return to service. 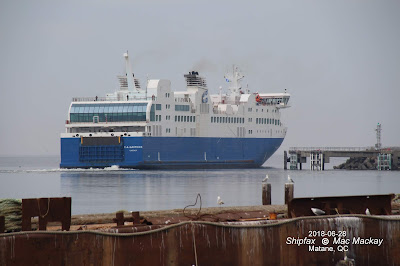 The ship provides the only year round service between the north and south shores of the St.Lawrence below Quebec City. Linking Matane with Baie-Comeau and Godbout on the north side, it forms a vital link in transportation of people and goods. Without it, a  lengthy road trip is required via Quebec City in winter. Even in summer the three seasonal ferry services farther upstream are limited by the  number of trucks they can carry (if any) .

For a time STQ was able to charter the C.T.M.A. Vacancier - the only similar ship available - from the Magdalen Island service, but it had to be returned to its owners by the end of January. They then secured its fleet mate, C.T.M.A. Voyageur for a time. Meanwhile STQ had been obliged to provide air service for passengers.

In a panic move, STQ purchased the ferry Apollo, sight unseen, from the Woodward Group. Built in 1970 it was just about to be retired from the St.Barbe - Blanc Sablon route on the Strait of Belle Isle. The new ferry Qajak Wwas rushed into service there to accommodate the Apollo's transfer to Matane in early February.

On February 25 Apollo made a hard landing in Baie-Comeau and damaged its bow visor. Repairs to the visor and incidental damage caused by those repairs took until March 7.
Then on March 16 the ship made another hard landing, this time stern BOW FIRST in Matane. Damage to the stern gate VISOR AND HULL resulted in STQ retiring the ship for good. The air shuttle for passengers was resumed and another arrangement was made with CTMA for use of C.T.M.A. Voyageur for two round trips, three days a week starting March 21.
Apollo had been in service for less than twenty days in total, and had cost $2.1 mn to purchase. But the cost of modifications and repairs has now added up to $3.5 mn. An expensive taxi.

STQ has already inspected a replacement ferry that they hope to have in service for the summer vacation season, since the earliest estimate for F.-A.-Gauthier's return is now late August. The ship is a sister to Woodwards Qajak W. Currently carrying the name Saarema it is in Cuxhaven and may be in Quebec by late April. No in-service date has been confirmed yet.

Meanwhile CTMA got some good news. In yesterday's Federal budget a promise was made to replace  Madeleine. That ship, which operates between Souris, PE and Grindstone (Cap-aux-Meules) in the Magdalen Islands, was in the news recently when Souris was so plugged with ice that the ship could not reach its dock. Instead it had to use North Sydney as its "mainland" port, again resulting in very long drives for customers, including trucks. Most of those are from Quebec, so the added five hours was a major inconvenience. It has been able to access Souris again this week.


Madeleine, built in 1981 by Verolme Cork Dockyard Ltd, was acquired in 1997 after Irish Sea service as Leinster, Isle of Inishmore and Isle of Inishturk.
The ship arrived in Halifax June 14, 1997 still with its last Irish name and sailed a week later after Canadian compliance work was completed at Halifax Shipyard. Its new name was not displayed nor was it repainted. All that work took place after it had arrived in the Magdalen Islands. 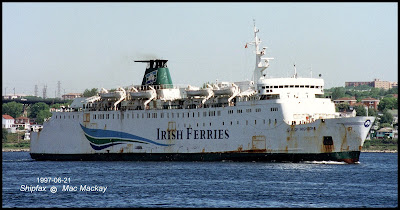 An Irish ferry in Halifax - a little off course?

Aside from plating over some side ports, the ship is little changed although it has received several  several paint schemes since. 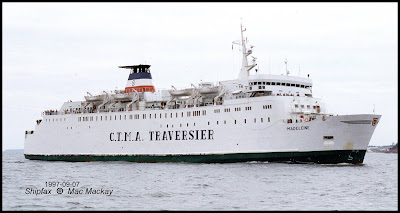 This first paint scheme has since been superseded.

Madeleine is owned by the Federal Minister of Transport, and was registered in Ottawa, June 20, 1997 and only managed by CTMA. That is why its replacement was announced by the Minister of Finance.

CTMA's other two ferries, mentioned above, are owned by CTMA directly. There is still no news on C.T.M.A Vacancier's replacement. That potential vessel was announced by the last Quebec provincial government, but cancelled by the present one.