When the Eimskip ship Lomur arrived this morning, I could not see any particular sign that the ship had encountered heavy weather nor had damage to containers. However that observation was made in very dim light and from a distance. [see previous post]

Today's scheduled stop (westbound) was to be a brief one, but when its departure was advanced from 10:30 to 12:00 and then it did not sail for more than an hour, it was apparent that there was more work involved than planned. 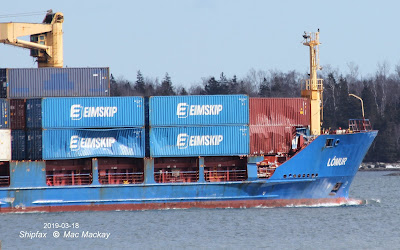 Damaged containers in the first three bays are more than evident even from a distance. Damage to the ship is harder to detect. The railing around the bow davit and the access ladder to the forward crane are certainly mangled. This could have been done by seas smashing down on the ship, or by loose or wayward containers.

As it pulled clear of Halterm there certainly was evidence of the "deformation" of containers mentioned in the casualty report.  Since the ship is westbound from Iceland to Halifax and on to Portland, I presume those damaged boxes will be dealt with in Portland. The Halifax stop normally involves unloading a few Eimskip containers, and perhaps picking up some empties. 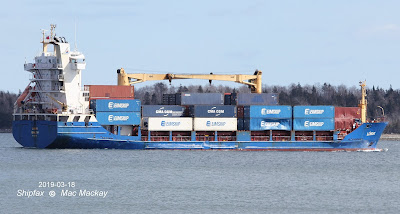 There did not seem to be any damage to containers aft of midships, but because some of those are CMA CGM, I expect there were loaded here today.

Eimskip also operates a dedicated shuttle service from Halifax to and from New England for CMA CGM, so those boxes would have been loaded in Halifax. Export boxes from Halifax for Iceland would normally be picked up on the eastbound leg.