As a follow up to the March 1 post that noted the arrival of Federal Yamaska I am posting this account , which I had been holding for a while:

One of the success stories in Canadian Shipping is Fednav Ltd (Federal Commerce and Navigation). Founded in the late 1940s using surplus war-built ships, it has grown into one of the largest users of the St.Lawrence Seaway by tonnage and number of ships. Any trip along the St.Lawrence and Seaway is bound to include several sightings of these distinctively red painted ships.

Federal Mosel was built in 2017 by New Times Shipbuilding Co in Jingjiang, China. A bulk carrier of 22,947 grt, 36,583 dwt it is equipped with four 36 tonne cranes. It is seen here at Sorel with cargo from Klaipeda.

Fednav's current fleet consists of about 80 ships, with about 47 of Seawaymax (Laker) size.
Known as progressive operators, the company is always renewing its fleet with five new ships joining the fleet this year, two of which are Laker size. 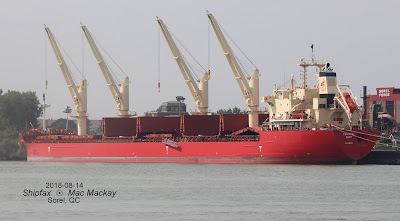 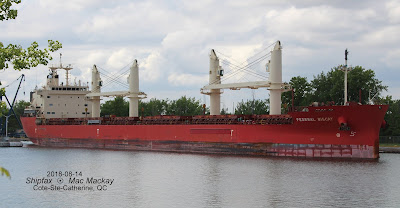 Federal Biscay clearing the Cote-Ste-Catherine Lock downbound for Ravenna, Italy, is a 20,789 grt, 34,564 dwt bulker with four 35 tonne cranes. The ship has hull strakes installed to assist in locking through the Seaway using suction devices rather than mooring wires. 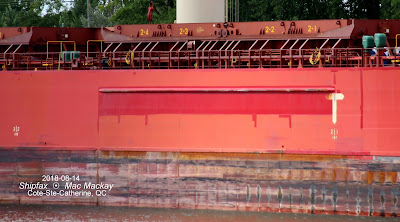 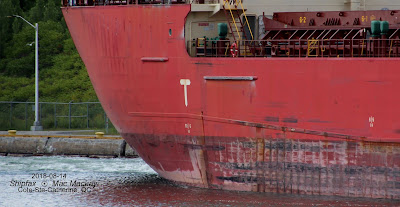 Since the majority of their trade is international, the company has only two ships flying the Canadian flag. It was announced earlier this year (see a previous post) that Arctic will be replaced. The company has developed expertise in ice navigation, and its ships are active in the Canadian arctic.