In a communiqué yesterday the Halifax Port Authority  announced that work is progressing on the Pier C extension at the Southend Container Terminal operated by Halterm. 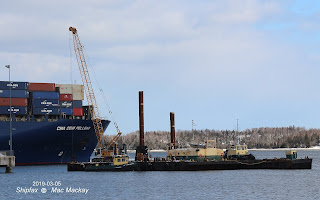 Dredging has passed the 50% mark, and this is about right by my calculations. The dredging was to take about 14 weeks and we are now in week 8.  McNally Construction's dipper dredge Derrick No.4 has been working steadily removing loose material from the bottom. The tugs Mister Joe and J.F.Whalen  using two scows, S.11 and S.12 transport the spoil to a basin at Fairview Cove where it has been re-deposited. 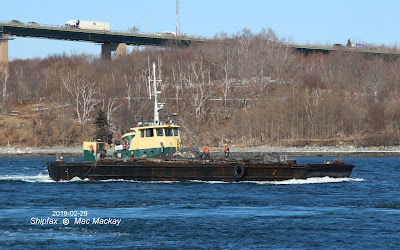 Mister Joe with an empty scow making the long haul back to Pier C.
The dredge plant is based at Pier 9 and works Monday to Friday off the south end of Pier 42. The plant is returned to Pier 9 for the weekend where its re-fueled and necessary maintenance takes place. 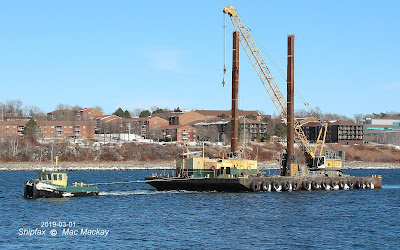 The J.F.Whalen hauls the Derrick No.4 back to Pier 9 last Friday.

HPA also announced that caisson construction will be starting soon using pier 9C in the Richmond Terminals. This is the same location where all other recent caisson work has been done. McNally Construction has built caissons for Halifax Shipyard Pier 6, Fairview Cove container terminal and HMC Dockyard Jetty NK in the past few years, using a semi-submersible barge. The caissons are built of concrete using slip-forming and once completed they are floated off the barge. Compressed air provides buoyancy, and when the units are towed to location they are sunk in position by releasing the air.

The current schedule has the placement of the caissons this summer with infilling over the next winter. As usual with caissons, they are allowed to settle for several months before the cope walls and topping are completed, and that work will begin in the spring of 2020.

There were two noticeable absences from HPA's press release. The first was that the word "temporary" did not appear anywhere in the text. The Pier C southward extension was up until now always referred to as temporary. Perhaps they are considering more options for Phase 2. Certainly they are opening more avenues for public consultation.

The second is the absence of the well used walkway along the extension. I was personally assured that there would be a walkway, however it does not appear in the latest drawings. The only walkway shown is the existing breakwater walkway, which has been closed for the duration of construction. It ends abruptly at the new extension, with some form of blockade. Probably a combination of chain link and barbed wire fencing - hardly an appealing option.

When Pier 42 was extended the last time the same thing happened. The old walkway was unceremoniously severed at the breakwater. After public pressure a narrow walkway was added to that extension, cantilevered out over the water. While better than nothing it was stingy by comparison to its predecessor which had a gathering area at the end allowing for good viewing both of Halterm activity and also of ships arriving and leaving the harbour. It also made a satisfactory destination for those who made the walk.

Although poorly maintained with only two park benches and no means of refuse disposal, the entire breakwater and walkway remained popular and even in the worst weather it was well used. Some walkers carried a garbage bag with them to pick up debris on their walk, but it was a thankless and never ending task.

The Port is missing a big opportunity for public engagement by deleting the walkway from the new extension. Interpretative panels erected by Halterm at the entrance to the breakwater are informative, but they are a very small gesture when a larger one is called for. This is a chance for the Port to interact with the public - both residents and visitors - and to highlight its importance of the Port to the economy. Particularly where so much of the working port has now been cut off from view by walls of containers and security fencing, the Port needs to find ways to interact with the public.

Here's a bit of an  album of the evolution of the end of pier: 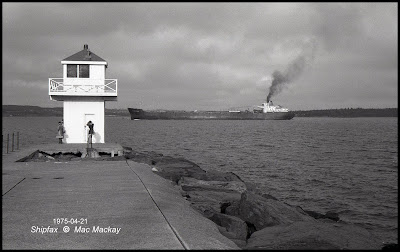 When Halterm was built in the late 1960s and early 1970s, the old Seaward Command breakwater, complete with miniature lighthouse, extended beyond the pier face. Public access was unlimited and despite being an unmaintained and even dangerous location at times, it was a popular look-off.
In this 1975 photo the bulk carrier Ontario Power was inbound to load at National Gypsum. 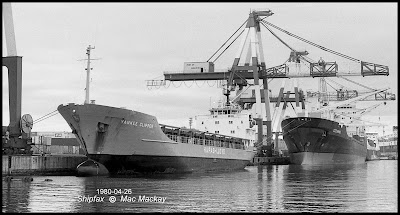 From the lighthouse it was possible to look back along the pier face. Note that there were three ships tied up at the same time with some room left over. Ships have grown. The feeder ship Yankee Clipper ran to the US weekly, Cézanne was a cargo/container ship for the French line CGM and Atlantic Prosper was on ACL's B service. 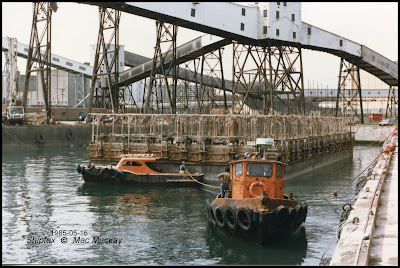 Beaver Marine, the predecessor company to McNally, built caissons at pier 25 for the first Halterm extension in 1985. Delivering concrete round the clock resulted in a lot of truck activity in the area. Extending the pier meant that the breakwater was cut back and the lighthouse - sadly- disappeared. 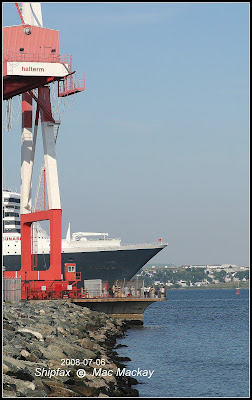 The short extension that cut off the breakwater had a gathering area at the end providing an excellent viewing platform for passing ships such as Queen Mary 2. The platform's curved underside deflected waves. The Ives Knoll buoy was still visible from the land side of the breakwater. 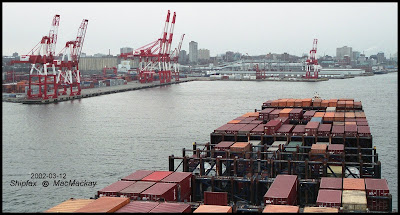 A pilots eye view (from Atlantic Conveyor (ii)) showed that the first extension was quite short. 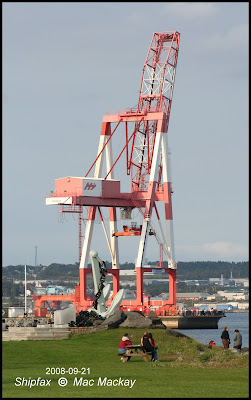 Large crowds were known to congregate on the look-off, particularly during cruise ship season. 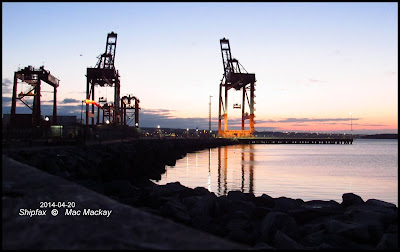 When Halterm was extended the last time a walkway was added to the deck, but it only returned part way across the end of the pier and was very narrow - barely five feet, and had no gathering space at the end. 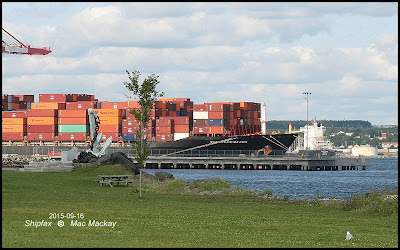 The extension was built on piles, minimizing the amount of fill needed. 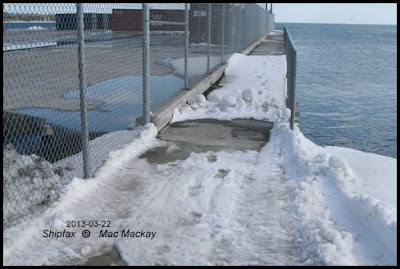 The walkway - now gone - had many drawbacks, not least of which was that a portion of the pier deck drained across it, creating a wet or icy surface. It was also too narrow for a skid-steer plow. As a result it was not maintained in winter, and snow collected and drifted across it. Intrepid ship watchers broke trail for subsequent visitors. 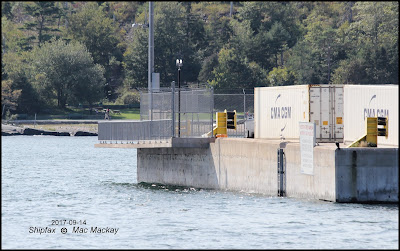 The cantilevered end platform - obviously an afterthought, and less generous than the previous one - was still an excellent vantage point. A good many Shipfax photos were taken from this spot.
It stopped just short of a large bollard (orange object next to the yellow crane bumper) for safety reasons in case a line parted. I have only seen the bollard used once. 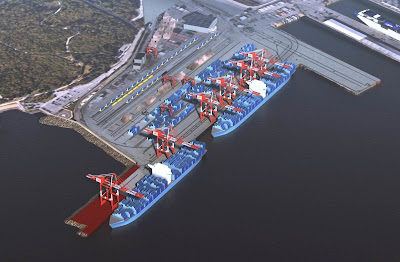 This impression from the Port's publicity shows the new extension to be more than twice as long as the previous one, with armour stone dumped around the shore side and no walkway past the old breakwater sidewalk. Certainly an unfriendly aspect.
It also shows two new cranes (one has been ordered and there is an option for a second) and no crane at pier 36. Discussion about changes within Halterm will have to wait for another post.
(P.S. Why are all the containers blue?)

Here is the text of the Press Release I received:

March 5, 2019, Halifax, Nova Scotia – The first phase of work on the South End Container Terminal extension at the Port of Halifax is well underway. This involves dredging of soft material that has accumulated over time. The first phase of the project is over 50% complete. The next phase, construction of concrete caissons, will begin in the coming weeks. Construction will take place at Richmond Terminals and completed caissons will be barged for placement. An updated project timeline can be found at www.portcityhfx.ca.

As the South End Container Terminal extension moves forward, the Halifax Authority continues to seek a solution that will reduce port-related traffic in downtown Halifax. Discussions are underway with HPA tenants and CN Rail on how to better use existing assets and infrastructure. With partners, the Halifax Port Authority has submitted an application for funding through the National Trade Corridors Fund in the most recent round. We are preparing for additional community consultation as well.

The purpose of the extension is to ensure the Port of Halifax can berth and service two of the Ultra-Class vessels (over 350 metres length overall) now serving trade routes along the East Coast of North America. Future cargo growth through the Port of Halifax will be rail-based, connecting inland markets to Europe and Southeast Asia through our international Ultra-Class vessel gateway.


For more information on the Port's plans go to the embeeded link above or:
https://portcityhfx.ca/en/