In a press release Hapag-Lloyd  is reporting that it will take another five weeks to unload the remaining damaged containers from the Yantian Express. The ship is berthed at the container terminal in Freeport, Bahamas where a special area has been set aside for "distressed cargo."

However there is no word yet on when the remaining undamaged containers can be unloaded. The container terminal has no room for all those boxes, and so it is likely the ship will have to move to the mainland- somewhere. Those undamaged boxes are reported to be dry and in sound condition.

The ship was en route to Halifax January 4 when fire broke out on deck. After extinguishing the fire, salvors escorted the ship to Freeport, arriving February 4. It was reported then that 198 containers were a total loss and another 460 might be damaged. Power had been cut to all reefer containers earlier, and it is not clear whether these are included in the  numbers of damaged boxes. 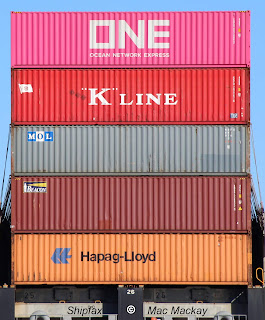 Yantian Express is a Hapag-Lloyd ship, but it was operating on the EC5 service of THE Alliance, which consists of  Hapag-Loyd, Yang Ming and ONE. The latter, Ocean Network Express is the merged Japanese container lines K-Line, NYK Line and MOL.

The ship has a capacity of 7506 TEUs, and although not fully loaded, it would have containers from all the component lines, other lines and many independents.