The search for oil in Alberta finally paid off for Imperial Oil on January 13, 1947 when a well 15 miles west of the village of Leduc and 30 miles out of Edmonton, delivered the first commercial quantities of crude. Many wells followed and the boom was on. The issue then, as now, was how to deliver that oil to users in other parts of the country, and the world.

In remarkably quick time a pipeline was run from Edmonton to Regina and to Superior, WI. Built in 150 days in 1950, it was then extended to Sarnia in 1953, Toronto in 1957 and eventually to Montreal and Chicago.  Before the line reached Sarnia however, there was a need for tankers to transport the oil from Superior.

This was nine years before the opening of the St.Lawrence Seaway, so no large ships could reach the Great Lakes from salt water. However Great Lakes shipbuilders were experienced in building large ships, and had no hesitation in constructing a quartet of large tankers solely for the Superior to Sarnia and Toronto run. Imperial Oil, ordered three ships, knowing full well that they would have only a limited life span. In fact they set up a new company called Pipeline Tankers Ltd to own and operate the ships. Once the pipeline was extended to Sarnia the ships were converted (somewhat awkwardly) to bulk  carriers and lived out their lives hauling grain and ore.

The British American Oil Co Ltd, known by its initials as B-A, had a slightly better idea. They also foresaw a limited lifespan for the Superior shuttle, and so ordered a ship that could go to sea once the Seaway opened. They engaged Collingwood Shipyard to build B.A.Peerless. A 620 foot long x 68 foot wide ship of 12,638 gt, 18,360 dwt. It was steam turbine propelled  and used Vortometric smokeless boilers. At the time it was the largest Canadian tanker in the domestic trade, despite being confined to the Great Lakes. The ship was delivered in October 1952, and carried crude from Superior to the B-A refinery in Toronto (Clarkson) for a few years. Once the pipeline was extended however, it shifted to carrying clean products.

B-A was already a major tanker operator on the Lakes using canal sized vessels. It was also the proponent behind the Portland, ME / Montreal pipeline during World War II that imported Venezuelan oil for its Montreal refinery. It already had refineries in Alberta and Port Moody, BC and served east coast Canada and Newfoundland. Gulf Oil Corporation of the United States acquired 20% of B-A from the late 1940s and by 1956 had a 64.8% stake and controlling interest.

In 1958 while other shipowners were enlarging their ships or building bigger ones for the St.Lawrence Seaway, the B.A.Peerless was sent to the Port Arthur Shipbuilding Company where it was shortened from 620 ft to 520 ft. This seemingly odd reconstruction that reduced the ship's tonnages to 10,900 gt, 15,425 dwt, also made it possible to go to sea without substantial rebuilding. 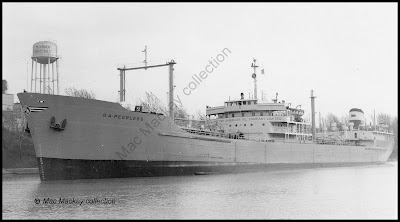 Normally a black and white photo would not do a ship complete justice, but as B.A.Peerless the ship's hull was gray and not far off the colour in this photo.


After that the ship was seen frequently on the east coast and often wintered over in Halifax. However it continued working on the Great Lakes and St.Lawrence Seaway too, often running between Clarkson and Montreal.

In 1969 Gulf Canada exercised its control of B-A and renamed the company Gulf Oil Canada Ltd and the ship was renamed Gulf Canada while drydocked in Halifax in March.

In 1984 Chevron Corp bought Gulf Oil Canada, but then through a complicated series of transactions sold the company to Olympia and York Developments which in turn sold its eastern downstream interests to Ultramar and closed the Montreal East refinery. Gulf sold Gulf Canada to the Greater Sarnia Investment Corporation, a Sandrin company, which formed Coastal Canada Marine Inc, a one ship company. They operated the ship as a  "common carrier", in other words not dedicated to any one company. After sustaining bow damage in the fall of 1988 it was repaired in Sarnia but sent to Halifax and laid up for the winter. It did return to service in the summer of 1989.

On January 2, 1989 the ship arrived in Halifax and was laid up for a final time and at some point during the year it was sold for scrap to India. On October 27, 1989 its Canadian register was closed and it was renamed Coastal I under the St.Vincent and Grenadines flag. In December 1989 the USSR tug Gigant arrived and sailed December 19 with the ship in tow. On arrival in Alang March 22, 1990, the ship was broken up. 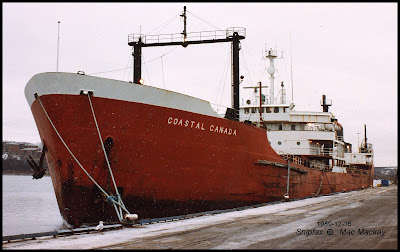 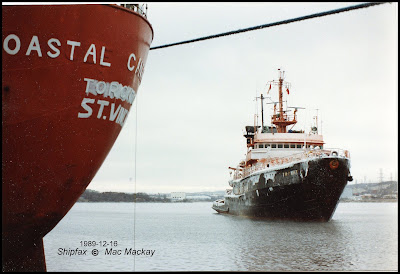 The tug Gigant fared somewhat better as it was later converted to a luxury expedition yacht and is still sailing.