Friday can be a busy day in the port as ships try to get in an out before the weekend. Today was not exactly bustling, but among the arrivals were two ships of interest.

CLI Pride is back again. This is its third transatlantic trip in three months. January 7, February 6 and March 8 is an enviable record, particularly in the dead of winter. While I have not yet been able to determine what cargo the ship is carrying, it has been tying up at Fairview Cove, and sailing in a matter of hours.
On its first trip it arrived from Rotterdam, but on the second and third it arrived from Liverpool. 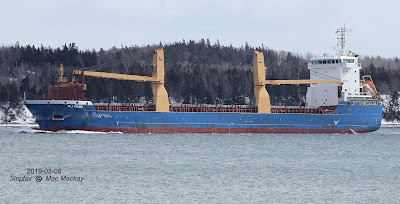 A small ship of 7138 grt, and lightly loaded, it must be a gruelling experience for its crew. After a few calm hours in port, it is back off to sea again.

Following closely behind was the tanker SCF Angara, It arrived from Baton Rouge, LA for Imperial Oil. 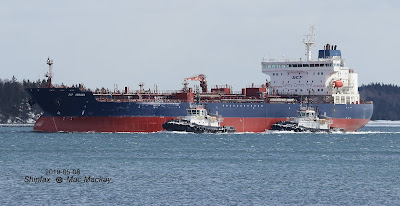 A 29,967 grt, 50,956 dwt ice class product tanker, it was built in 2008 by STX Shipbuilding Co in Jinhae, South Korea. Originally Prisco Ekaterina it was acquired by current owners SCF and renamed in 2016. SCF is Sovcomflot, the big Russian shipping company, primarily tanker owners. Their current fleet consists of 123 tankers (product, shuttle and crude) and 16 gas carriers (both LNG and LPG). Of these, 8 are under construction. The company also operates 42 offshore vessels (supply and seismic) and two bulk  carriers.
SCF are proponents of gas fueled ships and are in the forefront of developing this as a means of compliance with more stringent emission regulations. 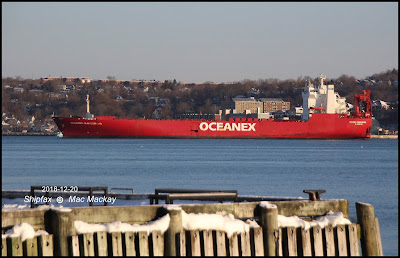 Among the regular Friday callers is Oceanex Sanderling. Owners Oceanex are reporting a significant drop in traffic, reflecting a shrinking economy. A 15% drop in automobile shipments (largely new cars) and a 10% drop in regular freight after two years of stable volumes. Oceanex is not alone in this trend. Its main competitor, the subsidized Marine Atlantic reports 4.2% less passenger and commercial traffic.