Is it weather or is it climate

Following another day of intermittent withdrawal of pilotage services in and out of Halifax, and challenging ice conditions in the Gulf of St.Lawrence and Cabot Strait, it is fair to ask the question. Is it just that this is a bad year for weather related events or is it a new condition brought about by change in the climate? 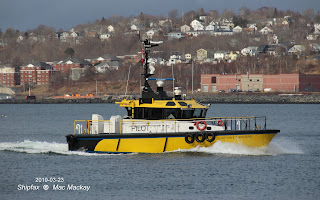 Substitute pilot boat Captain E.T. Rogers dips it nose in a swell within the harbour, on its way outbound this afternoon.


Conventional wisdom now is that there is climate change, and one of the signs of it is more extremes in weather. Whether this will become the norm, and what can be done about it is an important issue. Certainly as a port, Halifax cannot become known as a place where you can expect delays because it is too rough for pilots. Schedule is important in container shipping, and other port users, so a solution needs to be found.

As for ice in the St.Lawrence there are several issues there as well, including the Canadian Coast Guard's ability to keep ships moving, and the adequacy of the ships themselves.

Periods of high winds and rough seas made it unsafe to embark and disembark pilots Friday and into this morning with several ships delayed or postponed.

The autocarrier Goodwood arrived early Friday morning but kept the tug Atlantic Willow alongside for the better part of the day. Whether this was due to high winds or some other issue with the ship, I have not heard. The next ship for Autoport, Boheme was due to arrive early this morning but it was put off  until noon time. Goodwood got away from the dock but went to anchorage number one, with two anchors down, where it remained until late this afternoon with a tug alongside for a time. (This suggests an engine problem.)

Goodwood weighs anchor after spending the afternoon in number one anchorage.
Boheme is tied up at Autoport in the background.


The gypsum carrier CSL Tacoma was due yesterday evening but has held off and for a time was scheduled for today, but is now due to enter tomorrow morning. It is outside the harbour drifting because the outer anchorages are not reliable in these conditions.

Without harping on this anymore, is it possible that the port's pilot boarding arrangements make it too hazardous under certain circumstances, and if so, are there other arrangements that can be made?

Observers agree that this has been a year of very heavy ice in the Gulf of St.Lawrence. With ferry service disrupted the Canadian Coast Guard ended up delivering food stuffs by icebreaker to Strait of Belle Isle communities where many store shelves were almost empty of perishables. Milk was to be delivered by airplane. Even icebreakers could not keep the St.Barbe / Blanc Sablon ferry running.

Ice-related casualties have been rare however, there is one in the news now, The Quebec based tanker Jana Desgagnés  suffered steering failure Thursday March 21 in very heavy ice about 16 nautical wiles SW of Port aux Basques. As a result the ship was going to go where the ice took it and there were concerns since the tanker was fully laden with cargo loaded at Come by Chance and bound for Quebec. 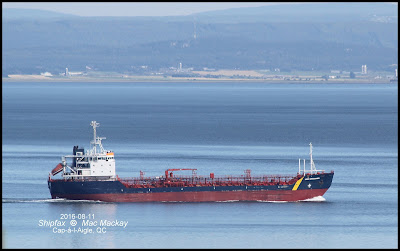 Jana Desgagnés has an icebreaking bow and large ice knife at the stern to protect the rudder, but that was not enough in the difficult condition this winter.


The tanker, a veteran of many years of winter ice navigation on the St.Lawrence and arctic supply work, is certainly equipped for these kinds of conditions, but rudders are the most susceptible to being jammed by ice, and that it likely what happened in this case.

The ship was built in 1993 by MTW Schiffswerft, Wismar as Jadestern for Rigel Shipping. It arrived in Halifax March 5, 1994 under that name and was renamed Jade Star while docked at Ultramar, Eastern Passage. It worked for Rigel's Canadian subsidiary and on charter to Pétro-Nav, Desgagnés' tanker company for Ultramar until 2010 when it was acquired by Transport Desgagnés Inc and renamed Jana Desgagnés. A small ship of 6262 gt, 10,550 dwt, it distributes fuel for Valero's (formerly Ultramar) refinery in Lévis, QC.

The Coast Guard response, while timely and useful, does bring to mind a number of issues. First Canada's "newest" icebreaker CCGS Captain Molly Kool the former Swedish offshore supplier Vidar Viking, in its first season of work, was on scene quickly and stopped the ship's drift.  Captain Molly Kool is still apparently fully equipped for towing, and using tow wires nestled the tanker's bow into a notch in its stern and made fast.

Sometimes referred to as a Baltic stern notch, this form of close-in towing, is rarely used in Canada for several reasons. First it is contrary to CCG policy except in direst emergency, to actually tow a ship. And secondly because no Canadian icebreakers are fitted with a Baltic stern notch. 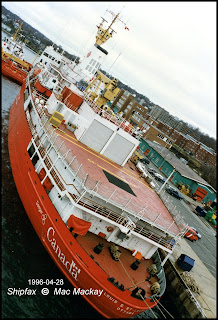 The last CCG icebreaker to be so equipped was CCGS Labrador (which was built to the USCG Wind class design, and originally sailed for the RCN)  which was scrapped in 1989. 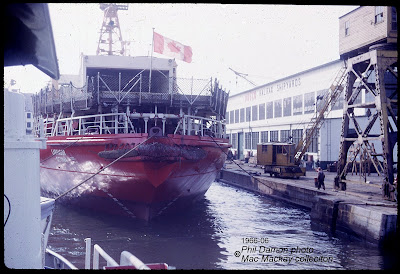 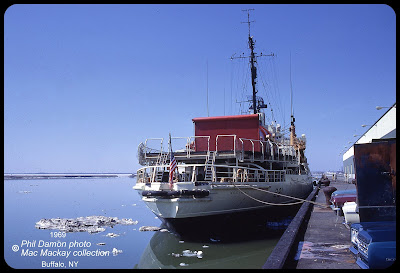 USCG Westwind, was similarly fitted. Apparently the USCG had no strictures against towing,

It is interesting that Captain Molly Kool retained this feature, because it was exactly what was needed in this case.

Had the Captain Molly Kool been an emergency towing vessel (ETV) which it could have been, it then would have towed the Jana Desgagnés to a safe port and sent the owners a bill for services or lodged a salvage claim.
However as a Coast Guard vessel it is obliged to stand by the tanker until a civilian tug arrives. The nearest available ice class tug is apparently Océan Arctique out of Sept-Iles. It was dispatched to the scene, and CCGS Louis St-Laurent was sent off to escort it to the scene. [See Updatre - March 25]

This seems a huge waste of resources where two CCG ships are tied up for days, when one ship (either CCG or a privately operated ETV) could have dealt with the matter in a day.

My previous cries for ETVs on this coast, that apparently fell on deaf ears, are hereby renewed.

In other CCG news Pierre Radisson has been assigned to spring break out on the Great Lakes and was the first ship up through the St.Lawrence Seaway on Thursday several days before the waterway re-opens for commercial traffic. The 'breaker is bound for Lake Superior (eventually) but has stopped off in Toronto, I hear because of engine problems.