= Past, Present and Future

When Shipfax began as a newsletter in 1986, it was typed (yes using a typewriter - albeit electric) photocopied and (snail) mailed or faxed (a now largely forgotten way of communicating) to a small group of interested parties. It was limited to four double sided pages so that it could be mailed at letter rate. It later evolved to using a word processor, permiting type variation including cyrillic characters for Russian ship names, but for a time was printed on a dot matrix printer. The print version evolved eventually to digitally embedded colour photos and colour copies. 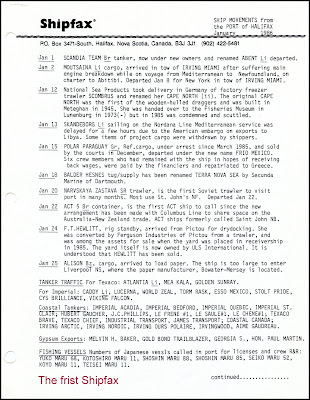 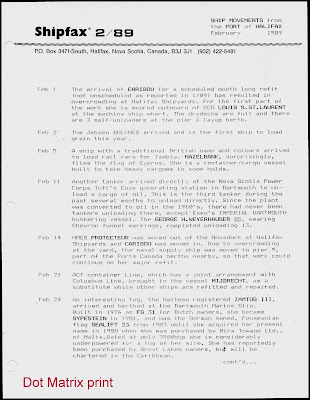 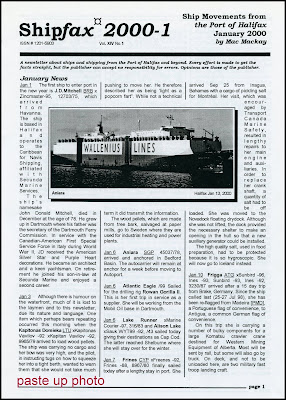 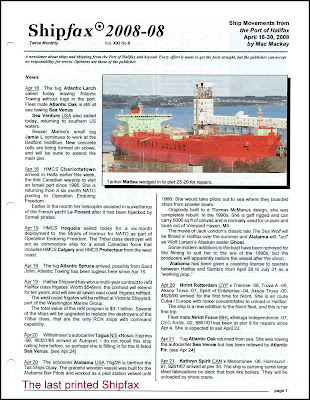 After going bi-monthly, then after a hiatus of a few months, on March 11, 2009, Shipfax was unleashed on the world as a blog. Since then there have been more than 2,687 posts, reaching numbers of people beyond comprehension in 1986. And with digital photography and scanning, it has been possible to illustrate most posts with images either current or archival. The first Shipfax newsletter that contained a photo resulted from pasting a photocopy of a print on the typewritten page before it was photocopied. The result was predictably awful.

But it is not just the method of publishing Shipfax that has changed. So has shipping and so has Halifax.  In the next few posts I will be looking back at some of the changes and developments over that time span, while still looking at current activities. I will also take the liberty of speculating on how I see the future unfolding.

Footnote:
The name Shipfax owes its inspiration to the cable addresses used by shipping agents and companies in the age of telegraphy. Amalgams of words were popular to distinguish the companies, but also as an abbreviation to simplify the address.

"Ship" is obvious - the newsletter was about ships. When there became enough information to justify a newsletter on tugs, Tugfax came along, and it became another blog in its own right in December 30, 2009.

"fax" is a multi-valent pun, intending to convey both the intention of the newsletter to relay facts but also that it was from Halifax and that it would be sent by facsimile transmission (fax). It is still the intention to report facts from Halifax, but the facsimile machine has gone the way of the dodo and the typewriter, not to mention the telegraphic addresses that I emulated.