The bulker Ferbec arrived in Halifax March 13 to re-register in Canada on completion of a winter charter under the Barbados flag. 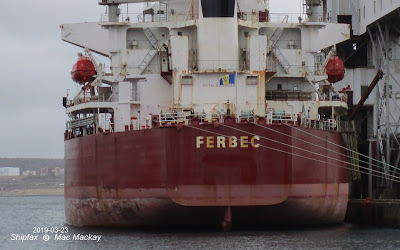 There have been some signs of life on the ship, but it apparently is not ready to go back to work yet. About mid-month the registry port of Bridgetown was painted over, and in the last day or two "Sorel" has reappeared on the stern. However as of this afternoon the ship was still flying the Barbados flag. 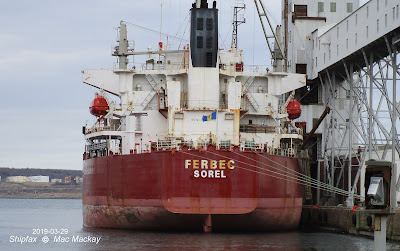 The delay may be due in part to ice conditions in the eastern Gulf where the ship will have to go to pick up cargo for its regular run. Havre St-Pierre was one of the areas hard hit by heavy ice, but now appears clear. However there is still quite bit of ice showing off Sept-Iles. The St.Lawrence River has a lot of broken and slush ice too depending on the area.

This particular ship is not the first  to use the delightful acronym "Fer" [iron] and "Bec" [Quebec]. The first Ferbec served CSL on the same Havre-St-Pierre / Sorel-Tracy run from 1977 to 2004 when it was retired and scrapped.

Ferbec number one, in the Narrows, lining up to enter the Novadock
While the colours in many of my older photos are "off" the slight pink tinge to the white bow paint is real. Despite constant hosing down, the iron ore dust clung to everything aboard the ship

A much bigger ship of 35,562 gt, 55,988 dwt, Ferbec (i) was a gearless bulker built by Ishikawajima Harijma [IHI] in Tokyo in 1966. It worked for NYK Line under the Japanese flag as Fugaku Maru. In 1977 Power Corporation of Canada Ltd, then parent company of CSL, acquired the ship and it took up the charter to QIT [Quebec Iron and Titanium]. From time to time the ship also carried iron ore from Port Cartier to Contrecouer.

Ferbec takes a break at its home port of Sorel.
In winter it was sometimes re-assigned, and I have record that it operated between Baltimore and Antwerp over the winter of 1979-1980. This may have been because of the Fednav position at CSL at the time.

As with the current Ferbec it was the largest ship in the CSL domestic fleet. In 1984 the ownership was vested in CSL Group Inc and in 1992 Canada Steamship Lines Inc, as the owners of CSL transitioned.

Ferbec did call in Halifax from time to time, usually for drydocking and layup. As an {old} Panamax ship, it fit neatly in the Novadock at Halifax Shipyard.


CSL raised the ire of Greenpeace in December 2004 when the Ferbec was reported sold for scrap to India. The ship was believed to contain hazardous substances, which would not be recycled properly in that country due to its lack of environmental standards and unsafe working conditions.

On January 3, 2005 the ship's Canadian registry was closed and the ship was soon renamed Michalakis by new owners Sea Maritime Corp. The ship was admitted to Mongolian registry in the "port" of Ulan Bator and on February 1, 2005 it sailed from its layup berth in Montreal. It arrived, under its own power, at Alang March 24, 2005 where it was soon broken up.