The survey vessel LeeWay Odyssey was at work in the lower harbour today, sporting its newly acquired grey hull paint. The ship was drydocked in Lunenburg over the winter where it was repainted from the red colour it inherited when the ship was acquired from the Coast Guard in 2015. The ship has been operating for the last week or two, mostly in Bedford Basin.

LeeWay Odyssey glides along the Dartmouth shore this afternoon. It appears to be deploying some sort of survey gear as it goes.

Now operated by LeeWay Marine and based at The Cove in Dartmouth, the ship is used for what is described as  data acquisition, which includes a wide variety of surveys and soundings. It is also available for other types of research and patrol work.

Breton Marine of Point Tupper, NS (now defunct) built the ship as Cape Harrison and its sister vessel Louisbourg in 1977. They were to be mid-shore fisheries patrol vessels  and were built of aluminum with high speed MTU engines to achieve 20 knots. In a now familiar story, the boats had "weatherability" issues - in other words they could not operate in some conditions and were therefore not fully utilized. 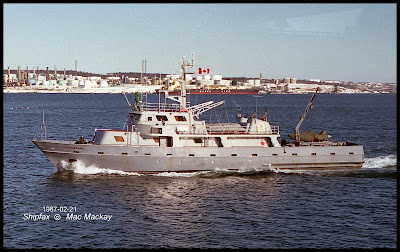 Sister vessel Louisbourg, as delivered, arriving in Halifax at a smart speed. It was painted a smoky grey, much darker than RCN grey, to avoid detection by fishing scofflaws.


Cape Harrison was moved from Newfoundland to the Gulf of St.Lawrence for seasonal operation as a research vessel renamed Louis M. Lauzier in 1983. In 1986 its thirsty 4500 bhp MTU engines were replaced with 2145 bhp V-12 Cummins for a comfortable cruising speed of 13.5 kn.
By this time the Department of Fisheries vessels had been folded into the Coast Guard as the Minister of Fisheries took over CCG vessels from the Minister of Transport. Cape Harrison  and  Louisbourg had thus changed their designation from FPV (Fisheries Patrol Vessel) to CCG.


In 2005 as Louis M. Lauzier was converted back to security patrol work with accommodation provided for three RCMP officers. It was re-fitted with fisheries equipment from Louisbourg.  In 2014 the vessel was replaced on its patrol duties by the Hero class boats (which have their own "weatherability" issues) and laid up in Sorel, QC for disposal. It was renamed 2014-03.

LeeWay Marine was the successful bidder when it was finally sold in September 2015. They quickly renamed it LeeWay Odyssey and sailed for Halifax where it has been based ever since.

Leeway has refitted the boat for its own needs, and it has conducted a variety of survey work. Last summer it worked in James Bay surveying for a new submarine cable. LeeWay has also partnered with Kraken Sonar Systems to deploy sophisticated new survey equipment.

As for Louisbourg it was never converted for research and maintained its original appearance until laid up in Sorel. Renamed 2013-03 it was sold to the anonymous Panamanian Company Marant Corp SA, (with the usual list of phony directors) on May 18, 2015 for $220,000. Under the name La Cristy, it sailed from Sorel October 1, 2015 and has more or less disappeared into the usual Caribbean fog that seems to envelop most ships sold to that region.