The Spliethoff multi-purpose carrier Sampogracht made a brief call at Fairveiw Cove this morning and sailed before noon, heading for Rotterdam.

One of the S2L class ships in the fleet, the 18,321 gt, 23,688 dwt vessel is equipped with three 120 tonne cranes. It is able to protect forest products while loading, using its three side doors, which swing up as awnings. It can carry containers too, which appears to be the case on this trip, with some spent uranium cask containers (likely empty) on the deck forward. 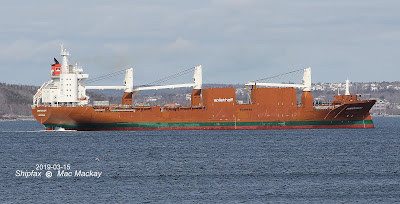 On leaving the Cerescorp terminal in Fairview Cove the ship made a wide turn out into Bedford Basin awaiting the inbound YM Modesty to clear the Narrows.

Once the container ship had turned around the Seaview Point buoy Sampogracht made its way outbound.

Spliethoff converted all their "S" class ships with Alfa Laval Pure SOx exhaust gas scrubbers. It was quite a task to fit them to an existing ship, and it was necessary to build a new enclosure adjacent to the superstructure on the starboard side. A large takeoff pipe from the funnel leads to the scrubber casing and filtered exhaust emanates from the new stack on top. . 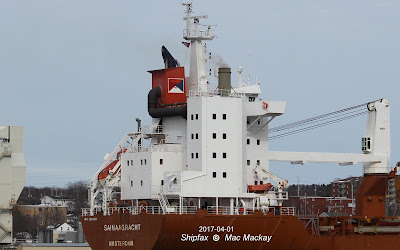 Ship owners are not usually too concerned about aesthetics, but Spliethoff decided to reduce the visual impact of the added casing by painting on false windows. The black fakes are the same size as the real windows and only on close inspection are they revealed to be imposters.

Other scrubber fittings, such as on the Irving Oil tankers and the Nolhan Ava were more difficult to conceal. 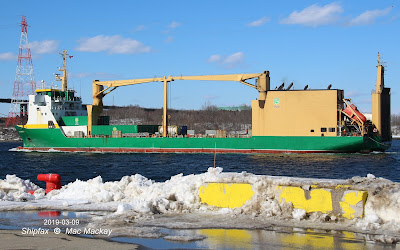 The cement carrier NACC Quebec, which arrived earllier this week also has a scrubber, but it appear whether it is concealed in its odd looking funnel is uncertain.. 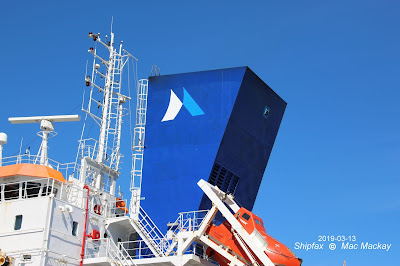 Some ships even have the scrubbers exposed, such as CSL's Spruceglen. 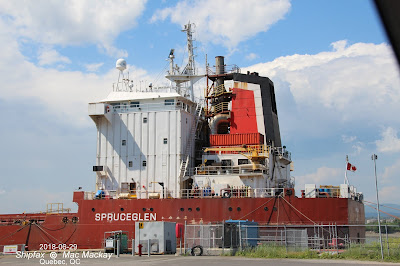 Scrubbers installed when ships are built are almost impossible to detect, except by their vapour plume.

In very cold or very humid conditions, the water vapour dissipates very slowly and remains visible after the ship has passed. The Algoma managed G3 Marquis shown above leaves a trail at least as long as the ship if not longer.

Scrubbers essentially wash the exhaust gas with water. Depending on the salinity of the water it will neutralize Sulphur Dioxide or Nitrous Oxide (SOx and NOx). In fresh water or areas of low salt content, caustic soda is added to the wash water.
With some scrubbers, called open loop, the wash water is released back into environment. This process has been banned in some areas, notably China, over concerns that dilution is not sufficient treatment.
Closed loop scrubbers collect the waste with ceramic or other filters and store it for disposal in port. So far no re-use has been determined for this waste.