Seeing the Light of Day - maybe

An early morning visit to Autoport was intended to get a view of Horizon Highway from the sunny side. Unfortunately my arrival coincided with sunrise and a blaring golden light washed out the colour of the ship from my usual vantage point. Moving to other locations didn't quite seem to capture the essence of the ship as it was partly blocked by construction equipment, Tim Horton's signs, railway tracks or McAsphalt tank trucks. But to paraphrase the adage of one of my early mentors - any picture is better than no picture / and you can always take a better picture.

The land of the rising sun apparently arrived in Halifax along with the ship- even though it is registered in Panama. 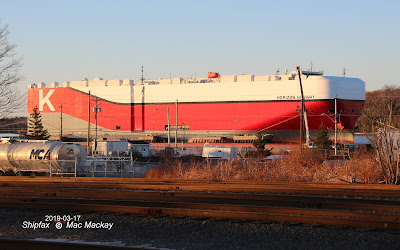 The "new" K-Line RoRo  / Car Carrier livery was the main reason for the visit, so I did manage to capture it despite the busy foreground.

Another vessel that may or may not see the light of day in its entirety is the Defence Research and Development Canada-Atlantic (DRDC) barge that is normally anchored in Bedford Basin off Birch Cove.
It was recently moved to HMC Dockyard for refit, possibly with the intention of lifting it out of the water on the synchrolift. 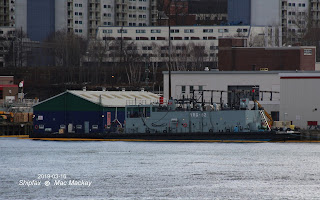 Tucked at HMC Dockyard, with the tank cleaning barge YRG-62, the DRDC barge awaits a refit.


However I hear that the synchrolift is out of commission due to a burnt out lift motor, temporarily trapping HMCS Windsor in the sub barn and preventing Sackville from going in for finishing touches on its major refit. 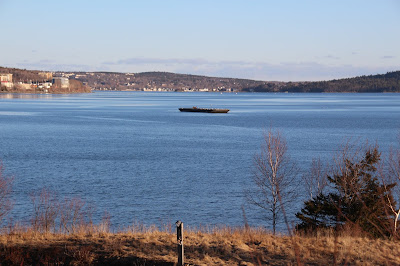 Meanwhile its place in Bedford Basin is occupied by the Dockyard camel YC 600 which is illuminated at night and provides an alternate perch for the resident gull population during the refit.