Good news for Newfoundland ferries has been hard to find in recent months, with continuing woes for some of the government's fleet and heavy ice hampering service for private operators. 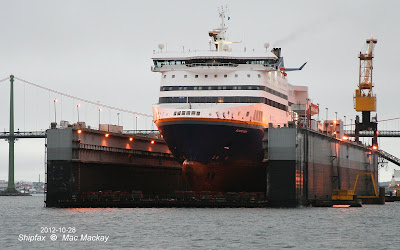 Atlantic Vision, built in 2002, was first chartered by Marine Atlantic in 2008 and has had that charter renewed continually ever since.
With no drydock in Halifax anymore, we don't expect to see the ship on its occasional refits. In the photo the ship is high and dry on the Novadock at Halifax Shipyard.

So it was a bit like good news to learn that Marine Atlantic has renewed the bareboat charter of Atlantic Vision until November 2020 with an option for two more years. The flagship of the fleet is a popular ship and has served well. Although primarily for the seasonal North Sydney - Argentia service, it has operated on the Port aux Basques run too.

Owners Tallink of Estonia may have other plans for the ship after next year, so I hope Marine Atlantic has some options if they can't renew.

Northern Ranger (dating from 1986) has been retired retired, along with the pre-historic RoRo Astron  from the passenger and cargo (respectively) service out of Lewisporte to the Labradfor coast via Cartwright. 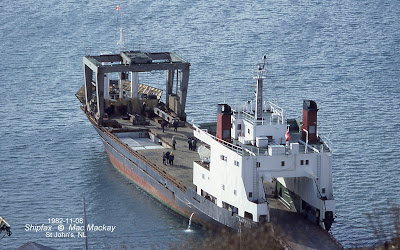 Astron, built in 1971 has operated on the Newfoundland and Labrador coast, but also substituted on the Halifax St-Pierre service (in 1988),  for Atlantic Searoute between Halifax and St.John's (1989) and between Black's Harbour on the Grand Manan, NB. It has also been declared a constructive total loss at least once.

Woodward's newly acquired Saaremaa  Hiiumaa (to be renamed soon) which is in process of delivery from Europe, will start a new Labrador service in June, but not from Lewisporte. Instead it will operate from Goose Bay. It will be able carry passengers and freight on the same boat, something that could not be done with the previous duo. Of course there are always critics, but I wonder how this ship will make out on the Labrador coast.

Woodward's sister ship Qajak W entered service between St.Barbe and Blanc Sablon in January and has had mixed reviews. What may be abnormally heavy ice this year has prevented the ship from operating on schedule, and store shelves on the north shore of the Strait of Belle Isle have run out of many essentials. Emergency delivery of milk by plane has become necessary and other foodstuffs are now coming in from Quebec, at huge added coast.
I don't think it is fair to blame the ferry when even heavy icebreakers can't make way on the Strait.

Newfoundland's coastal ferries continue to be troublesome. Veteran now needs a new engine and had to be removed from service, with sister ship Legionnaire transferred from Bell Island, filling in, but it had issues too. Without ferry service for a week airplanes had to be chartered to serve Fogo Island.  The Damen built ships have been lemons by all accounts and they have not solved Newfoundland's problem of aging and decrepit ships.

When Legionnaire moved to Fogo Island it left the aging Beaumont Hamel (with no serviceable elevator) and Flanders to cover the Bell Island route.