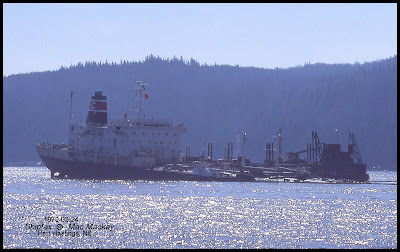 On March 15, 1979 the tanker Kuridistan broke in two off Nova Scotia while loaded with crude oil. The incident resulted in one of the largest salvage operations ever undertaken in Nova Scotia, and a review of ship construction and steel design.

The bow section of the ship contained 7,000 tons of oil, all of which was lost, and the stern 16,000 tons most of which was recovered. Nevertheless the spill that came ashore, some in ice, some floating below the surface effected 700 miles of shoreline and did untold damage to wildlife including fish stocks. Oil continued to wash ashore for six months and the cleanup effort was extensive. Some of the oil was spread about by the Nova Scotia current and dispersed at sea where it could not be recovered.

The spill was not as large as that of the Arrow which struck a pinnacle and sank in Canso Strait in February 1970. It spilled about two thirds of  its cargo of  16,000 tons. Therefore the Kurdistan incident has to take second place among tanker sinkings in Nova Scotia waters.

The tanker itself had a a bit of a controversial history. It was built in 1973 by Swan Hunter's Hebburn yard and named  Frank D. Moores, after the premier of Newfoundland. It was owned by Nile Shipping Co Ltd, managed by Common Brothers Ltd and built for a charter to Shaheen Natural Resources, the developer of a refinery in Come-by-Chance, NL. When Shaheen was declared bankrupt in 1976, the charter was ended, and a new charter arranged with Golden Eagle Refining of Quebec. [Both refineries still exist but with different ownership structures.]

Kurdistan had loaded bunker C oil at Point Tupper for transport to the Golden Eagle refinery in Lévis and sailed to the Cabot Strait. Soon after encountering ice, the the hull began to crack and within a very few hours the ship was abandoned by the crew and several family members. CCGS Sir William Alexander took them all aboard except the master who was finally evacuated by helicopter. From the initial  hull cracking, reported at about 0425 hrs, through the evacuation at 0830 hrs the ship's condition continued to deteriorate until it broke in two at about 2200 hrs. 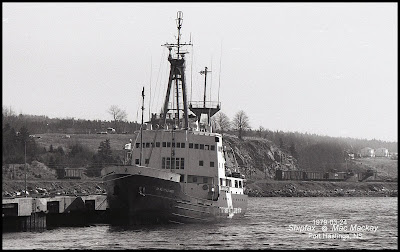 The Halifax built CCGS Sir William Alexander (i) evacuated the ship's company and stood by the salvage operations.


Tugs from the Strait of Canso and Halifax were scrambled to assist but there was little that could be done with the ship's bow. It was taken in tow out of the ice area, but it became increasingly unmanageable. On March 28 the tow line to the tug Point Gilbert parted and CCGS Alert, which also had a tow line, cast off its line. On March 30 HMCS Margaree sailed out of Halifax and on April 1, 200 miles off Halifax, sank the bow with gunfire..

Also a Halifax built ship, HMCS Margaree was called upon to dispatch the bow section.

Tugs had also secured the stern section for towing and it was taken back to the Strait of Canso and anchored in sheltered waters quite close to the Canso Causeway off Port Hastings. A major flotilla of support craft attended the tow in on March 23. Lead tug Point Valiant was assisted by Point Viking. Point Carroll (port side) and Point Valour (starboard side) prevented the tow from yawing. CCGS Louis S. St-Laurent, CCGS Edward Cornwallis (i) and CCGS Sir William Alexander attended. 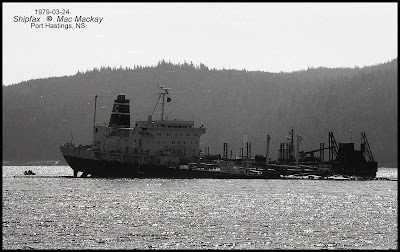 More patching took place and once its remaining cargo was lightered off Irving Birch towed the hulk to Saint John, arriving April 14, where it was drydocked for more repair. 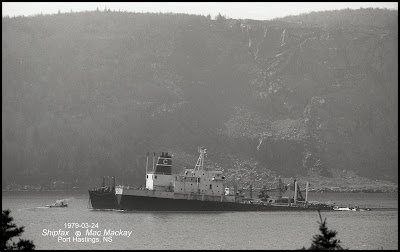 On June 2 the British tug Guardsman took the stern section in tow, arriving Ijmuiden, Netherlands June 26. A new bow section was fitted in Amsterdam and the ship sailed again November 29 with the new name Simonburn. The ship saw several years of service, under two subsequent names, Aura Bravery from 1982 and Seabravery from 1986. It eventually arrived in Alang, India, June 13, 2000 where it was broken up for scrap,

In subsequent investigations it was found that the stress of heated oil on very cold steel, coupled with some faulty welding from previous repairs was the root cause of the hull cracking. Ship designers have since taken this into account, and the advent of double hulls has lessened the risk of a repeat. Use of high tensile steel, to reduce weight, has also been revised. 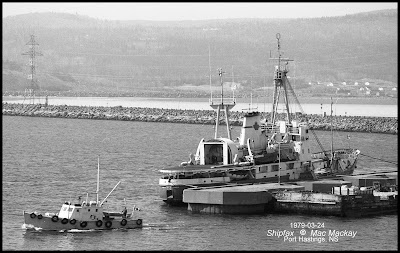 
While the Kurdistan was the most memorable event of spring 1979 it was not the only casualty.

Among the others:
On March 2, the tanker Marilia, loaded with Venezuelan crude, was also bound for the Golden Eagle refinery in Lévis when its bow was pierced by ice in the Cabot Strait. There was no oil spill, but the ship diverted to St.George's Bay for temporary repairs. It then backtracked to Halifax, arriving March 16. CCGS Sir William Alexander had also stood by this ship, but was called away to the Kurdistan.

A deeply laden Marilia begins to lighter off its cargo to the Golden Spray in number 5-6 anchorage in Halifax. Note the lack of oil boom.

On arrival in Halifax Marilia met with the tanker Golden Spray which had been outbound from the St.Lawrence in ballast at the time. A cargo transfer took place in the anchorages and Golden Spray sailed March 18 for Lévis with the crude. Marilia, once repaired, returned to service.
Built in 1967 by Gotaverken, Gothenborg as Beauval, the tanker measured 48,429 gt, 85,750 dwt. City Marine Inc acquired the ship in 1978 and registered it in Liberia as Marilia. It lasted until 1984 when it was broken up in Nantong.
Golden Spray was a much larger ship at 63,573gt, 121,185 dwt, built in 1966 by Kockums MV, Malmo as Sea Spray for Salén. It was registered Panamanian as Golden Spray in 1976 and surprisingly was broken up in Kaoshiung in June of 1979.


Also while all this was going on the Danish Partner-Ship was in trouble off Cape Race on March 19. I don't have details at hand about exactly what occurred but the ship was taking water although it had no holes below the waterline. Due to a lack of tugs in the area - many were tied up with the Kurdistan - it was taken in tow by HMCS Assiniboine and arrived in Mulgrave March 20. 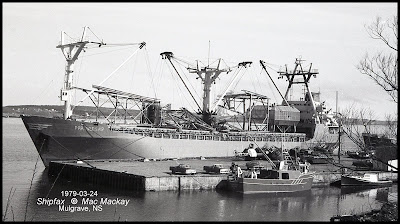 Partner-Ship safely tied up at Mulgrave.

Partner-Ship was carrying an oil rig derrick on deck, and it appears that part of it collapsed, possibly holing a hatch cover or the deck itself. The load was apparently re-secured and the ship went on its way.
Starting life in 1975 at Santierul  Naval Galati in Romania. the 4998 gt, 8299 dwt ship carried the name Frendo-Partnership from 1975 to 1977. Sold in 1981 it was renamed Mari Elena under the Venezuelan flag and broken up in Brazil in August 1988.
The ship was ice strengthened and fitted with two 22 ton and two 12 ton derricks on elaborate masts, over large hatches, suggesting that it was built for specialized loads. Note the enclosed crow's nest mounted low on the foremast, perhaps used as a conning station when visibility from the bridge was restricted by deck cargo.

To add to the shipping woes most of the Marine Atlantic ferries were stuck in ice for varying periods. Marine Atlantica was trapped for two and half days.