Viking Sky - cruise of a lifetime

The Viking Ocean Cruises ship Viking Sky gave its 915 passengers and 458 crew the scare of a lifetime last week-end off the Norwegian coast. The ship, which called in Halifax three times in 2017 (but was never photo'd by Shipfax) lost power March 22-23 on all four engines in 38 knot winds and 8 meter seas. 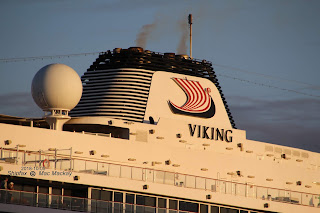 Sails might have come in handy for Viking Sky.
This is the funnel of sister ship Viking Sea that called in Halifax in 2018.

It was perilously close to shore and drifting in severe conditions. The ship was also rolling heavily and uncontrollably, several windows were broken , water was sloshing about and some passengers had been injured.

The decision was made that the passengers had to be evacuated, and the only way to do it was by helicopter. The Norwegian Coast Guard had five helos available and Denmark contributed some more, and the hair raising process began.

Meanwhile tugs were on the way and finally managed to get the ship under control and headed for the port of Molde. By the time the ship was out of danger 416 passengers had been transferred to shore.

The painful process of lifting them from the rolling ship, in dangerous conditions, usually one at a time, over several hours, did not manage to retrieve even half the passengers and some of them were injured in the process.

Vking Sky, a new ship in 2017 supposedly had complete propulsion redundancy, with two separate engine rooms with two engines in each. In theory if one bank of engines failed the others would surely still be operational.

Reports indicate that due to high seas, cooling water intakes, which are submerged well below the water line in normal conditions, were sucking air and as engine temperatures rose, they shut down automatically.
Once that happened things only got worse. As the ship began to roll out of control, it was not possible to restart the engines since there was no consistent supply of cooling water. It is also possible that severe damage had already been incurred by the engines if the engineers had tried to overide the cooling alarms.

One can only imagine the response to such an incident in our own waters in hurricane season. Do we have five helicopters available on short notice, and Emergency Towing Vessels available to bring the ship into port? Answer: no. How close to land would the ship have to be in order to evacuate even half of the passengers in an emergency?


It may soon be forgotten, but a small cargo ship, that was near the Viking Sky tried to make its way to the scene to be of assistance. Unfortunately its cargo shifted and it began to sink. All nine crew members had to be rescued too, some with serious injuries. While this took some of the resources away from the cruise ship, it was still in the best traditions of the sea, to take risks to assist others.

In a similar situation off Nova Scotia, the proximity of other resources whether official or not, would the critical factor in potentialy saving lives or at the very least getting injured people ashore for treatment.

Emergency Towing Vessels are needed not just for broken down tankers, but for any kind of ship that is in difficulty.