A sunrise arrival today was CCGS Louis S. St-Laurent a fairly rare sight in Halifax in recent years after its political transfer to Newfoundland. Whether the ship was actually escorting the Icleandic Lomur (see yesterday's post) can't be confirmed, but that ship arrived a very few minutes later. There was no damage visible to Lomur from a great distance, and the containers I could see appeared intact. 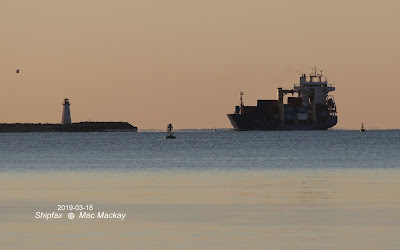 The Louis S. St-Laurent had been on ice operations in the Cabot Strait, and tied up at Irving Oil in Woodside. Ice has retreated dramatically from the Nova Scotia coast in the past week thanks to warm temperatures and favourable winds. While there is still considerable ice in the central Gulf, even that is diminishing rapidly. After the Louis had been tied up for a while it was time for the departure of USCG Seneca WMEC 906 that had been in port since Friday at HMC Dockyard. There are often US vessels in port to commemorate important historical dates, but I can think of none this time. Maybe St.Patrick's day? If so at least some of the 100 strong complement were able to stand on deck for the departure. 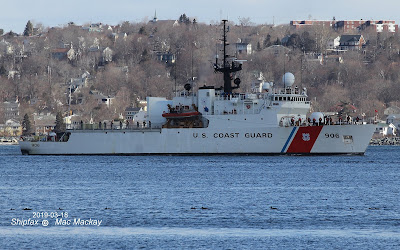 Seneca is based in Boston, but gave Portland, ME as its last port of call before arriving here.
A member of the Famous class of Medium Endurance cutters, it was laid down in 1982 and launched in 1984 by the Robert Derektor Shipyard Inc in Middletown RI. It was in service in 1986, but not formally commissioned until 1987.  Despite their age, the Famous cutters are expected to remain in service until the 2030s, thanks in part to the transfer of weapons and equipment from decommissioned Oliver Hzard Perry class frigates.