Saturday in the port

The Canadian flag Nolhan Ava arrived today on its first return trip since it began using the Cerescorp container terminal in Fairview Cove. It was a very short trip since the ship only left Halifax on Tuesday. The ship serves St-Pierre et Miquelon for TMSI and it was recently announced that it would also be calling in Argentia, using a new crane there.

However there was certainly not time for the ship to have made that loop since Tuesday. On arrival the ship also took the tug Atlantic Willow as tethered escort, indicating that it had some sort of problem, perhaps related to steering. That would not be surprising if the ship had a run in with ice. The Gulf ice has now spread well out from the Cabot Strait into the Atlantic and down the Nova Scotia coast to 45 degrees North Latitude

Shipfax predicts a repeat of 1987's ice clog in Halifax for next week. More on that when it happens!
Marine Atlantic predicts trouble next week when the wind forces the ice into Sydney harbour.

Not having trouble with the ice, or anything else, the substitute pilot boat  Capt. E.T.Rogers (ex Chebucto Pilot) has been performing well since it was brought back from Saint John to cover for the poorly performing Scotia Pilot and Nova Pilot. As a casual observer, I think it is able to work in conditions that the other boats were not. There have certainly been fewer suspensions of pilotage operations since it came to work. 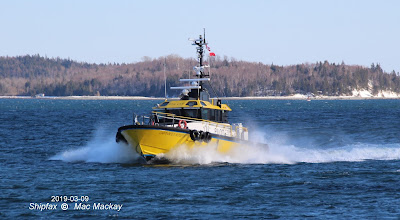 Capt. E.T.Rogers comes splashing in to port and into a head wind.That wind is all that is keeping the ice offshore -so far.

Last Sunday's arrival, HOS Renaissance sailed today, and as predicted gave a destination of Portsmouth, NH, where fibre optic cable is manufactured in nearby Newington.  If it fitted any special cable handling equipment while in Halifax, it was not visible.. All that it seemed to be carrying was a deck load of snow picked up in Monday's snow storm. 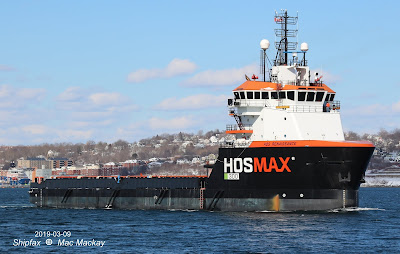 Also arriving today MOL Partner, after re-joining THE Alliance's EC5 roster of ships. With the Yantian Express fire, the line had to find ships to take up the slack, but with service changes in the port rotation, there have also been other ships added and removed. The "new" ones will start to show up in the next few weeks.