Horizon Enabler to the rescue

The offshore services vessel Horizon Enabler has been tasked with restoring vital communications links with Greenland. The ship returned to Halifax December 26 from another cable repair job and all the cable gear was removed and landed at IT Telecom.

Horizon Enabler had a brief layover in January at The Cove (former Coast Guard base) in Dartmouth.

Then on December 28 there was a fibreoptic cable break near Greenland, apparently in 3,000 meters of water.  The Greenland connect cable that runs from Milton, NL to Nuuk then goes to Qaqortoq and on to Landeyjarsandur, Iceland. The break occurred close to Qaqortoq in the Iceland section.

On January 21 another break was detected in another local cable running north.

Horizon Enabler was hired and moved to pier 9C on January 31 to be fitted out all over again, but with extra equipment for the two projects.  It sailed February 4, initially for Fortune Bay, NL (possibly for another repair job.) On completion of that work it stopped in St.John's, NL and sailed March 1. It is due to arrive off Nuuk March 6.

When the ship is outfitted for cable work, it takes portable workshops built into shipping containers, and a variety of equipment to haul cable over the stern. The most visible of this equipment is a "slide"  similar to that used on longliners for deploying nets. 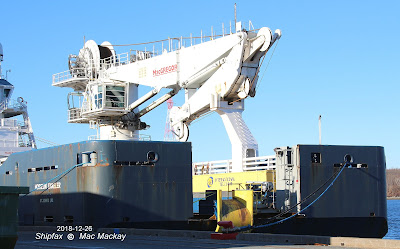 The yellow device overhangs the stern and is used to haul and deploy the cable. The yellow and blue container on deck is one of IT Telecom's portable repair workshops.