Controversies about ferries are nothing new in Nova Scotia, which has a small Provincial Government service that is part of the highway system and three four "extra provincial" operations.

The Department of Transportation and Infrastructure Renewal operates seven ferry routes in Nova Scotia, four of which are cable ferries and four are self-propelled. All have had their share of issues over the years, but this year two seem to have made the headlines. Prime among these is the Englishtown to Jersey Cove cable ferry in St.Ann's Bay, Cape Breton. Engineering issues with the landing ramp sidelined the ferry for ten months last year and since it resumed service in October 2018, the Province has waved the $7.00 fare in order to lure customers back. An estimated $2.9 mn repair to the ramps escalated to $3.8 mn and resulted in the longer shutdown. And the work isn't completely done yet. Some of the work may have to be re-done since cars were bottoming out due to the slope of the ramp.

It is reported to be the busiest of the Province's cable ferries, but also the shortest route at - wait for it - 410 feet, with a voyage duration of 2 minutes. 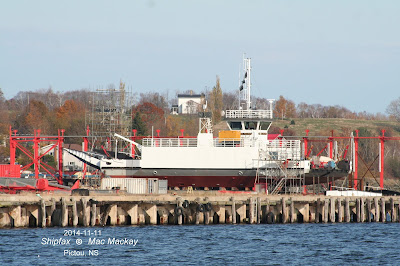 Torquil MacLean during its 2014 refit in Pictou.

The Englishtown route is served by the ferry Torquil MacLean. That vessel has had its fair share of controversies too. Built in 2007 by A.F. Thériault in Meteghan River as Angus MacAskill II it underwent a major overhaul in 2014 that started out at $776,000 but increased by at least $280,00 before it was done.

Another cable ferry, this one on the Nova Scotia mainland, also made the headlines this winter when it stranded passengers and crew for eight hours after a mechanical breakdown. The La Have ferry crosses the river of the same name and when its bull wheel fractured February 11, the boat came to a halt 200 meters from shore.
It was not until a Coast Guard Vessel came to their aid that the boat was able to reach shore and offload its eight passengers, their vehicles and three crew. The bull wheel is the device that picks up the cable and advances the boat along its length. The ferry has no alternate means of propulsion. A ferry on the same route went adrift in an icy storm in January 2014 and eventually ran ashore. Its one passenger and two crew were rescued by Zodiac.


In the latest incident repairs took some time and the ferry has also been delayed by ice. The boat in question was Scotian built in 1983 by Ferguson Industries in Pictou. It is not the usual boat on the service. That is the Brady E. Himmelman which was off the route for refit. Scotian often moves around to different routes a substitute vessel, and in fact filled for Torquil MacLean during its 2014 refit, but was plagued by hydraulic and other problems during its tenure.

The bigger story for Nova Scotia of course is the Bay Ferries Ltd service connecting Yarmouth and Maine.
After a lengthy history of off again, on again, failed operators and changing ships and routes, it appeared that things were going too settle down in 2016 when the Province signed a ten year deal with Bay Ferries to resume sailings between Yarmouth and Portland, ME. Bay had leased a high speed catamaran vessel and resumed sailing in June.

BFL marketed the new service as The Cat,  the name used in the previous service which was abruptly cancelled when a  previous Provincial government refused to pay subsidies.  There had been no service to the US from Yarmouth since 2009* [see correction below] with devastating effect on tourism in the area, and everyone realized that it would take time to build ridership again. It had increased to more than 50,000 in 2018 but that was still below desired levels.

While the new Nova Scotia government was keen to get the service up and going the State of Maine and the port of Portland were less enthusiastic. Their opinion seemed to be that without the ferry tourists would just stay in Maine. With a ferry however they were more likely to drive right through Maine and not leave any of their money behind.

Continued issues with the condition of the Portland terminal, and Portland's desire to have cruises ships, not ferries,  finally ended up with BFL pulling the plug on Portland and signing a five year $1.3 mn lease with Bar Harbor, Maine for the US terminus, starting in 2019. The traditional US landing spot for CN Marine and Marine Atlantic's Bluenose ferry service, it had also been used by Bay's first Cat service.

However controversy erupted again when the Province refused to release financial details on BFL's management fee, citing the need for commercial confidentiality. The loyal opposition decided to sue the Province to get the information, and that is still in court. BFL got about $10.9 mn in 2018, but NS may have paid more to cover losses.

It was also revealed the the Province is paying to upgrade the Bar Harbour facilities to the tune of $8.5 mn, including the cost of salaries for US Border officials. Renovations to the terminal building are needed after ten years of idleness, and the docking facilities will need modification for the current ship.
A floating landing stage used in Portland will be towed to Bar Harbour to make the ship to shore transition.  Because of these changes The Cat will delay its  start up until June 21 at the earliest. They hope to be able start service on Memorial Day in 2020.

Upgrades are always being made in Yarmouth too, and those costs have not been mentioned lately.


The ship used for the BFL service is officially called HST-2. Leased from the United States Maritime Commission, it is the former USNS Puerto Rico and Alakai. Built in 2007 by Austal USA in Mobile, AL, it operated a ferry service between the Hawaiian islands of Oahu and Maui. When that service was discontinued in 2010 (another controversy) the ship was auctioned off and purchased the the US Department of Transportation's Maritime Administration (US MarAd). In 2012 they transferred it, and a sister ship to the US Navy for troop and equipment transport. It was renamed USNS Puerto Rico to be operated by the Military Sealift Command (US MSC). 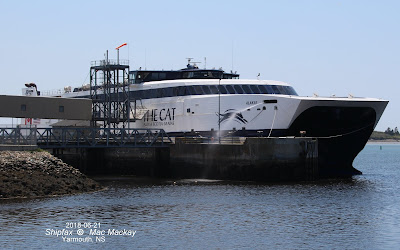 However it was little used and in 2016 US MSC renamed it HST-2 and chartered it to Bay Ferries Ltd. Upon starting the charter however it reverted to Alakai and that is the name painted on the bow.  It remains registered in the United States under the ownership of US MSC.

Although Nova Scotians receive a discounted fare, once aboard ship, all transactions are in US dollars.


It can reach 35 knots, and is likely to cover the Yarmouth to Bar Harbor route in  3.5 hours.  Issues with the damaging wake from the previous high speed Cat forced slowdowns in Bar Harbour itself. Although the ship's route is south of the Bay of Fundy right whale protective zone, I expect there may be speed reductions required depending on whale sightings.


* CORRECTION
Thanks to a reader the error in this statement was brought to my attention.

Nova Star Cruises operated the ill-starred Nova Star ferry betwen Yarmouth and Portland in the summers of 2014 and 2015. The heavily subsidized service fell short of projected ridership and the company filed for bankruptcy in April 2016 with debts in excess of $15mn. It had received $39.5mn in subsidies.
The history of that ship and the service was covered by several posts in Shipfax between 2013 up until 2015 when the Province cancelled the deal.
Enter "Nova Star" in the search box on the left to read that sad story.