As summer is now here (even if the weather has not been told yet) Canadian ships that flag out for the winter are returning to Canadian registry. In the past few weeks several Transport Desgagnés, Logistec and Coastal Shipping vessels hoisted the maple leaf again after working overseas for the winter. Some of these ships are now preparing to go north on the annual "sealift" to remote communities and industries. Others will be staying in more southern latitudes, and resuming trades that may be restricted in winter due to ice.

Some of the ships dock in Halifax for the reflagging process, and that is what I expected when Acadia Desgagnés was posted for an arrival today, June 24, however that is not the case. 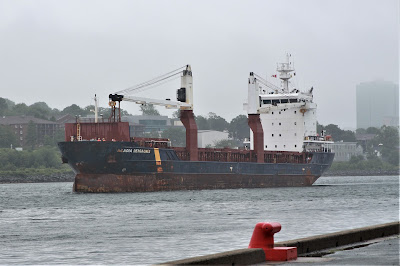 Instead the ship docked at Pier 9C to offload some cargo from Airbus in Belfast, Northern Ireland for Bombardier. Normally aircraft components such as wing and tail sections and fuselages arrive on ACL ships (via Liverpool) and are rolled off at Fairview Cove. They are then trucked to Mirabel, QC or Downsview, ON. Recently however they have also arrived at Pier 9C on car carriers. It is unusual that they would arrive on a general cargo ship, requiring the ship's cranes to lift off the units. 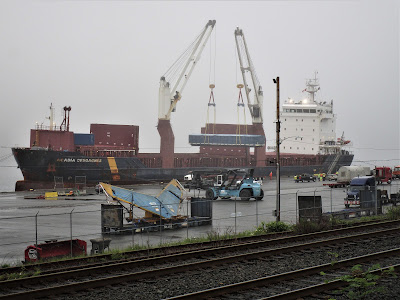 An array of aircraft parts were unloaded with trucks at the ready to move them on the dock or to truck them away directly.

Acadia Desgagnés was built in 2013 by Shandong Baibuting Shipbuilding Co Ltd in Rongcheng, China. It was launched as Montelena, but the name was changed during construction to BBT Ocean but was changed again on delivery as Sider Tis. It initially flew the flag of Panama but that was changed to Malta in 2014. Transport Desgagnés took delivery and renamed the ship in Ravenna, Italy in March 2017 and it arrived in Shelburne, NS April 30, 2017. It was then refitted for Canadian service and registered in St.John's, NL, May 12, 2017. At 7875 grt, 11,353 dwt it has box shaped holds and a pair of cranes rated at 40 tonnes. The holds are reinforced for heavy cargoes, and unloading by grabs, and it can carry 164 TEU on deck. It is rated as ice class 1D by Lloyd's which is the lowest ice class rating.

The ship is used in bulk trades around the Gulf of St.Lawrence, such as salt from Pugwash, NS, and does not mormally participate in northern supply work.

It called in Halifax in May 2018, April 2019 and May 2020 to reflag but this year it will proceed to Montreal instead. Why it did not unload the cargo there is a mystery.