It is always good to see ships that are new to Halifax, but there are many ships that come to Halifax often and become regulars. Usually the repeaters do not attract much attention but sometimes their visit is worth noting.  Today (June 8)'s arrival of CSL's Baie St. Paul sees the return of a familiar ship, but its call may be worth a mention. 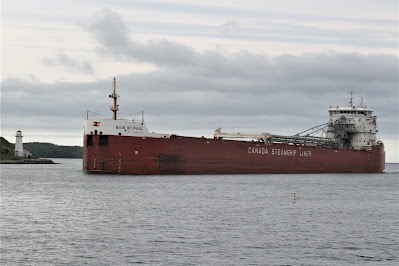 On its way inbound late this morning the Baie St. Paul took the photographically preferrable route west of George's Island on its way to the Gold Bond Gypsum dock in Bedford Basin.

The 24,430 gt, 37,690 dwt ships was the first of CSL's Trillium class self-unloading bulkers, built in 2012 by Chengxi Shipyard in Jiangyin, China. Initially intended for Great Lakes and St.Lawrence Seaway trading, it was later strengthened in order to make "short sea" voyages outside the confines of the Gulf of St.Lawrence to Nova Scotia and Newfoundland. At the same time it began to carry salt loads out of the Magdalen Islands and to work well into the winter season to meet demand in upriver ports such as Montreal.

Included in those salt cargoes was four loads for Halifax landed at Pier 9C last year. See previous post at: September 20, 2021 . Approximately 100,000 to 150,000 tonnes of the material was stockpiled against the possibility of a disruption in supply from the Pugwash salt mine, which is the usual source for winter road salt in mainland Nova Scotia. (The same Shipfax post also explains the significance of the ship's name).

Now that CSL has taken delivery of a new purpose-built salt carrier called Nukumi (see previous posts at: March 27, April 6 and April 30), Baie St. Paul has returned to more traditional cargoes such as coal, aggregates and ore. In fact the ship is arriving today from Charlottetown where it delivered a load of construction aggregates from Auld's Cove, NS. That is a convenient run as the ship is built to Seawaymax dimensions, as is the Canso Lock, making it a short run along the Northumberland Strait to the PEI capital.

Salt is a notoriously destructive cargo for ships, so returning this ship to carrying less damaging materials should add a few years to its working life.

Recent loads of gypsum from Gold Bond to Canadian ports have been going to Hamilton, ON, although several other ports between here and there may also have demand for raw gypsum ore.

The container carrier MSC Lucy arrived again today on the Mediterranean Shipping Company's Indus 2 service from north India. In my last post about the ship (see March 27 ) I  regretted that I could only get a "going away" photo instead of the better "arriving" view. So I stirred myself this morning to be on scene when it made its way in to PSA Halifax Atlantic Hub, Pier 41. 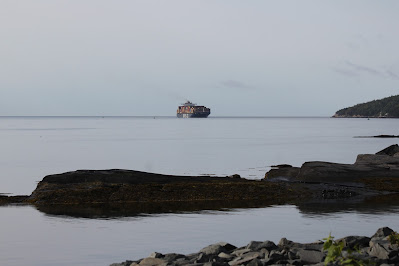 The ship, which certainly appeared to be deeply loaded, took the western, deepwater, channel and used a tug as tethered escort astern. It was then met by two more tugs in the Middle Ground between Maugher's Beach and Ives Knoll. 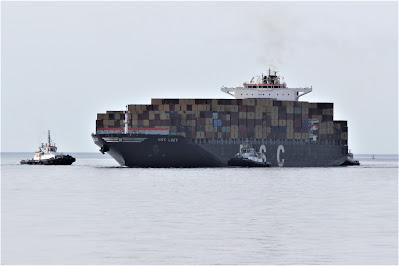 MSC seems to be doing good business on the Indus 2 service, with some of the orginal 8,200 TEU size ships now being replaced with larger ones. I am not sure they could squeeze too many more boxes aboard this one, so more capacity may be on the way.