Most ships that load aggregates at Martin Marietta's Porcupine Mountain quarry at Auld's Cove, NS (adjacent to the Canso  Causeway - and the source of the rock for that structure) come and go without bothering with Halifax.In the case of the SLNC Severn however, the ship seems to like Halifax and has been here at least four times in the last year or so. 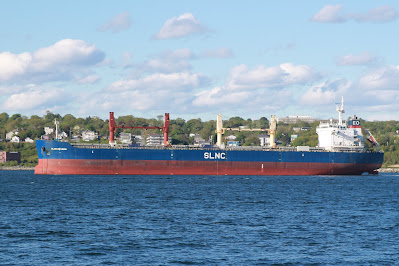 Each time it has been here I have essentially repeated the basic facts about the US flagged ship.It is  owned by Oldendorff America and has been bareboat chartered since 2020 by Schuyler Lines Navigation Co LLC of Annapolis, MD. It was built in 2017 by Samjin Shipbuilding Industries Co in Wehai, China as the Frederike Oldendorff. Measuring 33,737 gt, 57,888 dwt it is equipped with four 35 tonne capacity cranes and four 12 cubic yard grabs.

There is a huge demand for construction aggregates in the US, which the ship supplies, but it has also travelled widely. Recent ports include Dakar, Sengal, Tyssedal, Norway and Vlissingen, Netherlands. The ship has also delivered aggregate to Ascension Island. (SLNC also has a regular cargo ship service to Ascension Island from Jacksonville, FL, and supports a US military base there.)

On sailing this evening, the ship was kind enough to use the western sidee of the harbour and pose for a very nice photo. 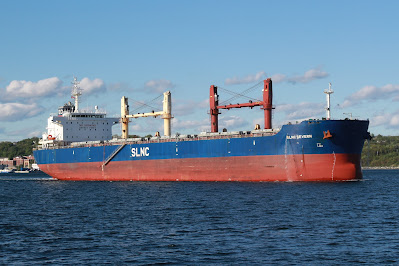