MOL Maestro arrived this afternoon, June 3, and docked at PSA Fairview Cove. It is on THE Alliance's EC5 service, and is eastbound. Oddly it is the second EC5 eastbound caller this week. The other one, on June 1 (see a previous post) was MOL Charisma, but it docked at PSA Atlantic Hub (south end terminal). 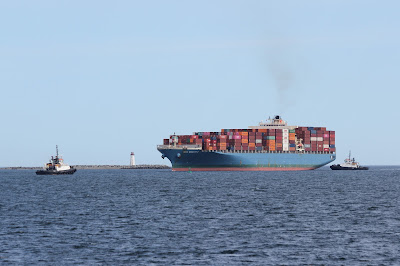 Tugs met the MOL Maestro to escort it through the Narrows to Fairview Cove. 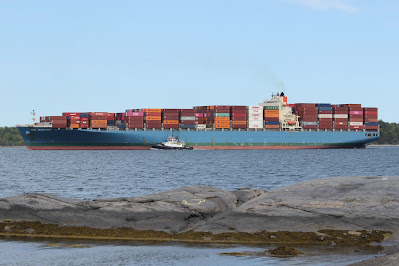 Although MOL Maestro is a sizeable ship, the previous caller was somewhat larger at 86,692 gt, 90,390 dwt, with a capacity of 9060 TEU, including 630 reefers, which may explain why it did not go on to Fairview Cove. PSA is directing larger ships to the southend facility where there are no air daft restrictions and no narrow channels. In addition, today the Atlantic Hub had other ships scheduled, namely Oceanex Avalon And the ZIM feeder Contship Leo which would have been using most of the cranes. 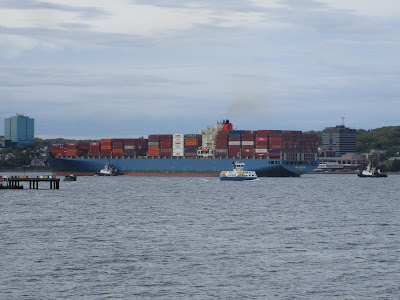 MOL Maestro lines up for the Narrows after working is way past harbour ferries and tourist craft. Tethered escort Atlantic Oak trailed astern on a long line for braking and steering. Atlantic Fir was working forward.