MSC for Fairview and No Moth

1.   With the rationalization of services underway, PSA Halifax is shifting some traffic from the southend PSA Atlantic Hub terminal to PSA Fairview Cove. The top off /drop off of containers for MSC ships using the St.Lawrence River is one of the functions to be moved. Those ships do not require the big cranes at the southend nor do they have airdraft issues with the  bridges, since they are (relatively) smaller ships. 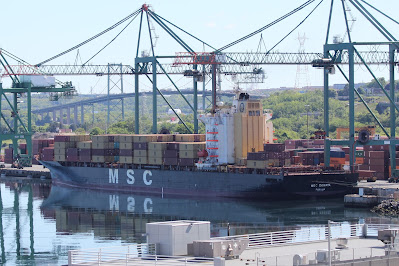 Today's arival is MSC Donata on the CanEx 1 service from the Mediterranean. After off-loading enough cargo to reduce draft to St.Lawrence River requirements the ship will sail to Montreal. The ship was here on March 20 of this year when it docked at PSA Atlantic Hub, (southend terminal).

2.  An interesting caller occupied an inner anchorage for a short time this morning. The Panama flag Eagle arrived at anchor off Halifax yesterday, but waited until this morning to enter port for CFIA inspection. 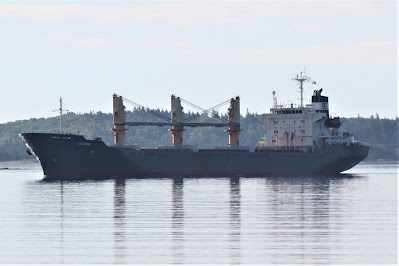 It then followed the Oasis of the Seas and proceeded to the inner harbour. It did not take long to be inspected and cleared to sail. 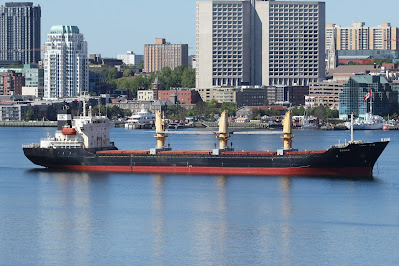 The ship was built in 2001 by Shikoku, Takamatsu, Japan and is a smallish bulk carrier of 11,194 gt, 18,320 dwt, fitted with three cargo cranes.  It sailed orginally as Auguste Oldendorff and was renamed Beagle VI in 2006 and Eagle in 2019. Its funnel mark, represents the Piraeus based Beatrix Enterprises and shows a letter "B" in reverse joined to a letter "E". This is very similar to the "OE" it would have carried as an Oldendorff ship.

The Eagle is headed for Montreal where it is due to be inspected for compliance with St.Lawrence Seaway regulations and will then procced to Hamilton, ON. (It may require installation of certain equipment as a first time user of the Seaway.)