The year 2007 must have been a good one for shipbuilders - we have seen several ships of that vintage in the past few days. Most of those ships have had more than one name so far in their careers. That is hardly surprising as the proliferation of investment syndicates was in full swing before the economic bust of 2008. Those investors were prepared to put up their money to finance ship construction on the strength of a charter contract, usually in the five to ten year range. When the charter was up the ship had to find other work, so was often chartered to another operator or put on the spot market. In any event an identifiable "brand name" was not wanted by a competitor so a change had to be made. It was also common for the orginal investor to "cash out" or even for the charter company to purchase the ship. 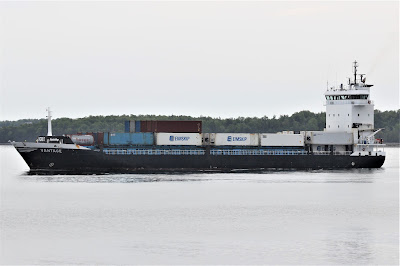 Therefore it was interesting to see a ship arriving this morning (June 11) still carrying the name assigned to it when built in 2007. Vantage was built by the VeKa Bijlsma shipyard in Lemmer, Netherlands to the builder's Confeeder 350 class. Measuring 3871 gt, 3650 dwt the gearless ship can carry 124 TEU in the hold and 230 TEU on deck, totalling 354 including 100 spots with reefer plugs. [These are nominal TEUs, as the capacity is only 228 TEU at 14 tonnes]. As a modern feeder ship it is also structured to carry 45 foot containers.[Is that a 2.25 TEU? - not sure].

Of interest is the presence of the shipbuilder's name on the breakwater - something I can't recall seeing before. It may be there because this was the first built of the Confeeder 350 class. [VeKa comes from the family names of the company founders, VErsluis and KApel]. 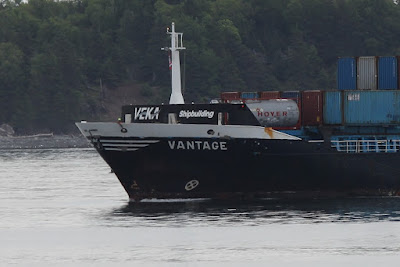 A notation in the ship's listing in most sources says the ship was completed at the Bijlsma yard, indicating that its hull was built elsewhere - I believe in China. VeKa is Europe's largest builder of inland vessels and commonly has those hulls built in foreign yards and completed in the Netherlands.

Vantage arrived in Halifax westbound for Eimskip on the company's Green Line service from Reykjavik via Halifax to Portland, ME and return (eastbound) via Halifax, Argentia (and St.Anthony seasonally). The route also serves as a New England feeder service out of Halifax for CMA CGM avoiding possible congestion in New York / New Jersey.

Straying from the specific topic of the Vantage:

Eimskip is a large reefer user and most are 45 footers, which have become the standard for road transport.

Stacks of 45RTs (45 foot long containers) at PSA Halifax form a backdrop to an Oceanex 53 footer.
Oceanex's services from Montreal and Halifax to Newfoundland remain among the few shipping lines that carry 53 foot containers. [Although I expect that US lines to Puerto Rico, Hawaii and Alaska must carry 53 footers by now.]
Railways have been carrying 53 footers in North America for many years, but are now adapting to 60 foot "cans" pioneered in Canada by the Canadian Tire chain of hardware, general merchandise and auto parts stores. [Non-Canadians may not be aware that this iconic brand sells very few tires in comparison to all its other wares. It also sells gasoline and repairs cars.It has 667 stores coast to coast] 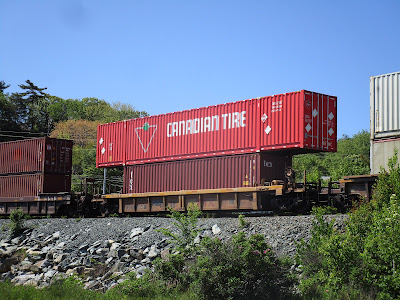 The thought of 60 foot containers rolling down the highways may throw fear into the hearts of the brave, but they are coming and the world will adjust, just as we did for 53 footers. They really aren't that much bigger - are they?