I have been neglecting navy news for the last few days simply because there was so much other shipping activity in Halifax Harbour.

The week started off on Sunday, June 26 with the sailing of two RCN ships for a four month tour of duty with NATO's Operation Reassurance in the North Atlantic and Baltic Sea. Both are coastal defence vessels that can do a wide range of work depending on which of several equipment modules they are carrying. Their principal duties however relate to mine countermeasures.

HMCS Kingston will be deploying an autonomous underwater vehicle and HMCS Summerside will be carrying a clearance dive team.

Kingston MM 700 is the lead ship of the class of twelve vessels, built by Halifax Shipyard. It was launched August 12, 1995 and commissioned in 1996. 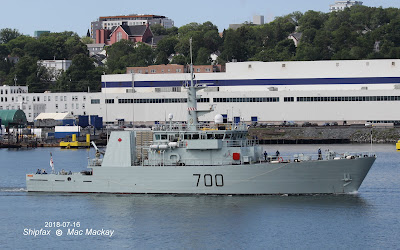 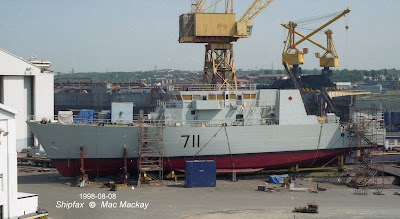 Altough difficult to see in the above photo, the ships are powered by diesel electric driven azimuthing stern drives (Z-drives) which give them manoeuvrability similar to harbour tugs.

Two frigates currently assigned to NATO, HMCS Montreal and HMCS Halifax are due to return to Halifax in July. Other ships are doing training or working up for future assignments. One ship has been exercising in near waters off Halifax for the last few weeks and is in and out of port frequently. 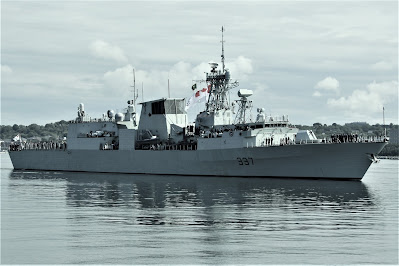 HMCS Fredericton FFH 337 is a Halifax class general purpose / anti-submarine patrol frigate commissioned in 1994. It was built by Saint John Shipbuilding in Saint John, NB. The ship has served in a variety of missions including a six-month NATO deployment ending in late 2021.

And now for something completely different - yes the Royal Navy really does have an icebreaker. Used principally in the antarctic regions for hydrographic charting and various kinds of research, the ship is also a highly capable icebreaker and patrol vessel. HMS Protector A173 is taking a special route home this year. In early June it participated in the resumed Fleet Week in New York, followed by calls in Montreal and Quebec City. It then visited Sydney, NS where it was hosted by the Canadian Coast Guard College. Several Protector crew trained with the CCG in the Canadian arctic in 2020 and 2021.

The ship arrived in Halifax this morning, June 28, and tied up at Navy jetty Bravo 3. 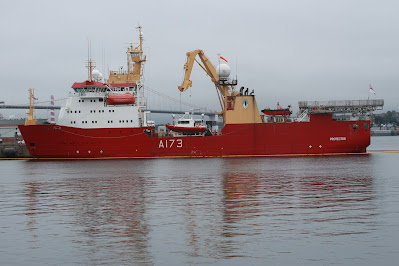 The ship started life in 2000 as the Norwegian privately owned antarctic class icebreaker Polarbjørn, with a hull built by Western Shiprepair Yard in Klaipeda, Lithuania and outfitted by Havyard in Leirvik, Norway. Original owners were G.C. Rieber (once well known in Halifax from their fleet of sealer / researchers), who used the ship for expeditions and subsea work. In 2011 the Royal Navy chartered the ship and commissioned it as HMS Protector. In 2013 they purchased the ship outright.

HMS Protector is outfitted with huge array of equipment including a 50 tonne crane, a 25 tonne A-frame gantry and several small craft. In addition to survey and research work it has also carried out supply and rescue missions and humanitarian work.

The ship's Commanding Officer is Capt. Maryla (Milly) Ingham, the highest ranking female RN naval officer to command a ship. Capt. Ingham has commanded several ships in her RN career, but has reached the rank required for command of a large ship.