Container ships can be loaded to capacity either by volume or by weight. In the former, they load the maxiumum number of containers that the hold and deck have space for, while preserving visibility lines. In the latter they have loaded the maximum tonnage, even if there is space for more containers. Obviously the profitability of a given voyage depends on balancing the two, since empty containers don't pay.

This morning, June 29 both the departure and the arrival appeared to be well down on their draft marks, but possibly more room for containers.

ZIN Qingdao sailed from PSA Halifax Atlantic Hub for New York on the ZCA service from the Mediterranean. 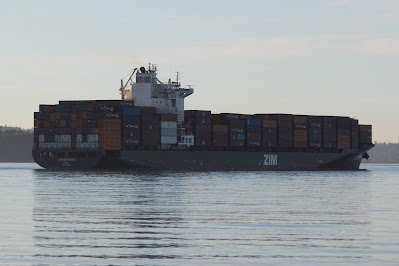 The inbound ship, which was to take its place at Pier 42, was very neatly levelled off on deck, but with stacks only four boxes high.

MSC Cancun dates from 2009 when it was built by Hanjin Heavy Industry + Construction Co Ltd at Subic Bay, Philippines. The 41,322 gt, 52,316 dwt ship has a capacity of 4360 TEU including 326 reefers. It is on the Turkey, Greece to North America route, with a stop at MSC's feeder port of Sines, Portugal. The ship could have been topped off at the last port to maximize loading.

I can explain the significance of the latter name. One time investor / owners Mangrove Partners (MP), based in New York, named their seven ships after New England Patriots football players, one of whom was Troy Brown. Aside from the unusual names, Mangrove Partners ships also acquired notoriety because of the profit they turned when sold. Bought for $62 mn during the depressed market of 2017-18, six of the ships were sold for $368 mn in the 2021 high-demand post COVID era. MP The Brown was not included in that deal, but likely sold at a handsome profit too, as they were all sold to MSC.