Pier 9C crowd and another MSC

Pier 9 was busy once again today with two ships unloading. The autocarier Carmen discharged a variety of machinery and the heavy lifter River Mas has mystery cargo.[I will amend this when more is known].

Classed as a Large Car and Truck Carrier (LCTC), the Carmen was built in 2011 by Daewoo Shipbuilding + Marine Engineering, Okpo with measurements of 74,258 gt, 31,143 dwt and capacity of 7934 CEU. Its 320 tonne capacity stern ramp can handle very large pieces of RoRo, but today's appeared to be mostly JCB backhoes and road construction machinery.

Yellow JCBs contrast with the vivid Wallenius Wilhelmsen colours. (The grey objects are tunneling sections that arrive on ACL ships and are loaded onto rail cars for Alberta where they will be used to extend the Trans Mountain pipeline - they did not arrive on this ship.)

Once the Carmen had finished work at Pier 9C it moved to Autoport to offload automobiles. Autocarriers in the Narrows are always an imposing sight. 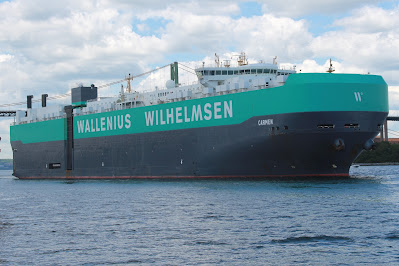 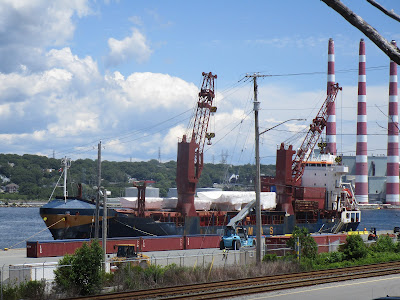 On deck it has what appear to be shrink-wrapped boats, but some of the shapes are quite odd.

With significant amounts of break bulk cargo now diverted to Pier 9C from the Pier 30-31 area to make way for expansion of the southend container terminal the Halifax Port Authority has issued a "Request for Expressions of Interest" for an operator for the Pier 9B and 9C portion of the area known as Richmond Terminals. This would include the Pier 9B transit shed. The ad for the operator implies that the "single terminal operator" will, over time, "transition" all the port's non-container cargo to that area.

As of now there is still significant break bulk cargo activity at Pier 27-28 where imported steel rail for CN is stored, and nickel sulfides from Cuba are transhipped to rail cars. If all that activity will be moved to Richmond Terminals, Pier 9B and 9C will become a very busy place. 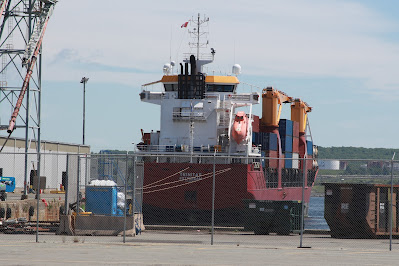 Yesterday (June 29), Nirint Shipping's Trinitas unloaded nickel sulfides at Pier 27, at least some directly to rail cars. Some may also be stored under cover in the transit shed.

The Port's 50 year plan has both the cambers between the finger piers filled in for container terminal expansion. That would possibly see removal of the Pier 26 shed (in the background above) and certainly the grain load out gallery (to the left of this picture).

Speaking of the Southend Terminal, now known as PSA Halifax Atlantic Hub, the stream of MSC arrivals continues unabated. Today it was another first time caller, MSC Julie on MSC's Indus 2 service from North India via the Mediterranean.

The ship also stops in Barcelona and Valencia, Spain and Sines, Portugal en route from Suez, so can pick up European cargoes en route, supplementing MSC's other services from the region.