THE Alliance for the Atlantic Hub

With Halifax's two container terminals under the common management of PSA, ships are docking at whichever terminal can handle them best. The Fairview Cove terminal is limited to ships that have air draft less than about 46 meters (plus 1.35m air gap clearance). Recently also the Fairview facility has been congested and reached its limit for landed containers. On June 14 the ACL ship Atlantic Sea was diverted to the Southend terminal for this reason. The latter terminal has no air draft or water draft restrictions and can handle the largest container ships currently calling on the east coast of North America.

That congestion has apparently been eased with additional trains running to points west. This morning, June 25, the Atlantic Sky sailed from an overnight call at Fairview Cove.

As it was passing the southend terminal outbound for Hamburg, it passed the next inbound, which was a ship on THE Alliance's EC5 service.   Ships on this route have normally called at Fairview Cove, but this one docked at the Southend terminal - the PSA Atlantic Hub.. 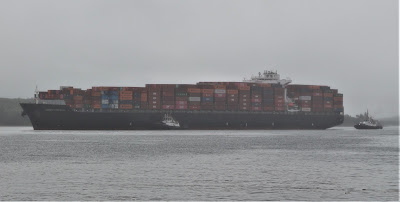 Once it was secured at berth #41the MSC Hong Kong sailed from berth #42. 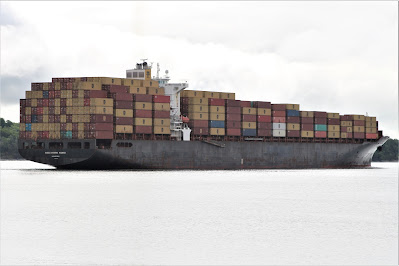 Although it has only recently begun to call here on MSC's CANEX1 service from the Mediterranean to Montreal, the ship used to call here under a previous name. Built in 2002 by Hyundai, Ulsan, the 53,453 gt, 66, 686 dwt ship, with a capacity of 4839 TEU, was originally named ZIM New York. It carried the name China Sea from 2004 to 2006 and then reverted to ZIM New York. During that period it called in Halifax on ZIM's ZCA service. In 2021 Costamare sold the ship, and it its now under the direct management and operation of MSC as MSC Hong Kong.

Its call in Halifax was to top up its containers to ocean going draft. It is now headed for Naples.