Halifax Shipyard - roll out and hand out -corrected

The first super block for the fourth Arctic Patrol Vessel AOPS 4 (to be named William Hall AOPV 433) was rolled out on the hardstand at Halifax Shipyard this afternoon June 10.

The block was positioned adjacent to the Max Bernays, AOP3 (which is in the water), using a whole series of Fagioli Self-propelled Modular Transporters (SPMTs) 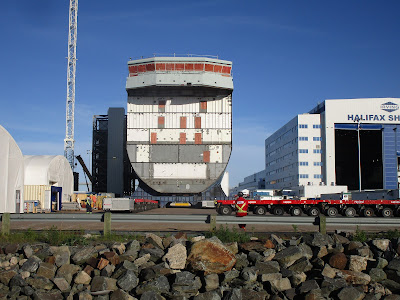 The next block appears to be ready to rollout too, so I will have to check up on this tomorrow. (The Max Bernays is due to shift at the dock tomorrow too, in an unrelated move, but leading up to sea trials.) 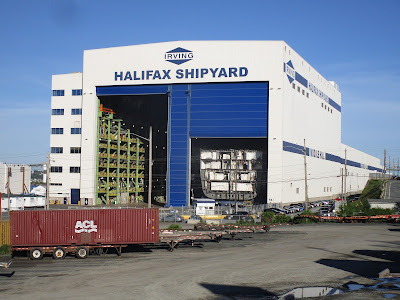 Meanwhile, there are press reports that Irving Shipbuilding will require additional investment in the Halifax Shipyard's facilities in order to complete the new RCN frigates. Those frigates keep growing - if not in dimension, certainly in displacement, and are nearing 9,000 tonnes -  and will be too large to launch on the rented semi-submersible barge Boa Barge 37 which is used to launch the AOP ships. In addition, the current graving dock, which is barely adequate for the current Halifax class frigates will be too small for the new frigates. 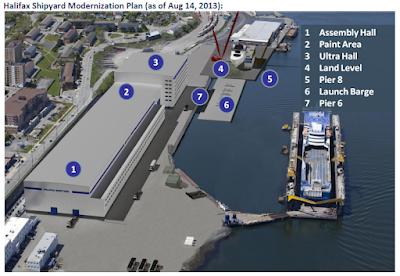 The 2013 concept drawing of the Halifax Shipyard modernisation showed a launch barge at Pier 6, but this will be inadequate for the new frigates. It also still had the Novadock, the (old) Panamax size floating drydock, available. The graving dock is out of sight, off the bottom left hand corner of the drawing.

At the very least the yard would need the services of a large semi-submersible ship, but would be better off with a new floating drydock or a synchrolift (elevating platform).  This would be a major investment, but there is precedent for government funding for such a facility. The last floating drydock at the yard, the Novadock, was financed and owned by the Provincial government. (It mysteriously ended up owned by the Shipyard before it sank and was sold.)

It is interesting that several of the major graving docks in Canada are owned by the federal government (or crown corporations) and are used by shipyards. These include:

- the Port Weller drydock in St.Catharines, ON, now leased by Heddle Marine, but owned by the St.Lawrence Seaway Management Corp,

- Esquimalt Drydock Victoria, BC used by Seaspan and others.

These docks are considered strategic assets, which justifies government ownership.

The Royal Canadian Navy has a synchrolift at HMC Dockyard (which is being upgraded for the new ships) but it is also needed for submarines and routine maintenance of other ships. The shipyard then needs an equivalant for launches and / or major repairs, and a new or enlarged graving dock for long term refits. When Halifax Shipyard was still in the commercial ship repair business, it had two floating drydocks. Both were lost by "misadventure", some would say, and have not been missed until now.

The current graving dock is the original facility of the Halifax Graving Dock Co and is ancient of days. Built in 1889 it was once the largest such dock on the eastern seaboard of North America, and was used to drydock US naval verssels that were too large for facilities in the US. Aside from a new gate the dock is hardly changed from when it was built. 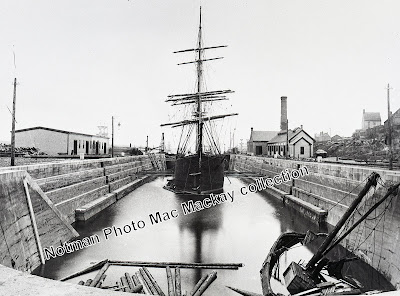 It is also awkward of access and cannot be lengthened southward to any great extent. A weather tight enclosure would also be useful, as ships being refitted now are cocooned while in the graving dock. 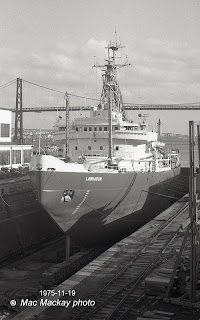 The navy's last icebreaker, and later a Coast Guard ship, the Labrador, was a good fit in the graving dock, but even so left little room to work alongside. The original granite block walls still define the three sides of the dock.