I have been spending a lot of time on posts in the last few days, so I am abbreviating this one somewhat so that I can get on with other things [i.e. I do have a life.] 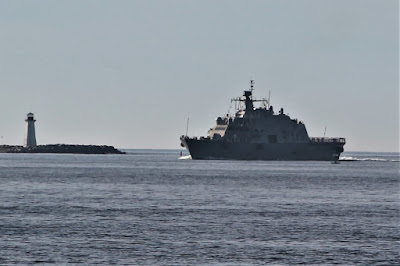 This morning's arrival was USS Minneapolis-Saint Paul LCS 21, the latest in the ill-starred series of Littoral Combat Ships built by Fincantieri's Marinette Marine in Marinette, Wisconsin. The ship's delivery was delayed by a year in order to correct a propulsion system problem. It was commissioned May 21 in Duluth, MN - as close as they could get to its namesake twin cities - and made its way down through the Lakes and St.Lawrence Seaway with a few stops on the way including Quebec City. 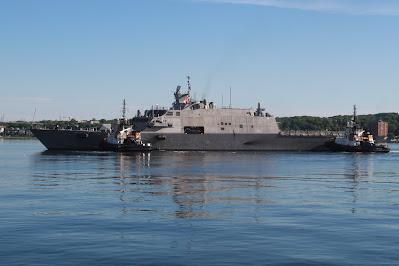 The ship will spend the weekend at HMC Dockyard before heading off to its new homebase of Naval Station Mayport, FL.

Ships of this Freedom class have had numerous performance issues of the ships themselves, and the towed array sonar that they were supposed to tow. Now the Anti-Submarine Warfare (ASW) role has been assigned to another class of ships. The nine Freedom class ships currently in service are scheduled to be decommissioned next year. The oldest one is barely ten years old. Most of those ships called in Halifax on their delivery trips from the Lakes.

Another one of those carefully orchestrated "meets" between arriving and departing ships took place this afternoon as the outbound auto carrier Don Carlos [see yesterday's post] encountered the inbound Atlantic Sky. 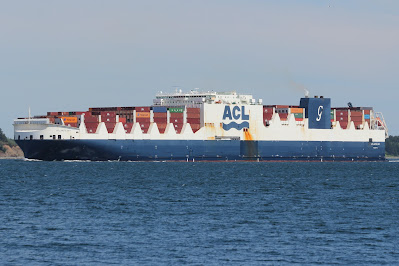 The Atlantic Sky was showing some large rust streaks, evidence of the hard service these ships maintain on the North Atlantic.

Reports that the Fairview Cove terminal is stuffed full of containers, and that there are long lines of rail cars with ACL and other containers waiting to leave Halifax has apparenely caused a backlog of ships, with Atlantic Sky forced to wait off Halifax for a time, along with NYK Rigel.

PSA Halifax's Atlantic Hub terminal in the southend is also filling up, however it has more overflow space, particularly for RoRo trailers in the Pier 29 area. Its arrival today was on the Maersk and CMA CGM's CAE / St-Laurent 1 service, arriving from Montreal.

Three older Maersk ships have recently been replaced on the service by two newer Maersks - Maersk Vayenga [see June 6 ] and Maersk Vistula and one newer CMA CGM ship CMA CGM Montreal [see June 1 ] . The question remained about the fourth ship, and that may have been answered today with arrival of the EM Kea, the ship that has been on the run for some time, but is newer (although 2007 is not exactly new.) 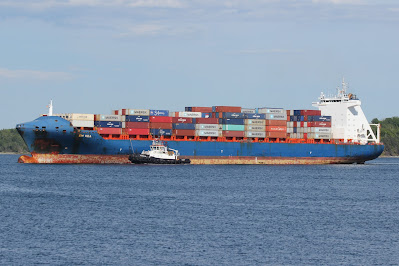 The stylish EM Kea appeared to be at quite a light draft as it made its way inbound today, even though it seemed to have a large deckload. It will take on some more cargo here before heading for Europe.