This a grab bag about today's harbour arrivals (June 30).

A sleek yacht named New Secret arrived at the C.O.V.E dock. The 74m / 243' long vessel, built in 2019 by Amels, Vlissingen has the customary (for superyachts) steel hull and aluminum superstructure and measures 1790 gt. 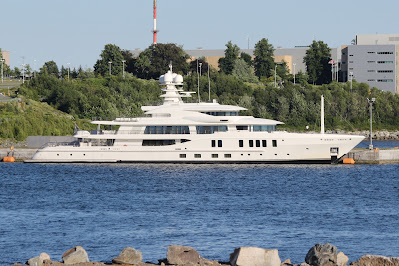 The ship has just completed a month long trip to the Great Lakes. It was reported upbound in the St.Lawrence Seaway May 25, bound for Chicago, and downbound again June 25. According to a Wikipedia entry the New Secret is owned by the Lopes family of Sao Paulo, Brazil.

For most of this month there has been a yacht in port called Majestic, but it was previously called Secret. Whether there is any connection to either of the others is unknown to me. 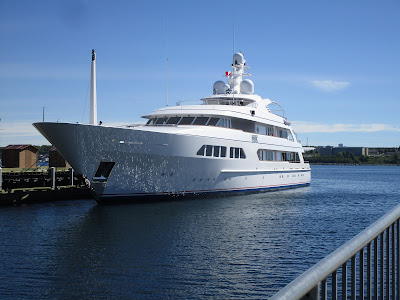 Anchoring in the lower harbour today was the vessel Endeavour. . 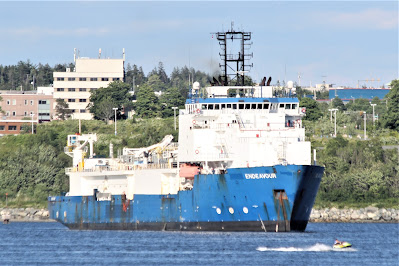 The ship was built in 1999 by Van der Giessen-de-Noord, Krimpen a/d Ijssel. Originally named Bold Endeavour it was converted in 2004 from a cable ship to a diving support vessel. In 2007 it was renamed Deep Endeavour, then in 2020 simply Endeavour.

Now the ship is operated by the Transoceanic Cable Ship Co LLC, so presumably it still does cable work, likely with an ROV. It appears to have cable stowage racks on its upper deck, but they appear to be empty. 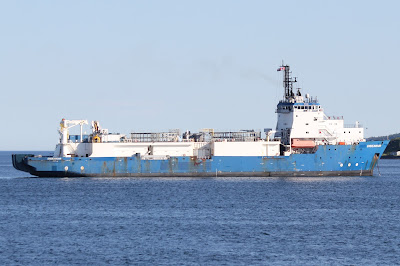 The ship was in the Gulf of Mexico in May, then in Freeport, Bahamas and most recently in Baltimore. The latter port is a well known base for cable ships. When it sailed this evening it headed back in a southwesterly direction, giving Portsmouth, NH as its destinaiton.

The submarine cable manufacturer, Simplex Technolgies Inc (a subsidiary of Tyco International Ltd), has its factory in Newington, NH, a suburb of Portsmouth. So the Endeavour is likely to fill up those racks with new marine grade fibreoptic cable.