There was welcome RoRo action in Halifax today June 29 and more work for the Canadian Food Inspection Agency.

The autocarrier Elektra actually arrived early yesterday at Autoport and spent two days alongside. This is very unusual as most of these ships are in port for only one working day.

Originally a Wallenius Line ship, it was painted in the traditional Wallenius green and white colours.

Wallenius and Wilhelmsen worked together retaining their individual identities (green for Wallenius, red/orange for Wilhelmsen), but eventually merged the operation of their two lines, and have repainted the ships in a new common colour scheme. 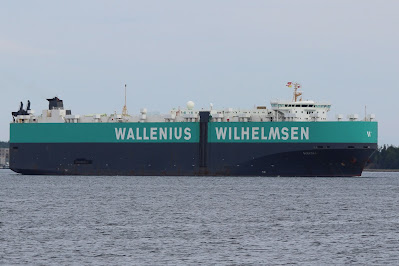 As the ship sailed this afternoon its berth at Autoport was not vacant for long as the ConRo ship Oceanex Sanderling moved over from Pier 41 to load new cars for Newfoundland. 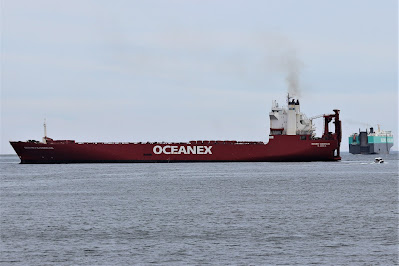 The Oceanex Sanderling arrived this morning after a six month absence from the Halifax - St.John's weekly service. The ship was subject of a major refit and classification renewal survey at the Damen shipyard in Amsterdam since December 2021. It only just returned to St.John's June 27.

During that six months Oceanex alternated its other two ships, which normally run between Montreal and St.John's, with calls in Halifax. That meant that there was only one weekly call in Montreal and RoRo cargo could only be handled every two weeks at Halifax and Montreal. Some RoRo cargo was handled as LoLo, but there was still a backlog.

It is certainly a tribute to the Oceanex Sanderling that it has stood up to such rigorous use on that service since 1987. Built in 1977 by Sasebo Heavy Industries in Sasebo, Japan, the ship's current measurements are 21,849 gt, 15,195 dwt, with a capacity of 1,125 TEU (I assume that includes trailers, because other sources say 522 TEU). One unusual, but important feature is the 157 tonne capacity slewing stern ramp that can swivel to port or starboard. 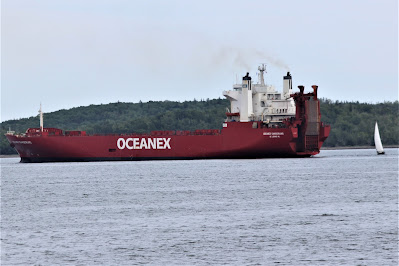 It is certainly a senior citizen among cargo ships, but it is of such an unusual type and size, that it would be very costly to replace and is apparently worth the extensive refit to keep it in class for another five years. Oceanex must be planning a replacement, but no word has leaked out to my ears.

The Canadian Food Inspection Agency continues to examine ships that have been in Asian waters to ensure that they do not carry the larva of the invasive species LDA moth. Ships are checked out at anchor in Halifax before they sail for the St.Lawrence River and the Great Lakes, where the moth pose the greatest risk to coniferous forests. Today's candidate for inpsection is the Nomadic Milde a Marshall Islands flag vessel operated by New Nomadic Short Sea Shipping of Norway.("Milde" is a district in the company's hometown of Bergen.) 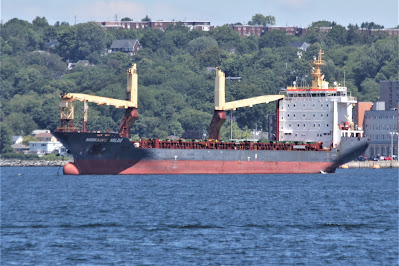 The ship is now due to sail at 2230 hrs tonight, which is a considerably longer stay in port than the usual CFIA inspection stop. It may therefore have been doing some work or taking stores. It certainly appears to be high in the water, so is likely destined for a loading port.