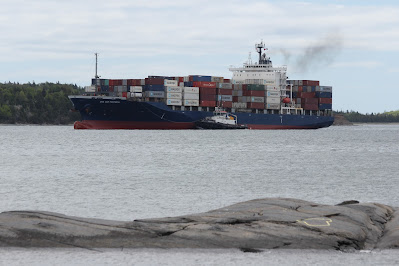 The ship greeted Halifax with a big "burp" of black smoke as it approached PSA Halifax Atlantic Hub.

The ship was greeted with much hype when it arrived in Montreal on May 25. It was then noted that it has "better fuel efficiency" , provides "extra capacity", etc., I wonder how a 15 year old ship that is smaller than the usual ships on the route can live up to that - and who will keep score.

The ship is actually owned by CMA CGM SA The French Line, but is managed by Bernhard Schulte Shipmanagement, and flies the flag of Malta. 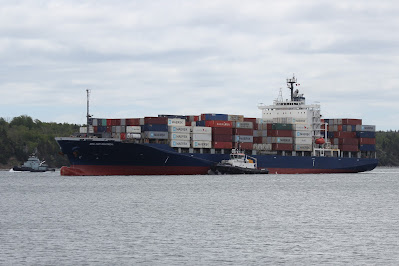 A quick look at the ship's deck load showed one lonely CMA CGM box peaking out of one stack, but lots of Maersk and Hamburg-Sud (owned by Maersk) boxes amidst the "no-names" and rentals. The ship also showed lots of freshly painted boot topping, suggesting a light load due to the imbalance of eastbound North Atlantic cargo, and St.Lawrence River draft restrictions. Five high stacks therefore suggest lots of empties.

(In the photo above the navy tug Glenevis is scooting past on its way inbound to HMC Dockayrd, and was not involved in the arrival of this ship.) 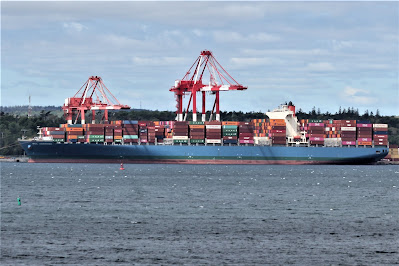 Ships of THE Alliance have traditionally called at Fairview Cove,  but now that PSA operates both container terminals in Halifax, the larger ships will be worked at the Atlantic Hub southend terminal. It is also expected that lines using smaller ships will eventually move to Fairview Cove.