In  what has been described as a "Sputnik moment: an autonomous ship has finally made it across the Atlantic - even though the last leg was in tow. The Mayflower 400 (Mayflower Autonomous Ship = MAS 400) arrived in Halifax today, June 5. 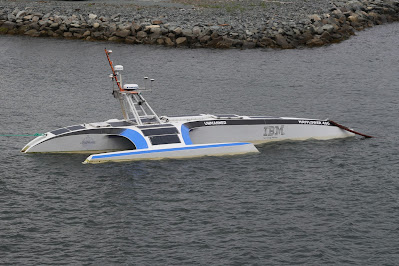 The 15m x 6m trimaran was to make its crossing in 2020, in commemoration of the Mayflower of 1620 carrying 102 passengers and about 30 crew from Plymouth, England to Plymouth, MA. Unlike that 10 week voyage, this was to be completely autonomous, using software instead of crew. The planned 2020 trip was cancelled due to COVID. A 2021 try was scrubbed after 3 days due to mechanical glitches.

The 2022 trip started in Plymouth, England on April 27, but the boat had to put into Horta, Azores for technical adjustments. It departed there on May 20, but on May 28-29 there was a problem with a charger and it was decided to hdivert to Halifax using back-up systems.

Dominion Diving sent their Dominion Victory to fetch the craft, and towed it in to Dartmouth Cove arriving this morning. 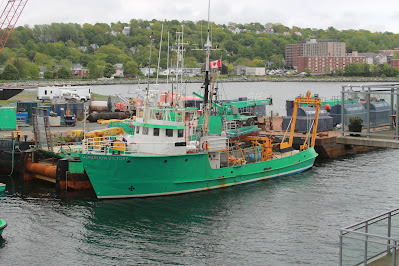 The Mayflower 400 is powered by electricity, generated by a diesel engine, or collected by solar panels and stored in batteries. It also has "edge devices" that generate enough power to run the onboard computers. The cutting edge software is in fact the "captain" and makes navigation decisions and directs the vessel without intervention or remote control from shore. 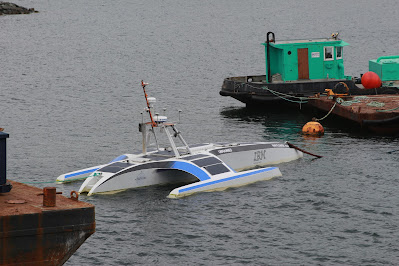 The boat is also equipped with cameras and communication devices. Aside from testing autonomous operation it is also fitted out for research. It carries 700 kg of scientific equipment and can take water samples for onboard analyis and store them for delivery to shoreside labs. The long duration voyages without the cost of crew will permit a greater breadth of research that has been possible.

Its non-profit operators ProMare have partnered with IBM and other tech companies to develop the operating systems, and they maintain an interesting website:  https://mas400.com/

In viewof the numerous spectacular failures in the early days of rocket and satellite science, this trip has probably moved the Autonomous Ship sector well ahead. There are several other full size autonomous ships now operating or planned. They often have small tech crew or require direction from shore, so the Mayflower 400 is certainly a breakthrough even though its sucess may be limited for now.