As per previous posts, Maersk Lines and CMA CGM are replacing the ships on their joint CAE / St-Laurent I service. The first of the replacements, CMA CGM Montreal arrived from Montreal June 1  . The second ship, Maersk Vayenga arrived today. 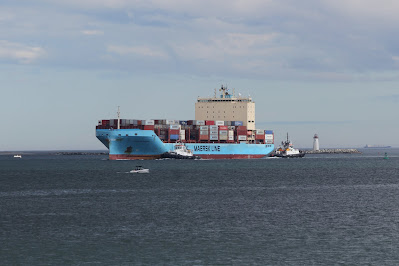 As Maersk Vayenga makes up its tugs off Maugher's Beach the bulker Eagle is visible in the outer anchorages. It is due tomorrow for CFIA inspection.

The Vayenga Maersk was built by the COSCO (Zhoushan) Shipyard Co in 2018 and is a 34,882 gt, 39,938 dwt ship with a capacity of 3600 TEU (3596 by some sources) and 600 reefer plugs. It does not appear fully loaded, so will likely take advantage of its Halifax call to not only pick up regional cargo, but to top up to sea going draft before departing for Bremerhaven.* 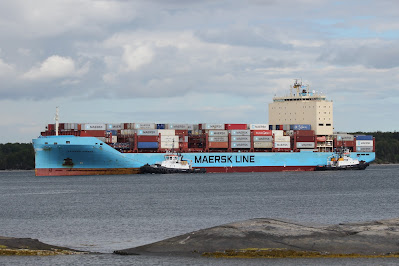 A sister ship Vistula Maersk is due to depart Antwerp today for Montreal. It will call in Halifax next week.

The ships are part of a seven ships built to order for Maersk, to serve as year round feeder ships in the North Sea and Baltic. They are built to Ice Class 1A and feature a "bulbless" bow, full width enclosed bridge and covered forecastle mooring deck. When built they were the largest Ice Class 1A container ships. They were also built to use MDO or biofuel, thus meeting environmental regulations without the need for exhaust gas scrubbers. One of the ships of the class, Venta Maersk, was the first container ship to take the northeast passage (or Northern Sea Route) from Asia to Europe (with icebreaker assistance) in 2018.

With suspension of its service from Rotterdam to Russia Maersk is able to spare two ships for the year round St.Lawrence service, which could experience similar conditions to the Baltic.

The ship gave Anterp as its destination. Whether this is a change in the order of rotation of ports remains to be seen. Until now ships on this run have always sailed for Bremerhaven.