Container traffic was only part of the activity in Halifax harbour today, June 23. The long awaited (and waiting) Vistula Maersk arrived on the joint Maersk and CMA/CGM St.Lawrence River service. This is the ship's first trip after replacing older Maersk ships. 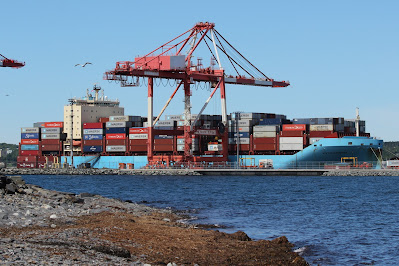 Built in 2018 by COSCO (Zhoushan) Shipyard Co, it was the first of a series of ice class ships built as Baltic feeders. The 34,882 gt, 40,000 dwt ship has a capacity of 3600 TEU including 600 reefers. It has also been joined on the St.Lawrence run by sister ship Vayenga Maersk. Both ships became available when Baltic trade patterns changed after sanctions were imposed on Russia.

It arrived off Halifax from Montreal on June 20 and has been waiting at anchor until space was available at PSA Halifax Atlantic Hub (Southend terminal). It will top up its cargo here and depart for Europe late tonight.

Also at the Southend terminal is the Navarino on MSC's Indus 2 service from North India via Suez. 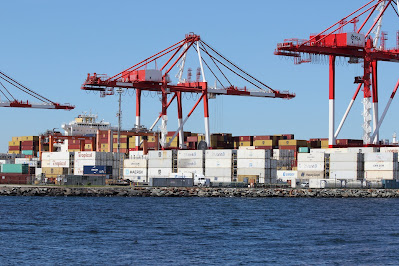 Navarino dates from 2010 when it was built by Hudong-Zhongua, Shanghai as MSC Navarino. It was renamed Carmen shortly after, then in 2011 became Hyundai Navarino. It reverted to Navarino in 2012. Owners Costamare provides ships to major container lines for varying charter durations, often renaming them to suit.The 91,354 gt, 102,302 dwt ship has a capacity of 8530 TEU.

PSA also had the Oceanex Connaigra at Pier 36 for RoRo trailers and cars (generally used ones and fleet cars). The ship shifted to Autoport for more cars (new ones) then was due to move to anchor over night. It will load containers tomorrow and depart for St.John's.

This is supposed to be the ship's last call in Halifax as fleet mate Oceanex Sanderling is now due back from refit in Amsterdam before month's end, resuming duties from St.John's June 27 and Halifax June 30. Oceanex Connaigra and Oceanex Avalon have been alternating a weekly Montreal and Halifax service to St.John's since January when Oceanex Sanderling went off to the Damen shipyard in Waalhaven. That has meant only alternate week RoRo to Newfoundland from each port. Once Oceanex Sanderling is back there will be weekly RoRo service again from Halifax and Montreal.(The Con Ro Oceanex Connaigra and the non-RoRo Oceanex Avalon will each resume weekly sailings from Montreal). 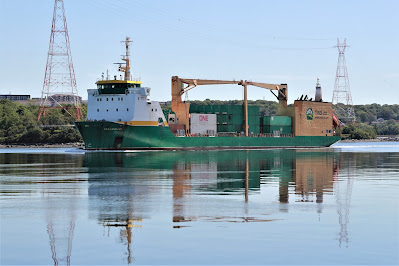 Nolhan Ava cuts through the glassy waters of the Narrows this morning en route to Fairview Cove.

There was news today that the Atlantic Pilotage Authority (APA) has made Belledune, NB, Sheet Harbour, NS and Argentia, NL mandatory pilotage ports. Until now the three had been non-compulsary, meaning that engaging harbour pilots was optional. In the case of Nolhan Ava the cost of pilotage in Argentia may be a severe blow to the operation's bottom line. However the vessel's master may qualify for a pilotage certificate, which would in fact be a waiver from the requirement for an APA pilot.

Later in the day it was NYK Deneb arriving on its regular slot on THE Alliance's AL5 route. 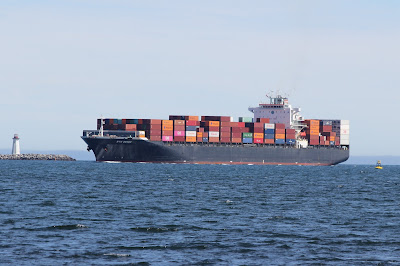 Non-container activity included the quaintly named tanker The Sheriff which anchored for a good part of the day. (It was scheduled to get out of Dodge about mid-afternoon) 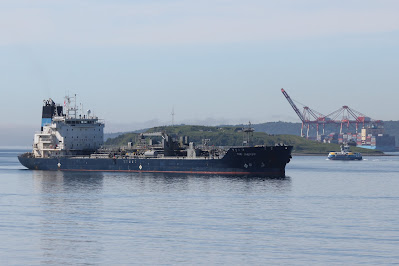 The ship was built by 3 Maj Brodogradiliste, Rijeka, Croatia in 2013 and is a 10,866 gt, 14,936 dwt asphalt  / bitumen carrier. It appeared to be carrying cargo, but since sailing from Langshan, China, and calling in Long Beach, CA (May 31 - June 1), it has transited the Panama Canal (June 12) and has been awaiting orders for a destination. 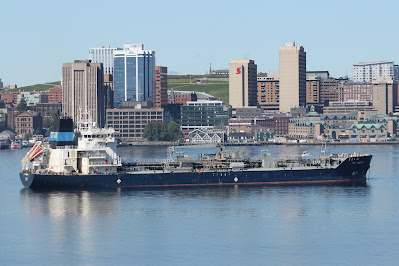 The purpose of its call in Halifax is unknown, but it is likely that it had a CFIA inspection for LDA moth larva. If so that would indicate a possible Canadian destination.

Returning to Halifax from unspecified exercises offshore the Canadian Navy's supply ship Asterix tied up at its usual berth in HMC Dockyard. HMCS Fredericton has been operating off Halifax for the last several days, so it may have been conducting refueling / stores transfer at sea trials. 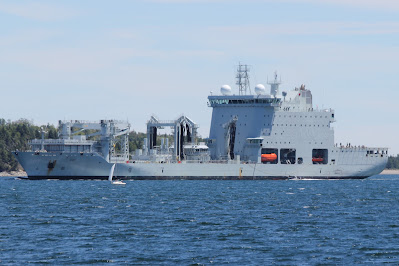 Also on some unspecified activity with the RCN is the offshore tug/supplier Atlantic Osprey which docked at Jetty Alpha, at Shearwater. 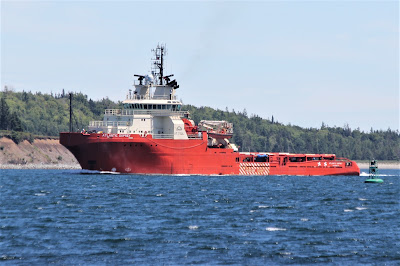 Built by Halifax Shipyard in 2003 the 16,000 hp vessel, like many Canadian offshore support ships, has been idle but is therefore available for other work. Atlantic Osprey was laid up in Stephenville, NL until earlier this month. It departed St.John's five days ago (June 18). 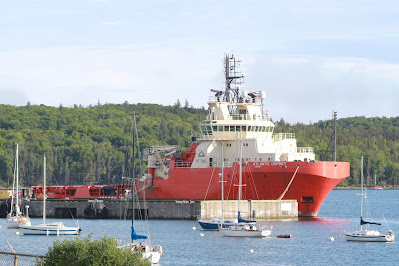 Tied up at Navy Jetty Alpha, the ship overlooks boats of the Shearwater Yacht Club.

Despite concerns about the herring stock and the closure of the herring and mackeral fishery in some areas such as the Bay of Fundy, there are fish off Nova Scotia as the two seiners Lady Melissa and Morning Star are bringing their catches in daily and pumping off into tanker trucks. As soon as they are unloaded the boats head back out to sea. The trucks head for Comeau Seafod's herring processing plants in Saulnierville or East Pubnico, NS. 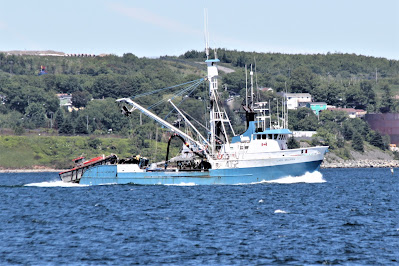 Lady Melissa heads back to sea for more with its skiff perched on the stern ready to deploy the seine net.

At the Cherubini Metal Workers dock in Eisner's Cove, next to Shearwater, the latest bridge for Toronto Harbour has now been loaded aboard the barge Glovertown Spirit. Once fully secured to the barge it will be taken in tow by the tug Beverly M1 for the long trip to Lake Ontario.

(Note the bright sunlight, but band of thick fog in the background.)