Autoport is having a busy June 10 with two ships on the books. First in was the San Martin (see previous post) which sailed late this afternoon, giving a chance to see its starboard side, with ramp, recessed gangway and pilot door. 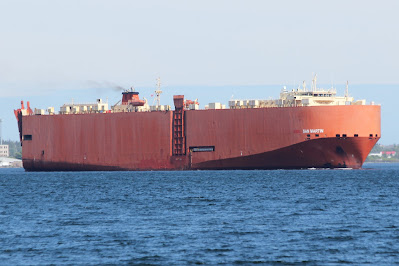 As the San Martin was outbound it met the older but larger Morning Caroline, inbound for Autoport. 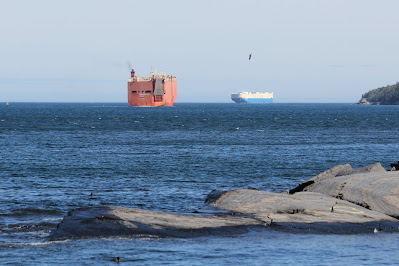 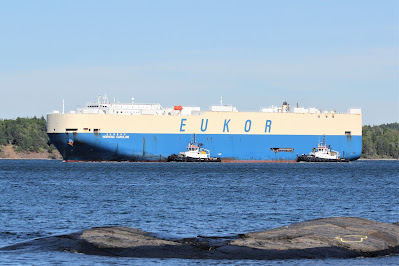 PSA Halifax's Atlantic Hub was also having a busy day with the Oceanex Connaigra loading for Newfoundland on its every-other-week container and RoRo service in the absence of the ASL Sanderling. Until that ship returns from shipyard work in Amsterdam (now scheduled for July) alternate weeks will be served by the Oceanex Avalon which carries containers only and does not have RoRo capability.

When MSC Brianna sailed this morning (see previous post also) its place was soon taken by the MSC Mattina another veteran ship, but a relative newcomer to MSC.

Hyundai Mipo built the ship in 2007 in Ulsan, a 42,484 gt, 53,644 dwt vessel with a capacity of 4363     TEU including 600 reefers. Delivered as ITAL Mattina it was renamed E.R.Nelson immediately to take up a ten year long term charter to Ernst Russ. At the end of that term it was renamed Mattina and became MSC Mattina in 2021. Ownership is too confusing to decode, so I can't tell if it is chartered or owned by MSC.

It is currently operating on MSC's new service from Turkey and Greece to east coast North America. 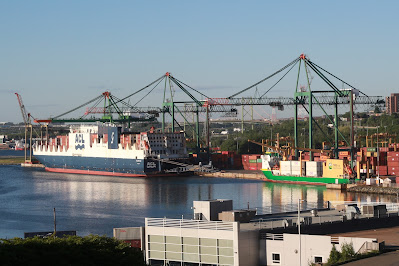 The Nolhan Ava has a fixed stern ramp, and requires the shoreside ramp to handle its RoRo cargo. The ship serves Argentia, NL and St-Pierre et Miquelon, weekly. The stern ramp on Atlantic Sky has a slewing segment at the very end which swivels to reach shore,so can berth at any pier.  However it may need the shore ramp for some very large cargo.