Look What the Fog Dragged In - corrected

Despite the legendary pea soup fog this morning (June 26) five ships arrived in Halifax and four took up positions in the harbour anchorages. As the fog slowly retreated back to sea, the ships were revealed.

First in was the MidRange product tanker Dee4 Dogwood from Amsterdam. 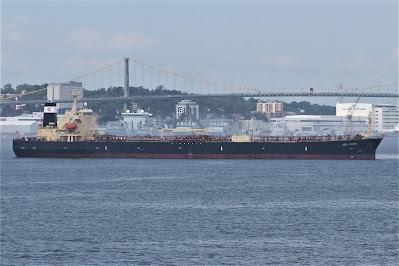 A 26,900 gt, 47,399 dwt vessel, it was built by Onomichi Zosen in Onomichi, Japan in 2008. It started out as Nord Organiser and was renamed in 2020 when it joined the oddly named Dee4 Capital Partners fleet. That fleet currently stands at 12 MR tankers. All the ships have names with the "Dee 4" prefix plus the name of a tree. Several of the ships have called in Halifax in recent times, including this one, which was last here November 21, 2021, and at least once before that. 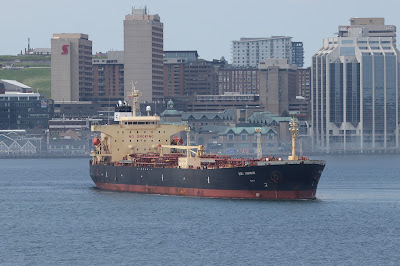 In a repeat of its last visit it is anchored until this evening when Irving Oil's Acadian sails from the berth at the Woodside terminal. 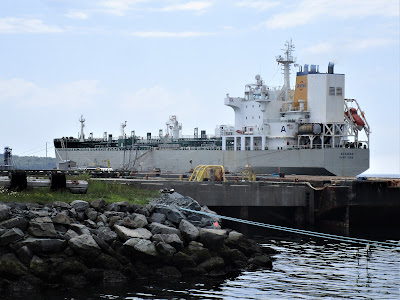 The next arrival was the once familiar offshore supplier Atlantic Condor. Built by Halifax Shipyard in 2010 to support gas installations off Nova Scotia, it was based in Halifax for ten years. When the gas facilities were decommissioned and removed, the ship found work elsewhere and was also laid up in Stephenville, NL for a time. 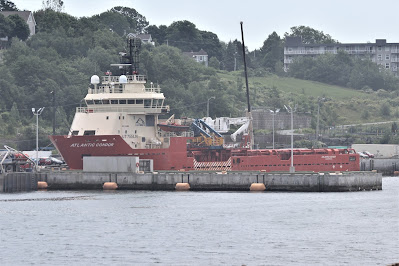 The 2334 gt ship will now be fitted with an array of lab equipment for its next assignment. It will be part of an extensive research program into (yes you guessed it) fog! Funded by the United States Office of Naval Research and working with numerous universities and other groups, the US$7.5 MN program will include documentation from instruments to be installed on Sable Island. The Atlantic Condor will sail to the Grand Banks - thought to be the foggiest place on earth - for other aspects of the work.
(They could have done some research in Halifax this morning.)

The next ship to work its way through fog to anchor was Maritime Jingan another MidRange tanker of 29,211 gt, 44,411 dwt, built in 2003 by Dalian Shipyard Co in Dalian, China. 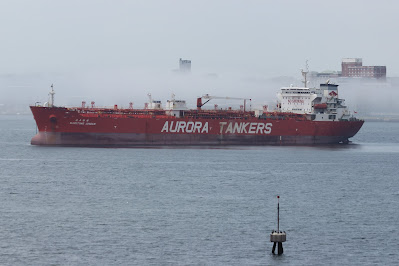 With a solid wall of low level fog in the background, the ship anchored off the Dartmouth shore near the old Shell Oil pylon. Later in the day the ship resumed its voyage from Carteret, NJ to Saint John, NB. 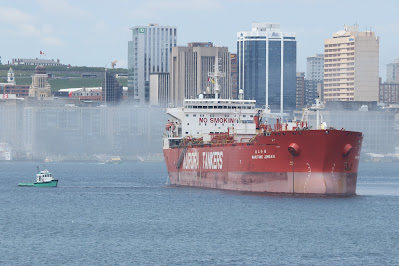 The launch Halmar stands by the ship as the fog lifts to reveal the Halifax shore line.

Another arrival this morning, although I do not know exactly when, was the CCGS Earl Grey which also took up a position in the lower harbour anchorages. It later moved to Bedford Basin. 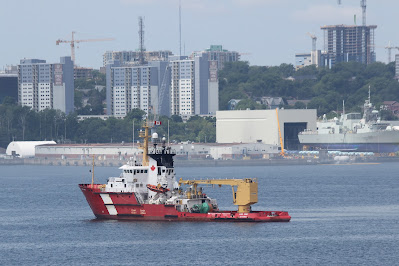 As more of the Halifax shore became visible, HMCS Toronto showed through on the Syncrolift at HMC Dockyard. (Thanks to fog I misread the pennant number - it is HMCS Charlottetown.)

The final arrival of the morning, and the last to become visible as the fog moved out was the large bulker Chow in number one anchorage. 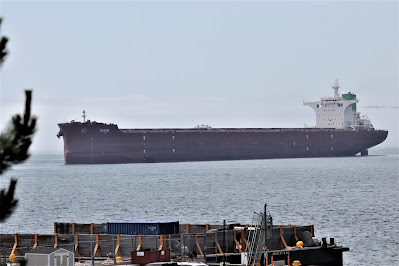 A 94,761 gt, 181,146 dwt ship, it was built in 2016 by the Shanghai Waigaoqiao Shipbuilding Co Ltd in the free trade zone of Shanghai.After launch as Chow it briefly carried the name SBI Estupendo (seems appropriate) before reverting back to Chow later in 2016. 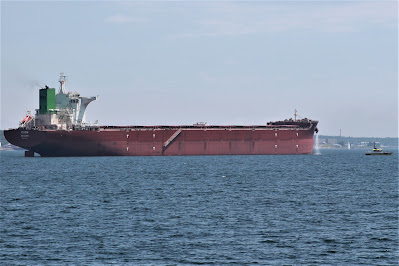 After clearing CFIA inspection the ship sailed later in the day for Sept-Iles, QC where it is due to load 175,000 tonnes of iron ore at the common user dock (in Pointe Noire).

Also due to sail later today for Contrecoeur, Bécancour, QC is the tug Atlantic Elm, towing the barge Atlantic Marlin. The barge will be loaded with cargo for Baker Lake and make the long trip to Hudson's Bay where it will spend the summer lightering cargo from ships to shore.

A late morning departure that I did not attempt to photograph was the X-press Irazu for Melfi Lines. I was at Woodside when the tug left for Pier 41, and the photo explains why I did not make the attempt. 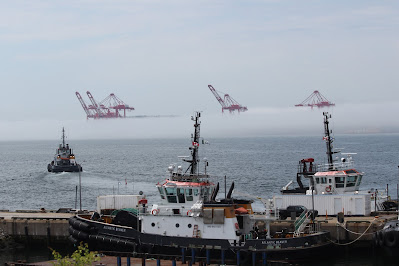 Only the tops of the cranes at PSA Halifax Atlantic Hub (southend terminal) were visible as a band of dense fog clung to the Halifax shore.