Managing the ins and outs of vessel scheduling is an arcane art, mastered by a few people on computers deep in the bowels of shipping company HQs. Unlike truck or airplane scheduling everything about ship scheduling must take place in a sort of slow motion, with planning required weeks or months in advance to ensure that the right ships are in the right places at the right time to maintain schedules, and meet demand. I do not pretend to understand how all this is achieved, which may explain why there were (for me at least) two surprises this morning (June 10.)

The first was what I thought was a routine sailing of the container ship MSC Brianna. A regular caller on the Canada Express 2 service from the Mediterranean, it calls in Halifax to drop off / top off containers while en route to and from Montreal. It was last here May 2, on its westbound leg when I took this picture: 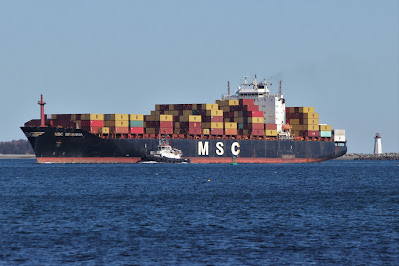 I also covered the ship's lengthy history on April 6, 2021

The ship arrived again yesterday (June 9) on the eastbound leg, which I thought meant that it would be retracing its route to Barcelona, Leghorn, Genoa and Valencia, as per the published schedule. It turns out however that those are indeed ports that the ship will be calling at, but perhaps not right away. 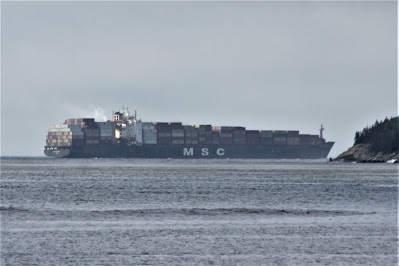 As the ship disappeared from view at my vantage point (swinging a lee to disembark rhe pilot) its AIS indicated that the ship would be heading a bit farther south - for Lomé. Togo, in fact. On entering that port in MSC's interactive schedule, I find that all the eastbound Canada Express 2 ships are shown calling there in between 32 and 37 days from their sailing from Halifax. However Lomé is not shown on MSC's non-interactive schedules, and ships on the CAE2 service have been on an approximately one month rotation, which would not allow such a lengthy diversion.

Lomé is MSC's West African transshipment hub with feeders and other routes fanning out from there. So perhaps the ship will not in fact be going to Lomé, but will be transshipping some cargo in Barcelona for Lomé, but if so why would the ship's destinaiton be given as Lomé on AIS?

I am therefore somewhat mystified by this, but will hope for clarification.

Inbound at the same time was the "odd" auto carrier San Martin. By odd I mean that is not a member of one of the regular fleets such as Wallenius Wilhelmsen, Siem, NYK or MOL. It is also somewhat smaller than the regular callers and is classed as a "Medium" sized Pure Car and Truck Carrier. 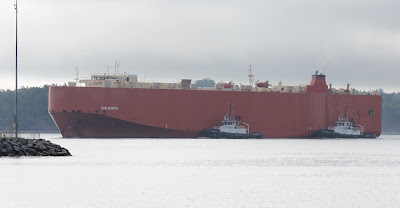 Built in 2009 by 3 Maj Brodogradiliste in Rijeka, Croatia, it measures a modest 40,619 gt, 12,244 dwt and has a capacity of 4870 CEU. Originally called Montreal it was almost immediately renamed STX Oriole, then in 2016 became Gral. San Martin. It was renamed again as recently as April 1 of this year becoming simply San Martin. [ "Gral." is the Spanish abbreviation for General, and General José de San Martin was the liberator of Argentina, Chile and Peru from Spanish rule in the 1820s. Indeed the ship until recently operated to South America where the General is still a national hero.]

The San Martin arrived from Emden, and docked at Autoport, probably to unload Volkswagen products. It is likely that the sinking of the Felicity Ace on March 1 disrupted normal routines and it became necessary to find another ship. The San Martin is operated by NSC Holding of Hamburg, so may even have been contracted directly by VW to supplement the regular transatlantic auto carrier ships.

Perhaps not a major mystery but an interesting break from routine callers nonetheless.