Halifax has now joined many other ports in the world with container ships waiting for berths as the terminals seem to be working full out. It is still nothing like the west coast US ports of Los Angeles / Long Beach or Chinese ports such as Shanghai. But to see ships anchored offshore for days, the terminals stretched for space, and CN putting on extra trains is virtually unheard of here.

PSA Halifax, operators of both container terminals, Southend (Atlantic Gateway) and Fairview Cove have been sharing the load between the two facilities, with big ships docking at the Southend and (relatively) smaller ships at Fairview Cove. 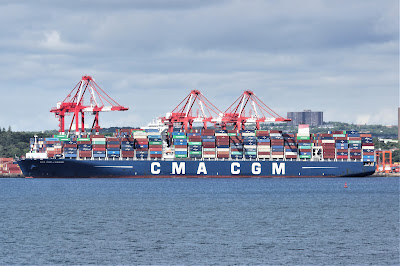 That left berth 42 for the MSC Pratiti  on the Turkey-Greece service. 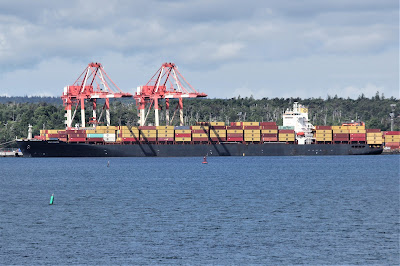 I also noted that the ship was refueling while at Pier 42. This is not something I have seen much of as most container lines arrange bunker stops overseas.

As soon as CMA CGM J.Adams sailed this evening Navarino docked. It is MSC's Indus 2 route from North India. I will cover that ship tomorrow.

Back in 2017 Shipfax speculated that the ZIM Pusan was going for scrap. See February 7, 2017 , but it was apparently saved by the huge upswing in demand for even "uneconomic" sized ships, and MSC's buying spree.

Interestingly another MSC ship on the service from Turkey and Greece, MSC Matilde, which was due yesterday, has opted to bypass Halifax. In fact it just cleared Sines, Portugal June 21 and is giving a June 30 ETA for Freeport, Bahamas.

Heading for Fairview Cove, the MSC Alyssa is on the Canada Express 1 service from the Mediterranean. It will stop over long enough to unload boxes to reduce draft to meet St.Lawrence River restrictions. 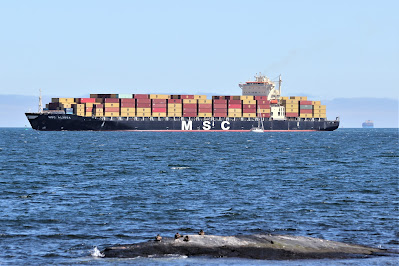 On the way in it passed the Vistula Maersk, also bound for Montreal, which has been anchored offshore since June 20 awating its turn at the Southend.
Built in 2001 by Hyundai, Busan, MSC Alyssa is registered at 43,575 gt, 61,487 dwt with a capacity of 4340 TEU, including 150 reefers. 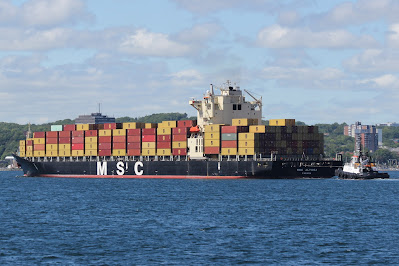 The ship took the tug Atlantic Oak as stern escort, as required by harbour regulations, to make its way through the Narrows to Bedford Basin where it anchored untill its berth was clear.

Fairview Cove was also working the Humen Bridge. It moved out to Basin anchorage in the evening to allow MSC Alyssa alongside. 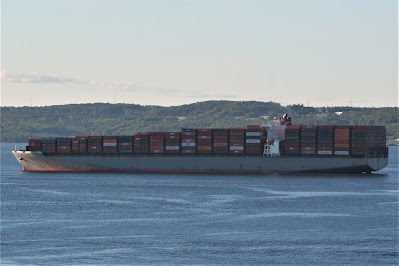 Not to be left out, Autoport has been very busy too, with a great many cars originating from Volkswagen's port of Emden. Today's arrival was a first time caller I believe, SFL Composer. 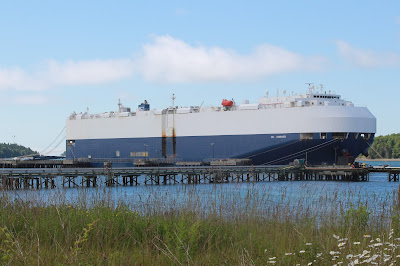 Built in 2005 by Minami Nippon, Shitanoe, the 58,631 gt, 18,881 dwt ship was named Excellent Ace until 2012 then Glovis Composer until 2020. SFL Corp is a NYSE listed ship investment company with ships of all types, including six auto carriers, four of which (including this one) are dedicated to Volkswagen. It has a rated capacity of 6500 CEU. 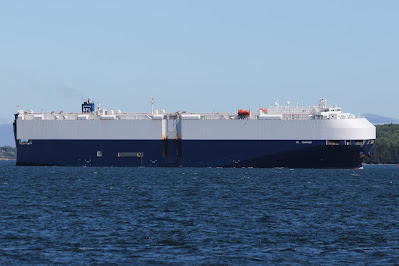 On sailing this afternoon, the ship gave its destination as Davisville, RI. That port has recently expanded its auto piers and will now be able to handle more than its previous totals of 300,000 cars per year. By comparison Autoport in Halifax handles about 185,000 vehicles per year and is the sole new car import facility in eastern Canada.