1984 and Portugal calling [and an update]

Back into the 1984 shoebox. 1984 was the year of the biggest Tall Ship event in Halifax for years. My vantage point off Point Pleasant Park for the Parade of Sail was not the best, and most of the ships were well known anyway. 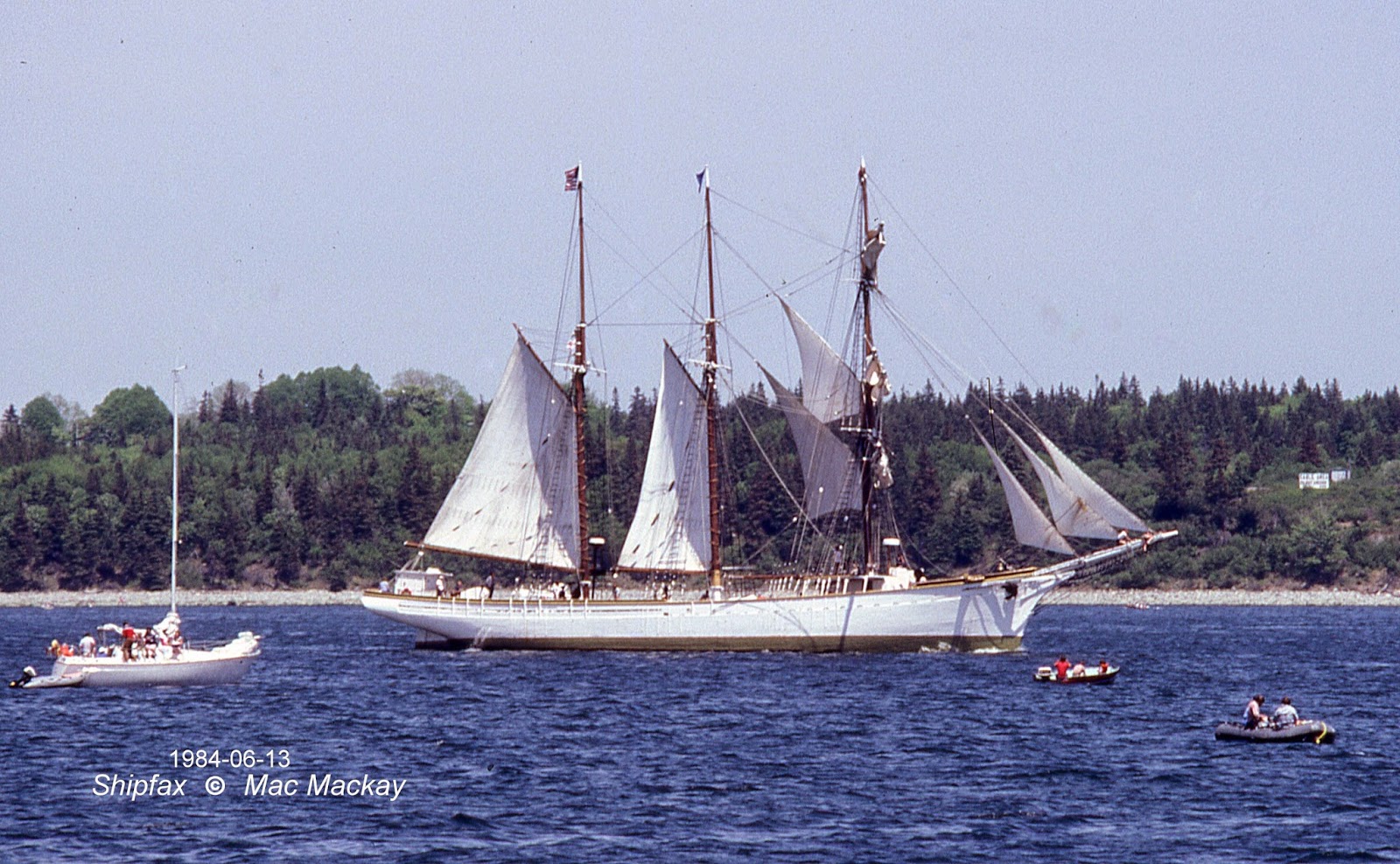 One vessel in particular caught my eye, and I was pleased to catch up with it later in Quebec.
Gazela was built in 1901 as a traditional wooden sailing vessel of the Portuguese Grand Banks White Fleet. Carrying 35 dories, and without an engine until 1938, it fished steadily until 1969. It was purchased by the Philadelphia Maritime Museum and arrived in its new home port in 1971 where it was refurbished and renamed Gazela Primiero. It sails an ambassador the city, the port, and the State of Pennsylvania   In 1985 ownership was transferred to the Philadelphia Ship Preservation Guild, and it was renamed Gazela. 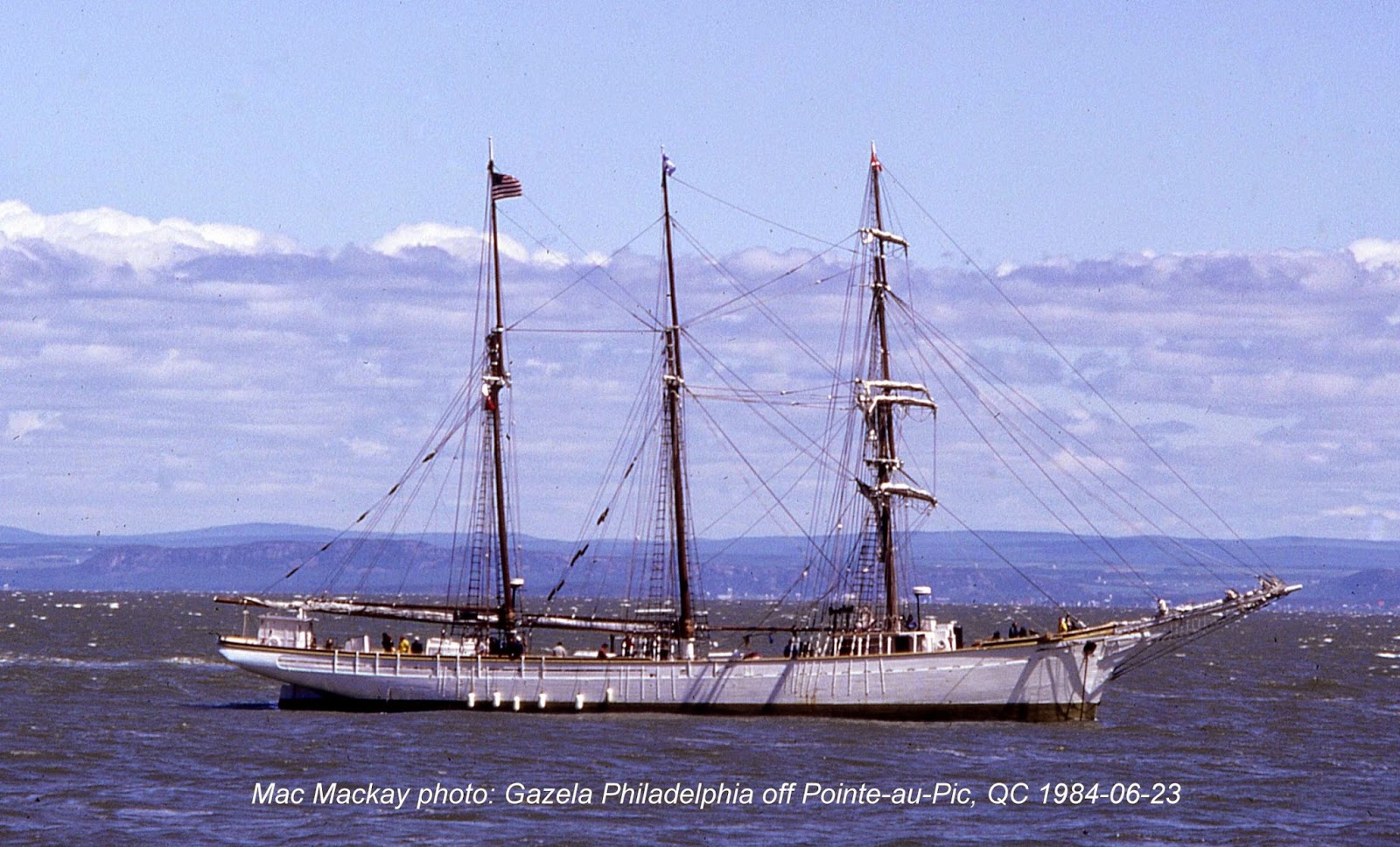 Her long overhanging stern was the result of a new stern post and extension fitted when she was motorized.
The 3 masted barquentine, along with scores of other white painted Portuguese schooners, made St.John's, Newfoundland and North Sydney, their North American base of operation since time immemorial. In fact the Basques and Portuguese were exploiting the Grand Banks fisheries long before John Cabot showed up in 1497.

With ancestral rights of access to the Banks, they continued to fish there after Canada declared its 200 mile economic zone. However continued quota abuse eventually lead to a ban on port calls,. They did shift to St-Pierre for a time, but they have largely vanished from our area due to the depletion of the cod stock, their primary interest in fishing.

They were still calling in St.John's in the late 1970s and early 1980s when I saw them. but there were no schooners left. However many were still fishing with long lines from open boats, and salting their catch aboard in the traditional way. 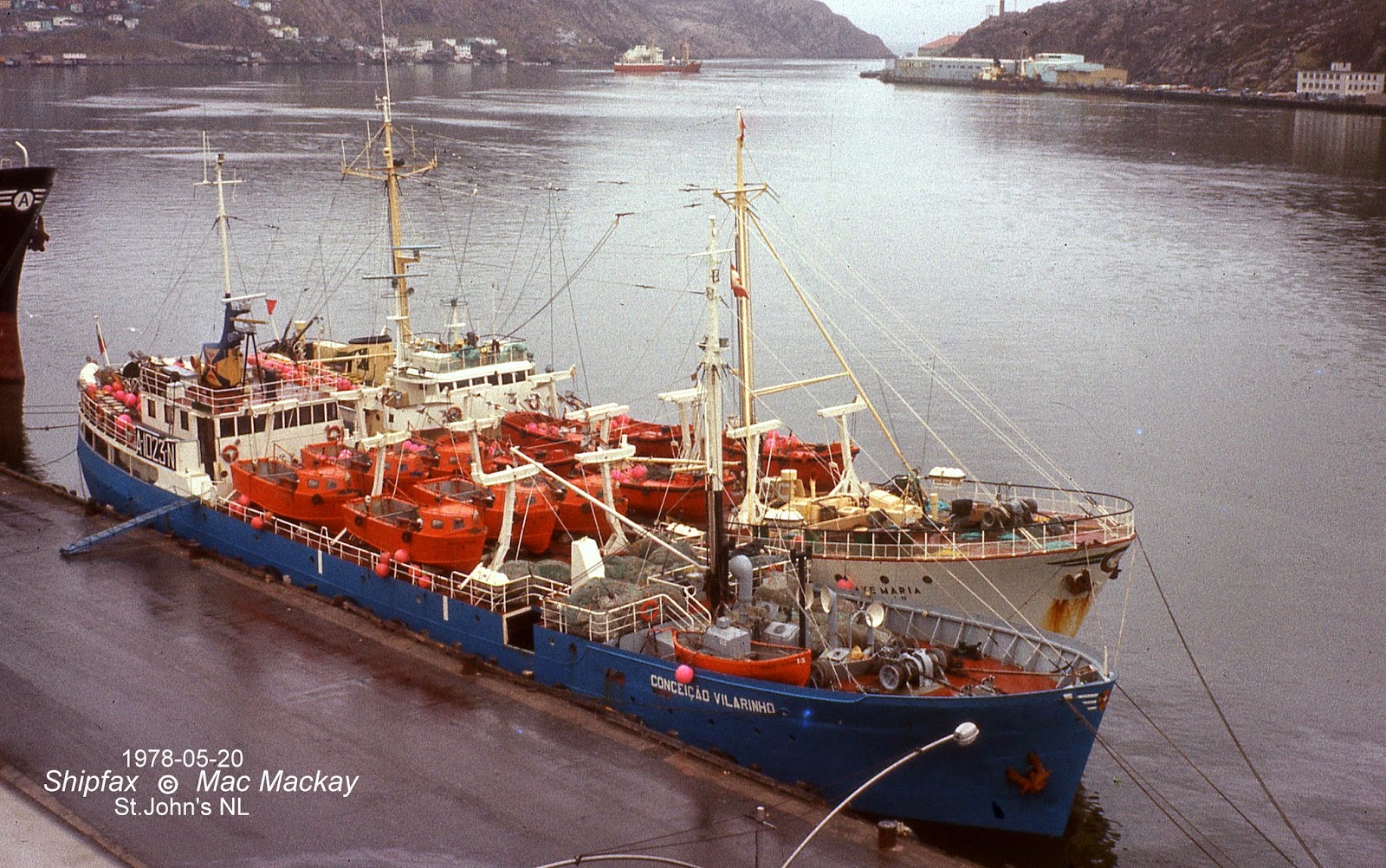 CCGS Barlett sails through the Narrows of St.John's harbour as Portuguese boats Conceiçao Vilarinho and Avè Maria are tied up alongside.

Conceiçao Vilarinho was built in 1947 by Hammarbyverken of Stockholm. Sweden as the cargo ship Elsa Thorden, and in 1948 was renamed Bure. In 1951 it was acquired by Joao Maria Vilarinho Successors Ltda of Aveiro, Portugal and converted for dory fishing and renamed. In this 1978 photo she had been equipped with six motor boats for the line fishermen to set out and retrieve their trawls and land their fish. The ship was deleted by Lloyd's in 2003. 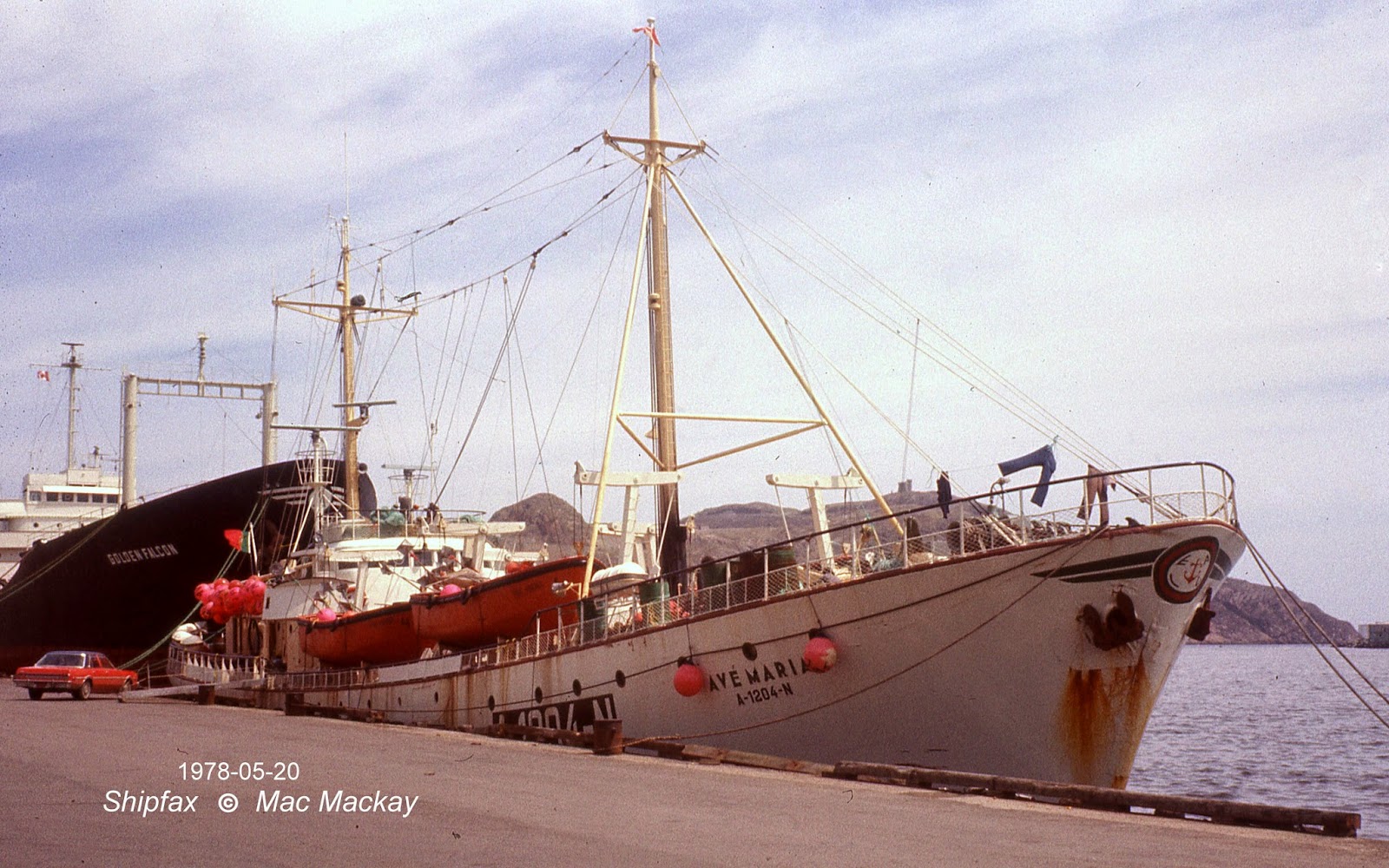 Ave Maria (shown in the two photos above) carried open boats that looked more like lifeboats than dories, and had much greater capacity than the traditional boats. Also based in Aveiro, it is a wooden hulled ship, and thus not listed by Lloyd's. Its history is unknown to me. On September 7, 1982, on a voyage from Finland to Portugal, and 28 miles off the North Foreland, she caught fire. Helicopters evacuated the 45 crew and the hulk was towed in to Chatham on September 10, where it appears to have acquired by the Royal Navy. On February 23, 1983 it was towed to Plymouth. Then on April 12, 1983 she was towed out of Plymouth for Gibraltar where she was to be sunk as a target.
Note the laundry drying on the forestay. These small ships had huge crews, crammed like sardines and even hot bunked in cramped forecastles. 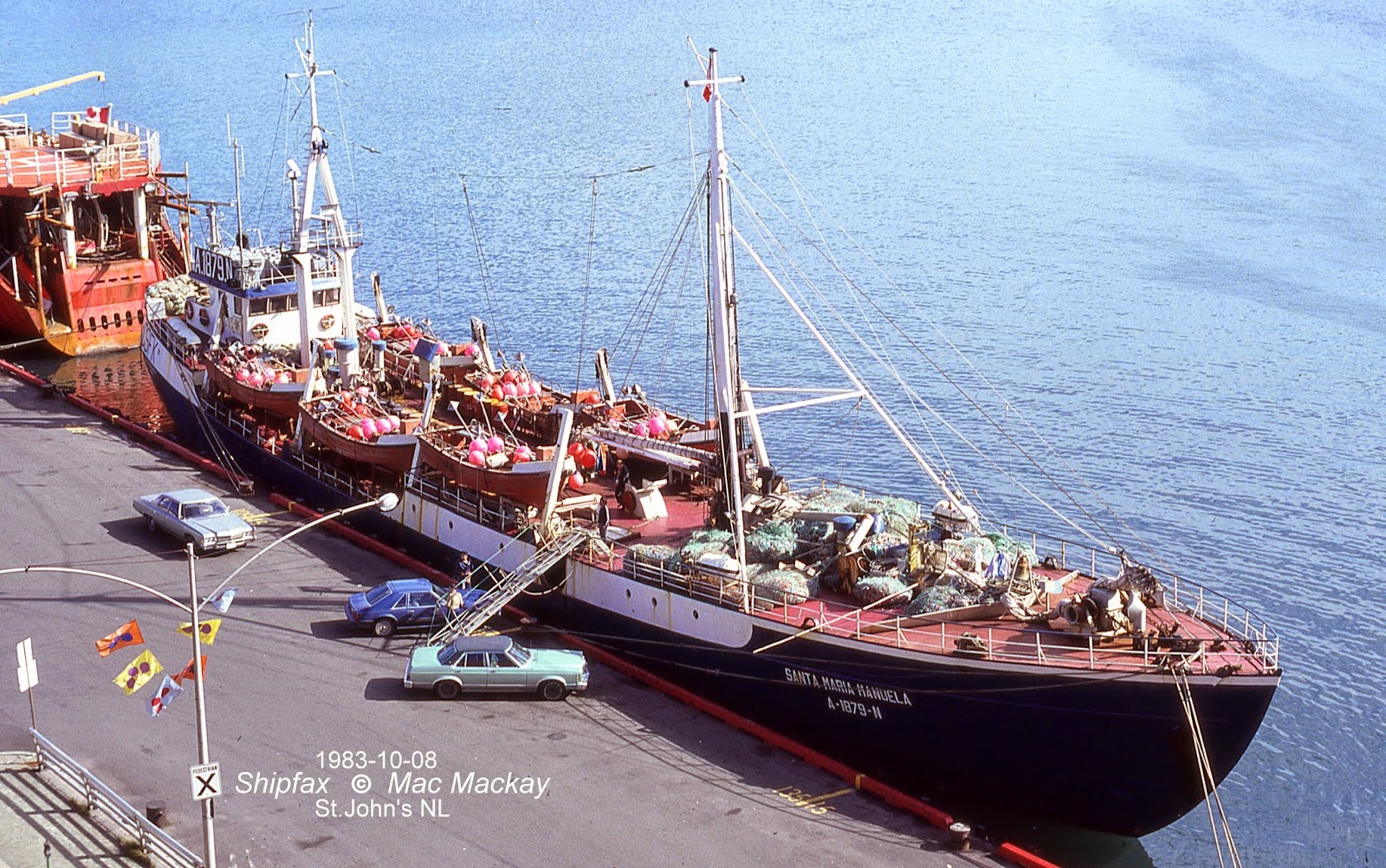 Santa Maria Manuela, also from Aveiro, was built in 1937 by Cia Uniao Fabril of Lisbon, on traditional schooner lines. By 1978 she was carrying large steel open boats for line fishing. Her fate is unknown. See update below. 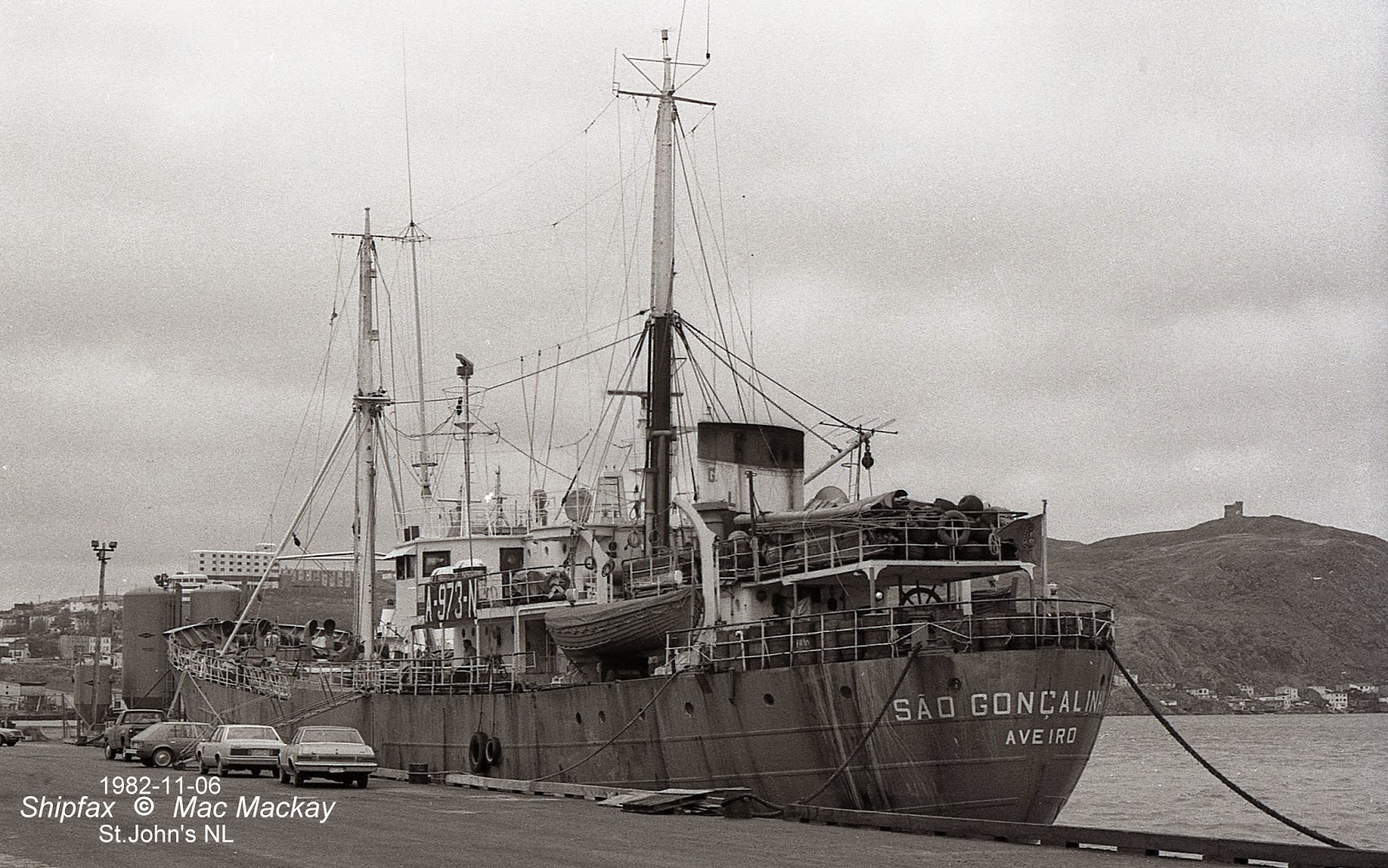 Built in 1948 by Est.Nav. de Viano do Castelo, Sao Gonçalinho later fished out of Aveiro. It was broken up in Sacavem March 4, 1992. Cabot Tower on Signal Hill stands guard over the Narrows in St.John's. 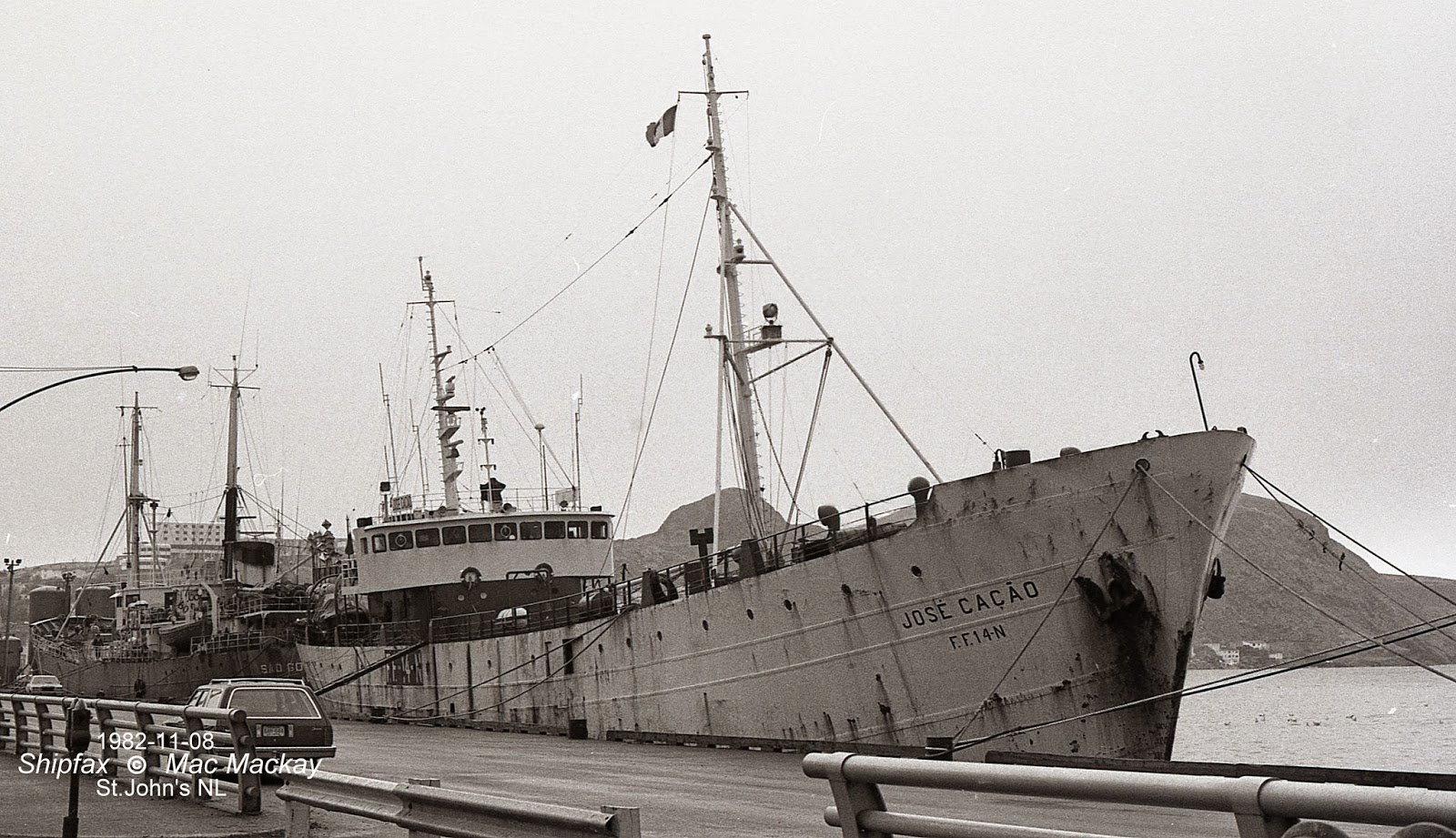 Dating from 1950 as Soto Maior, built by NV Scheepswerft Gebr. Pot in Bolnes, Netherlands, it became Jose Caçào in 1974. It was based in Figueira da Foz and was classed as a cargo ship.  It may therefore have delivered bait and picked up salted fish from other ships. 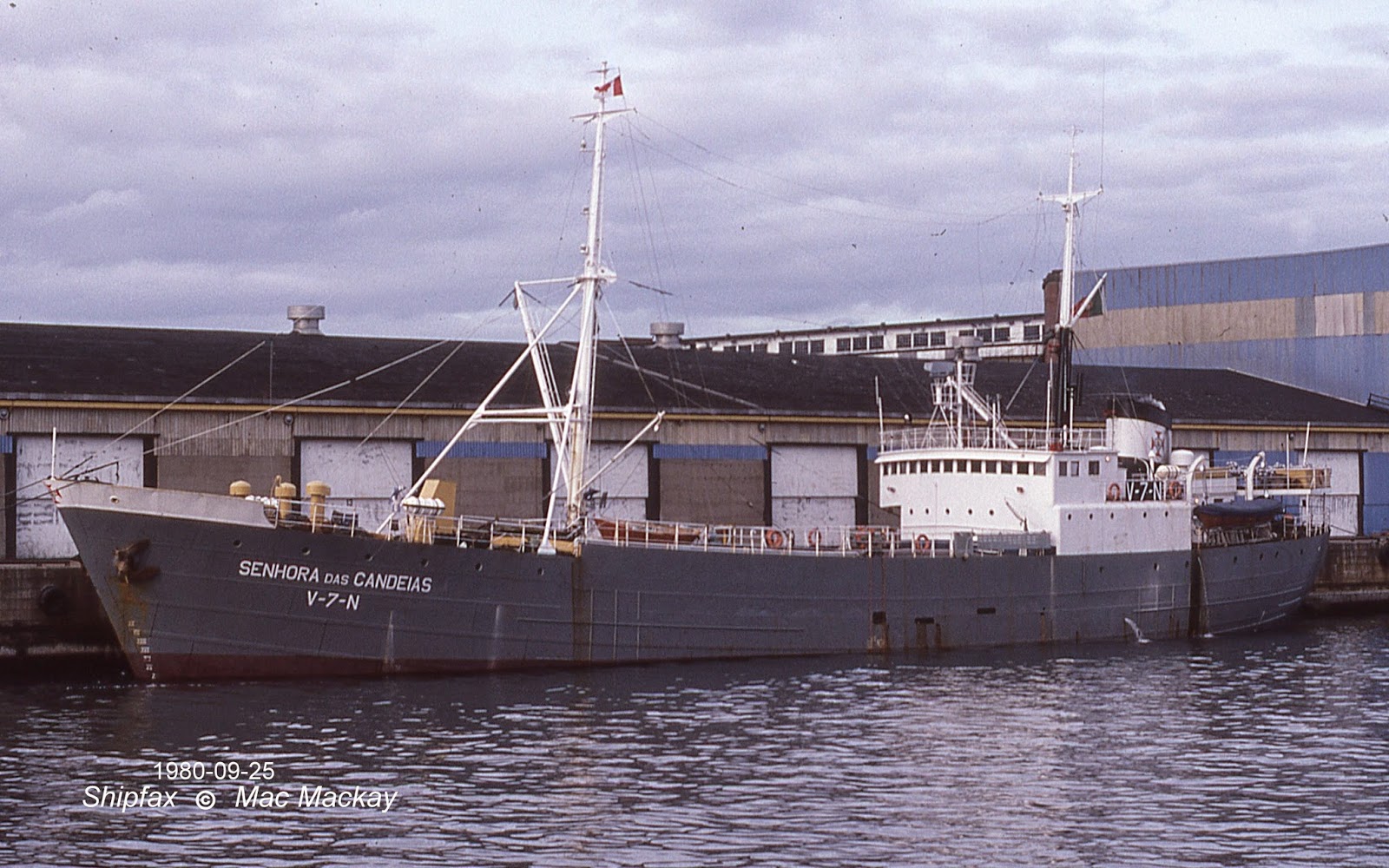 Senhora das Candeias was built in 1948 by Est.Nav. de Viano do Castelo, and fished out of that port. An ice strengthened side trawler, she is seen here in Halifax at pier 23. She was probably in port to load frozen bait - likely mackerel. It was broken up in its home port in March 1992. Antonio Pascoal was another Aveiro based boat, also an ice strengthened side trawler. Built by Haarlemsche Scheepwert Maats. of Haarlem, Netherlands in 1948, she is shown arriving in Halifax, with a large forepeak party ready to handle lines. On June 24, 1990 she suffered an engine room fire and sank northwest of the Azores. 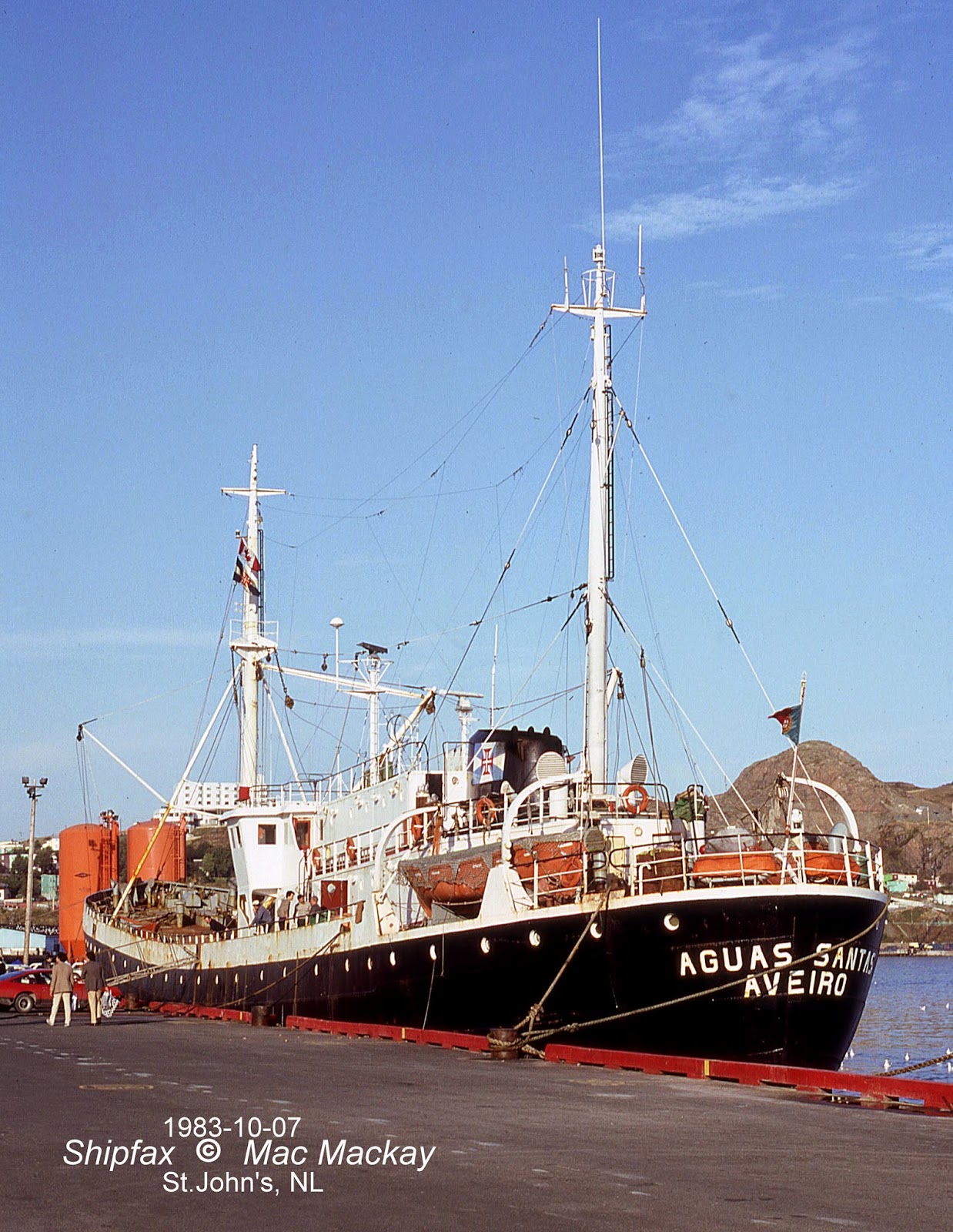 Aguas Santas of Aveiro was built in 1949 by T. van Duijvendijks Scheepswerft in Lekkerkerk, Netherlands. Also an ice strengthened side trawler. She was deleted from Lloyds in 2003. 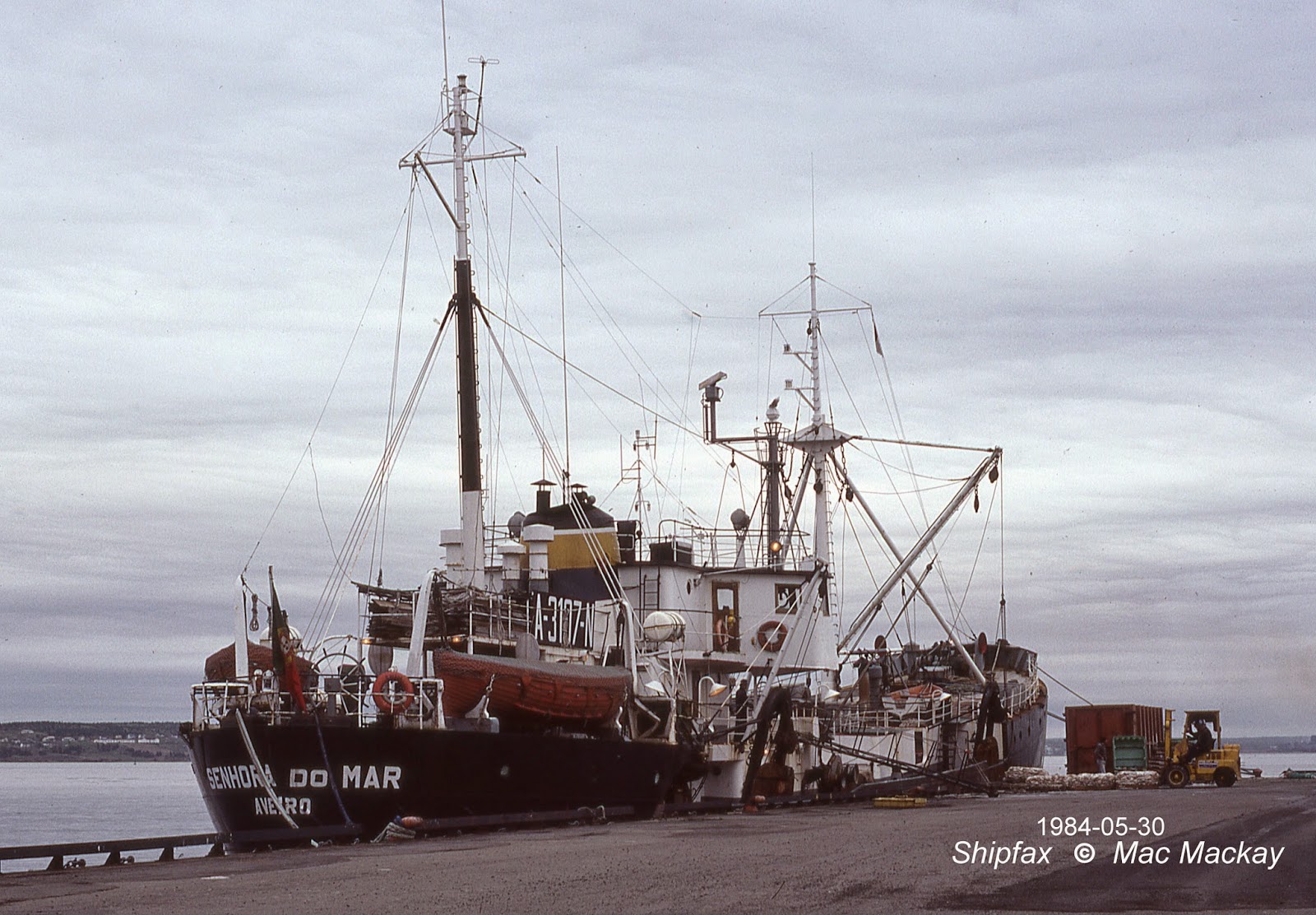 Senhora do Mar dates from 1952 and the shipyard Cia Uniao Fabril of Lisbon. In 1963 she was converted from dory fishing to side trawling. She is seen here in North Sydney loading bait. Renamed Leone V in 1989, she was broken up in 1999. 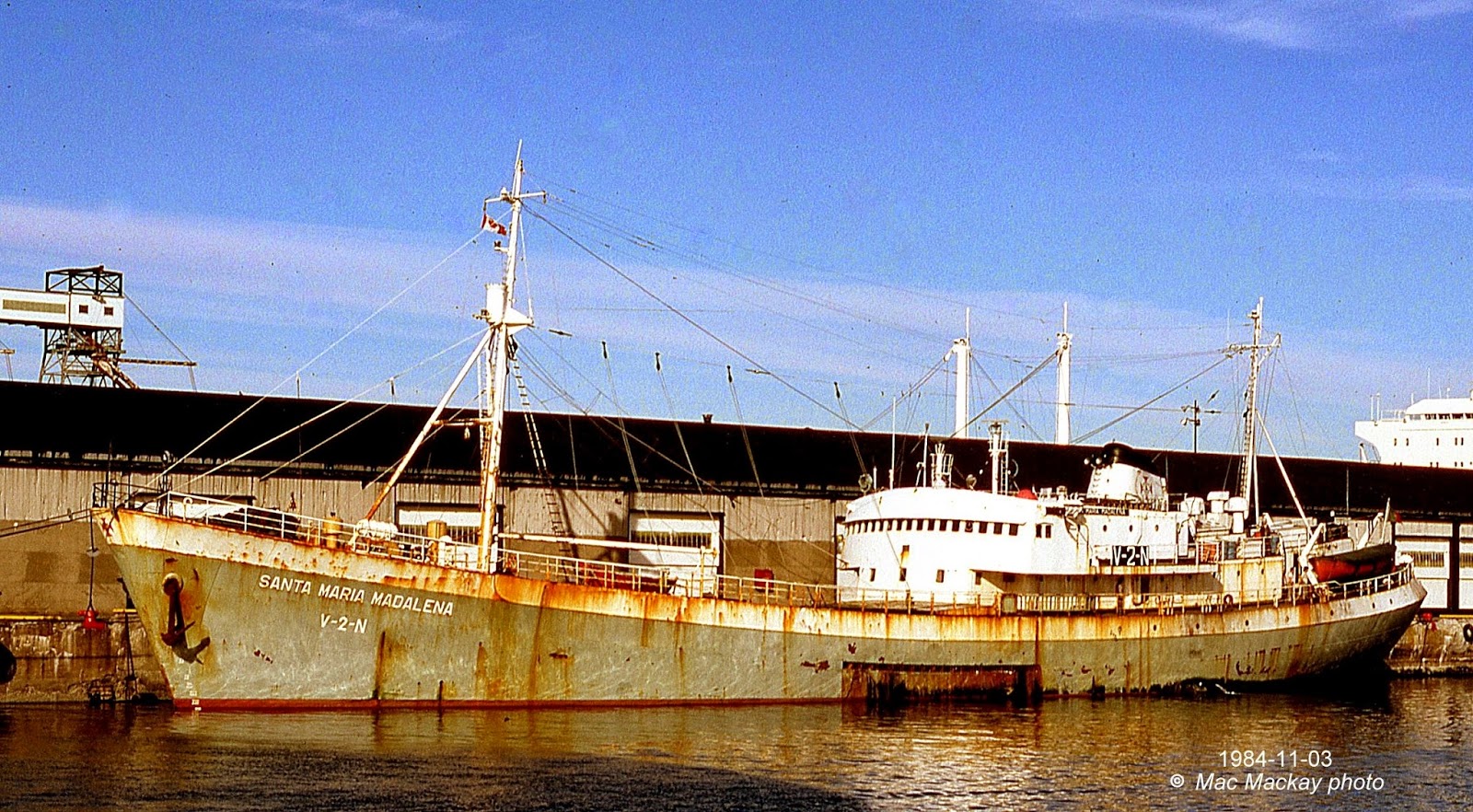 Santa Maria Madalena was built in 1962 by Est.Nav. de Viano do Castelo and fished form that port. In the photo she was at pier 23 [ pier 34 - thanks Bruce] in Halifax in 1984 having been arrested for some fisheries infraction. She was renamed Leone in 1991 and on May 31, 1996 she caught fire in the Barents Sea. Brought back to her home port, she was broken up there June 22, 1996.


Lunenburg was not a traditional port for Portuguese boats, but they did come in for repairs or to load bait, which was mostly mackerel. 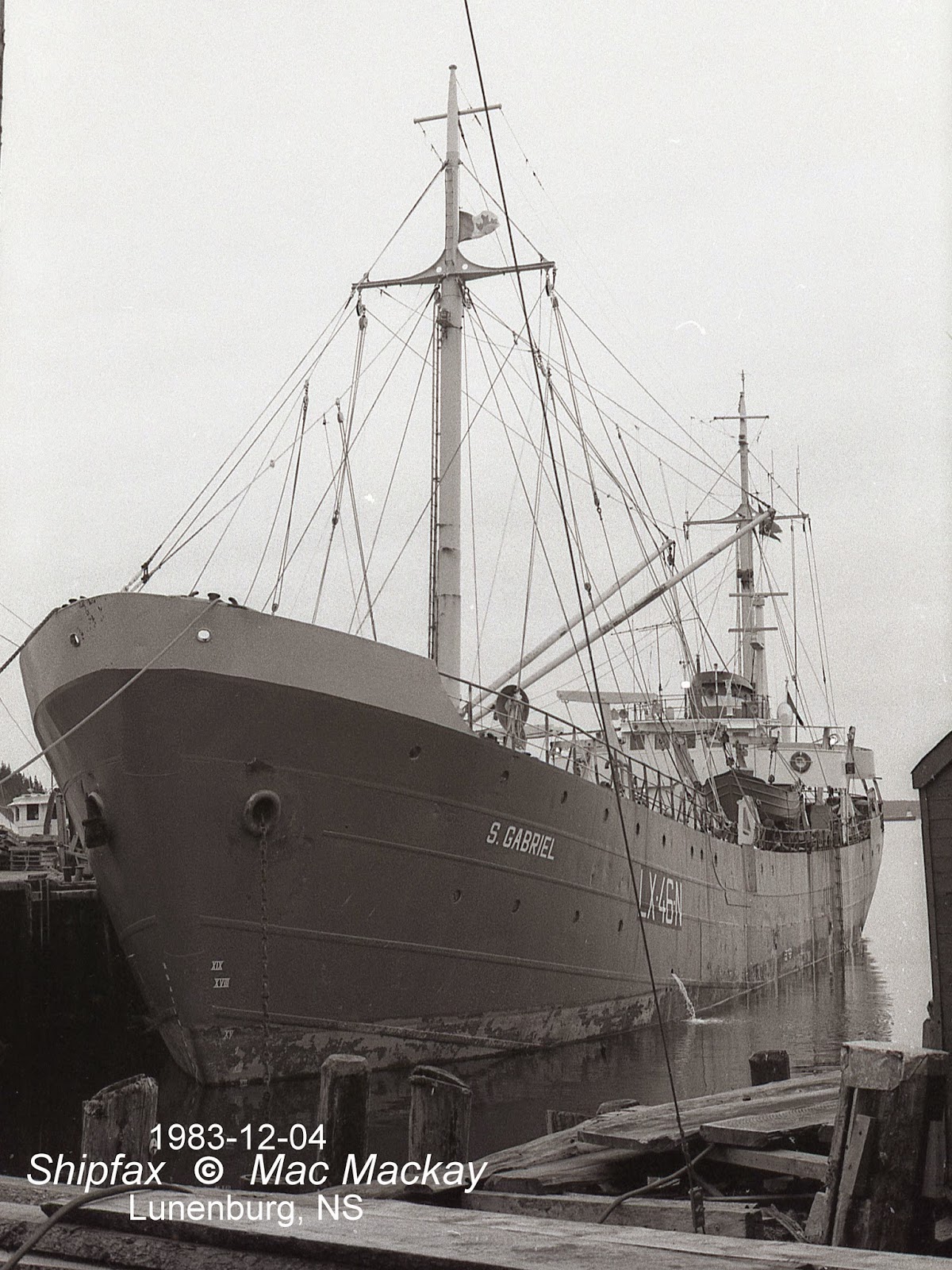 S.Gabriel was built in 1956 by Est Nav de Viano do Castelo. Owned in Lisbon, it fished out of Leixoes.
Reflagged to Panama in in 1987 and named Alpes III it sank July 17,1995 following an engine room explosion off the Cape Verde Islands. A side trawler it had a 965 bhp Mirrlees, Bickerton+ Day main engine.

Update: The fate of Santa Maria Manuela was unknown to me, but not to several readers of this blog! In fact after a narrow brush with the breakers, she was rescued, and not only rebuilt but restored. There is an excellent CBC documentary (45 minutes long) at: http://www.cbc.ca/player/News/Canada/NL/ID/2259472949/
.
Posted by Mac at 9:02 PM