CMB returns - if only briefly

Compagnie Maritime Belge (CMB) is one of the oldest Antwerp based shipping companies. Founded in 1895 it initially traded to Africa, but later became a general cargo and liner company. 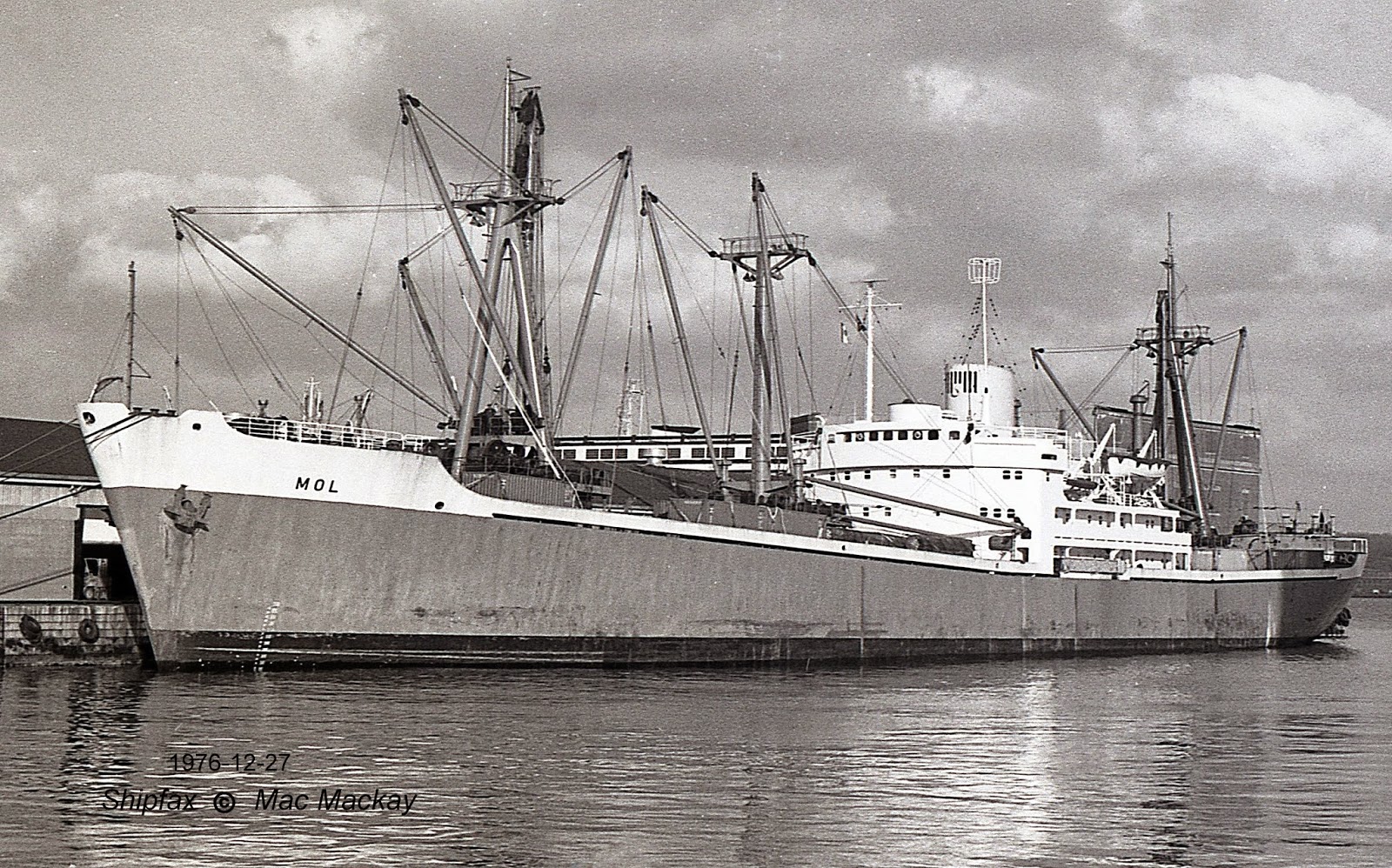 CMB operated a fleet of cargo ships and bulkers. Built in 1962 Mol was a conventional cargo ship of 8943 grt. Sold to Greek owners in 1978 it was broken up in 1985. In the 1976 photo above it is carrying some containers on deck.

By the 1960s it had a fleet of handsome general cargo ships, seen often enough in Halifax, but its owners saw the coming of the container age. In 1969 they joined with Charles Hill (owners of the Bristol City Line) and Clarke Traffic Services of Montreal to form the Dart Container Line. The new company built three large (for the time) container ships especially designed for the North Atlantic. CMB's contribution was Dart Europe built in 1970 by the Cockerill Yards in Hoboken, Belgium. The 33,400 grt ship had a capacity of 1556 TEU which was considered very large at the time.

The Dart ships had full width enclosed bridges and presented an impressive sight. Powered by a single 29,000 bhp Sulzer, they were capable of 21 knots. 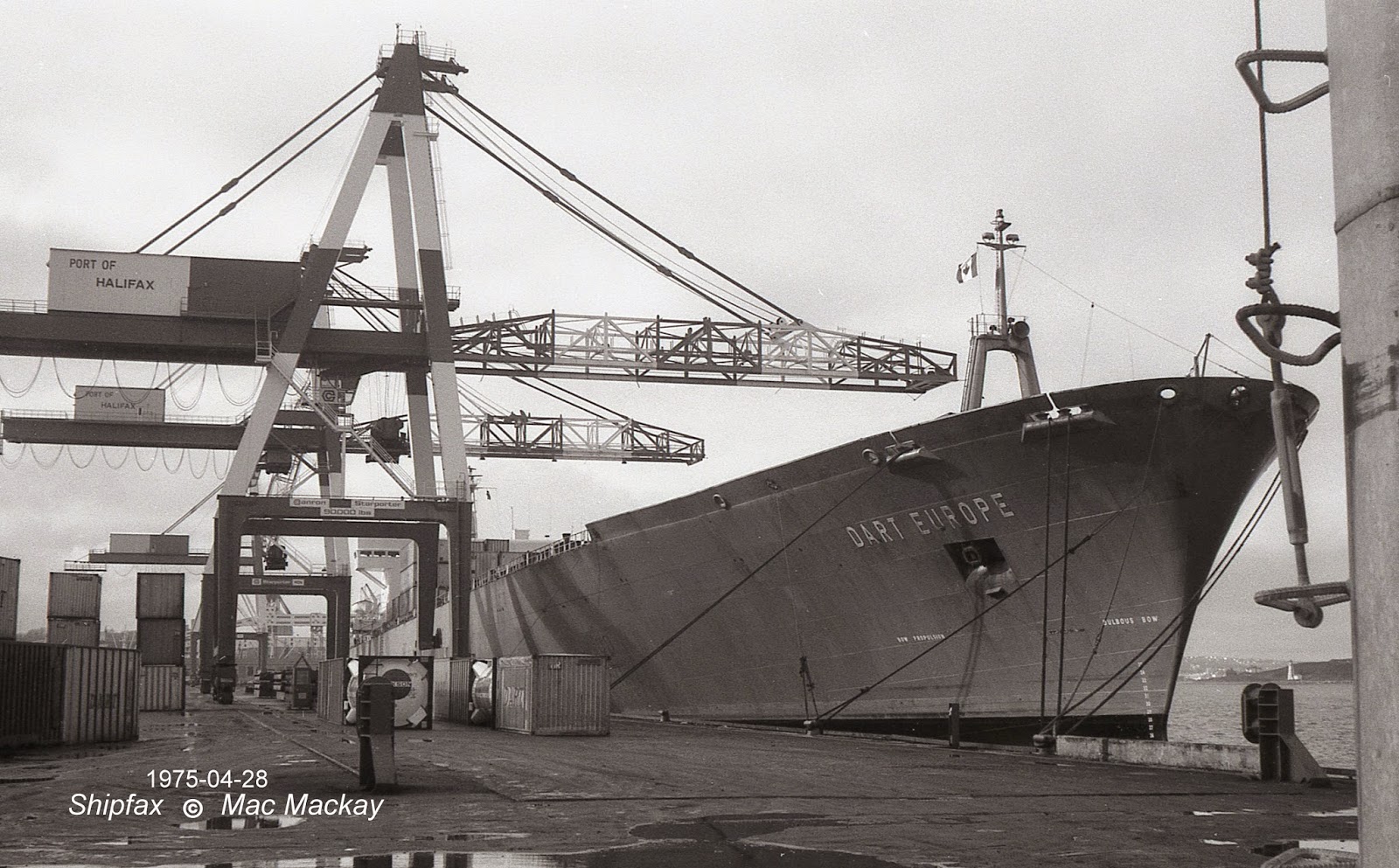 Halterm had only two cranes when it first started operations in 1970. *

Bristol City Line was acquired by Bibby Line, but Bibby sold its share to OOCL. In 1981 Dart ceased to exist when OOCL joined with CP Ships for a coordinated St.Lawrence River service. Dart Europe's last call in Halifax, under that name, was August 3, 1981. A CMB ship has probably not appeared in Halifax since.
CMB maintained a partnership in the OOCL/CP service and the ship was renamed CMB Europe in 1984. In 1985 it was renamed Canmar Europe, and was sold to Canada Maritime (CP Ships).

At anchor in Bedford basin as Canmar Europe it waits out a strike in Montreal with other CP ships.


It did however make two more appearances in Halifax under that name in 1995 when a longshoremen's strike in Montreal necessitated a diversion. It remained at anchor from March 15-23, 1995 then returned April 3-4, 1995 to pick up stranded containers that has been sent to Halifax by rail during the strike.
The ship was sold to Greek owners in 1996, briefly renamed Folly, then took up a short term charter as Zim Columbo.It was finally broken up in Alang India in 1998.

CMB had been building up its bulk carrier fleet in the meantime, acquiring Bocimar in 1962, and today's arrival , although carrying a CMB name, wears the Bocimar funnel and is owned by Bocimar International NV of Antwerp. Operation is entrusted to Anglo-Eastern Ship Management of Hong Kong. 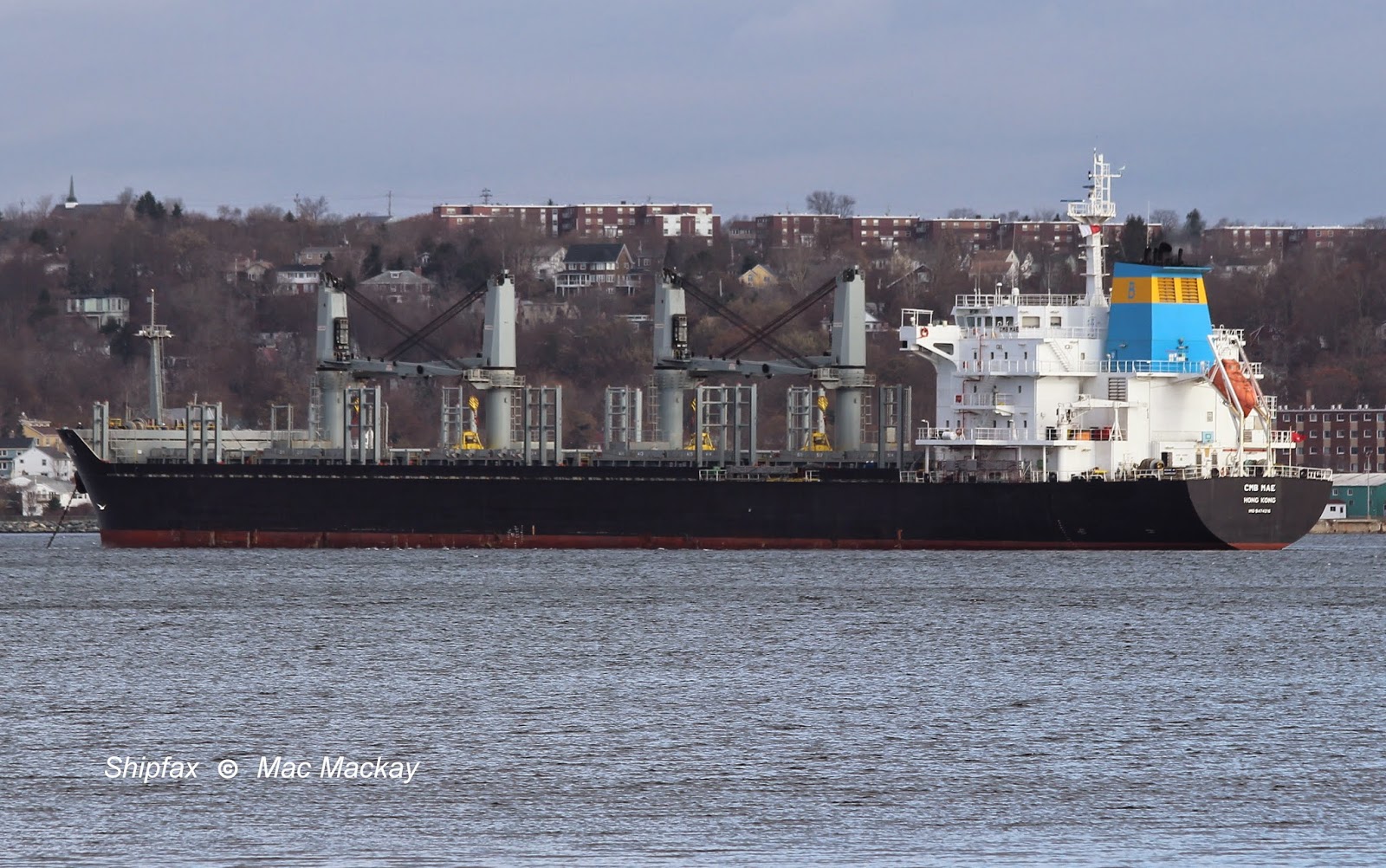 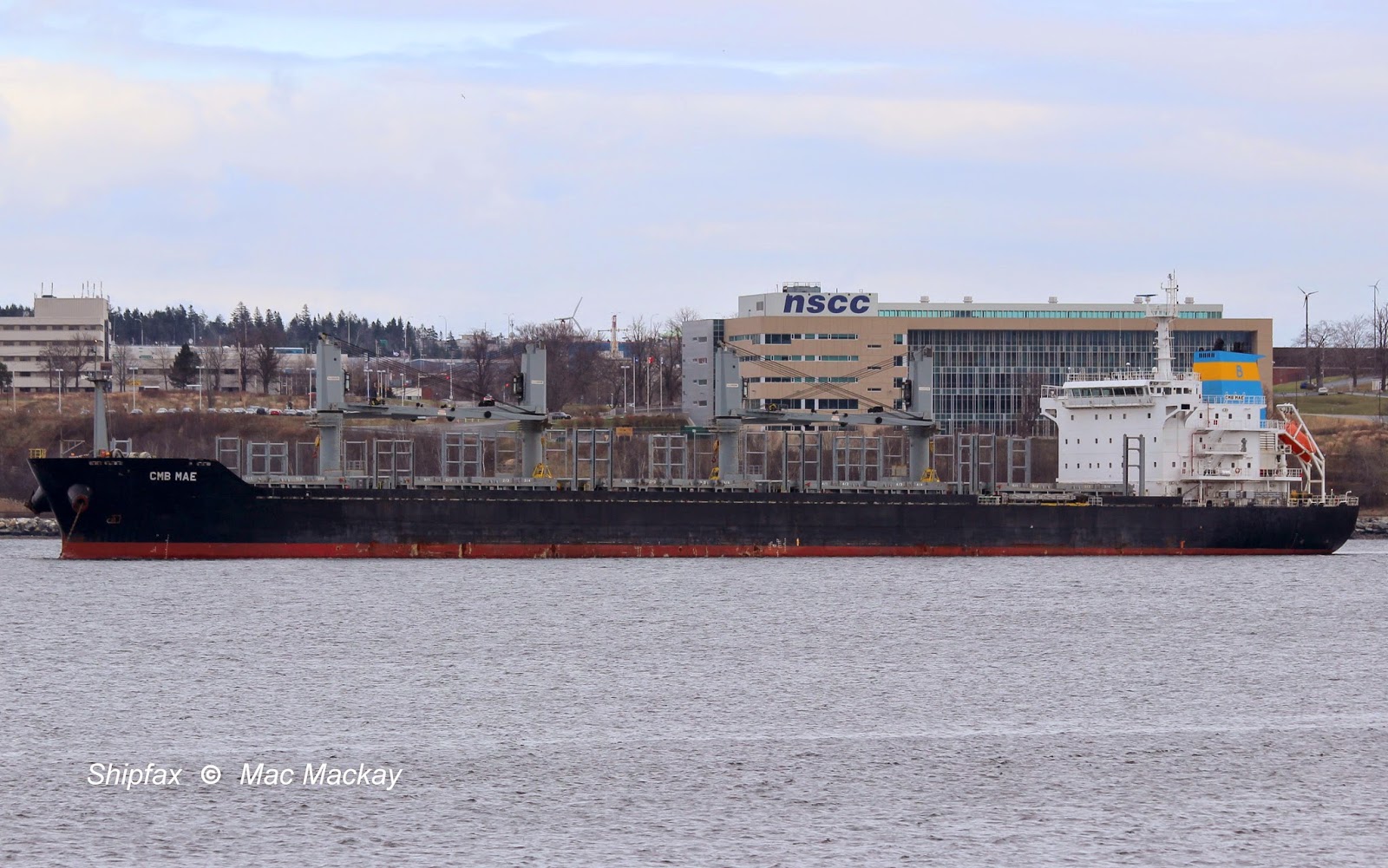 CMB Maé flies the Hong Kong flag, and was built in 2010 by Samjin Shipbuilding Industries Co of Weihai, China. Of 23,432 grt and 33,694 dwt, it carries four cranes and clamshell buckets to handle its own cargo. It also has stanchions for deck cargo such as timber. The ship was in port for long enough to take bunkers and sailed this evening for Italy.

*
For comparison purposes: The Halterm container terminal in 1971: 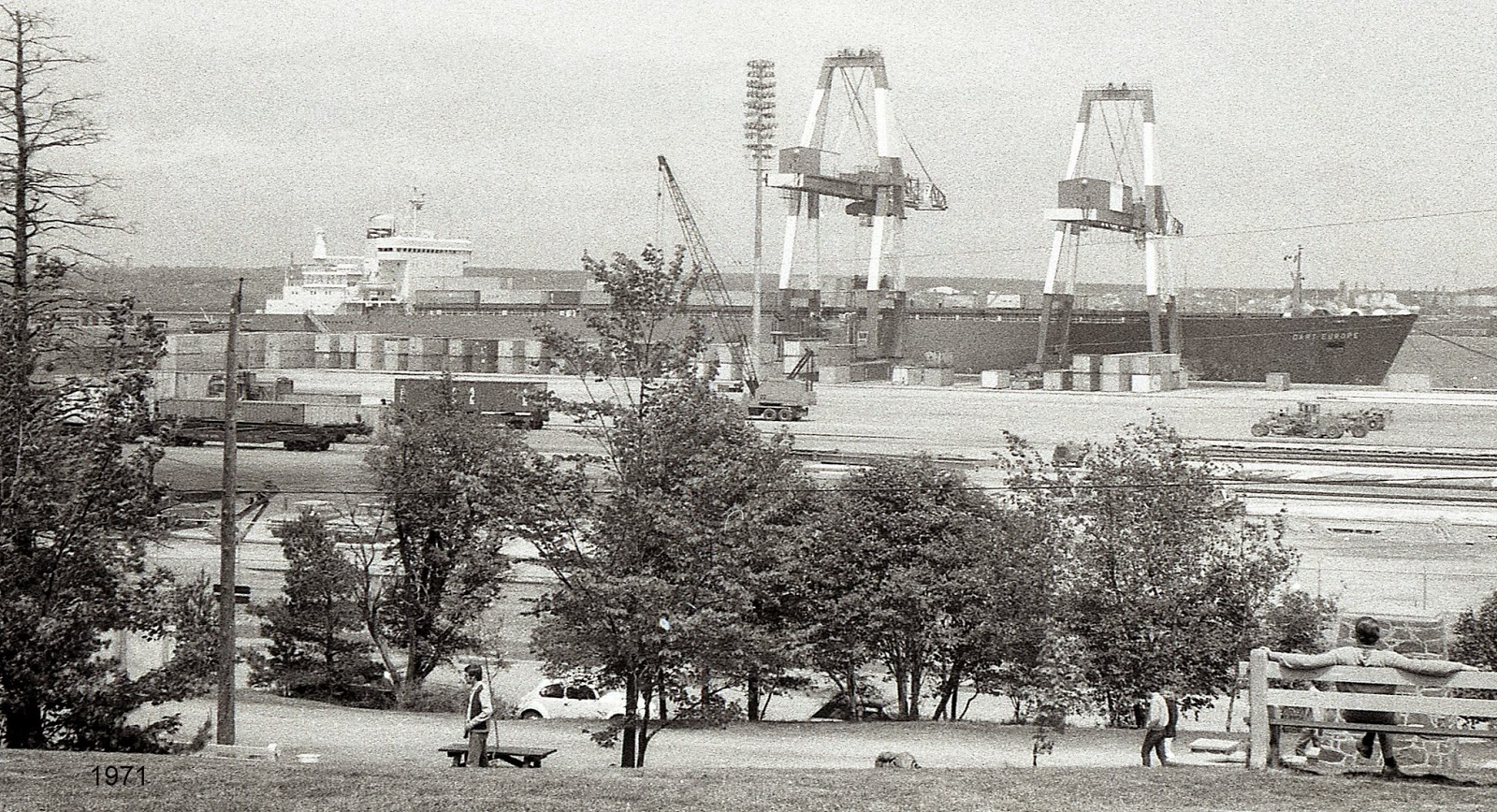 Dart Europe - perhaps on its maiden voyage in 1971. Grading and paving are still underway. A stone cairn directly behind the park bench is the common factor. 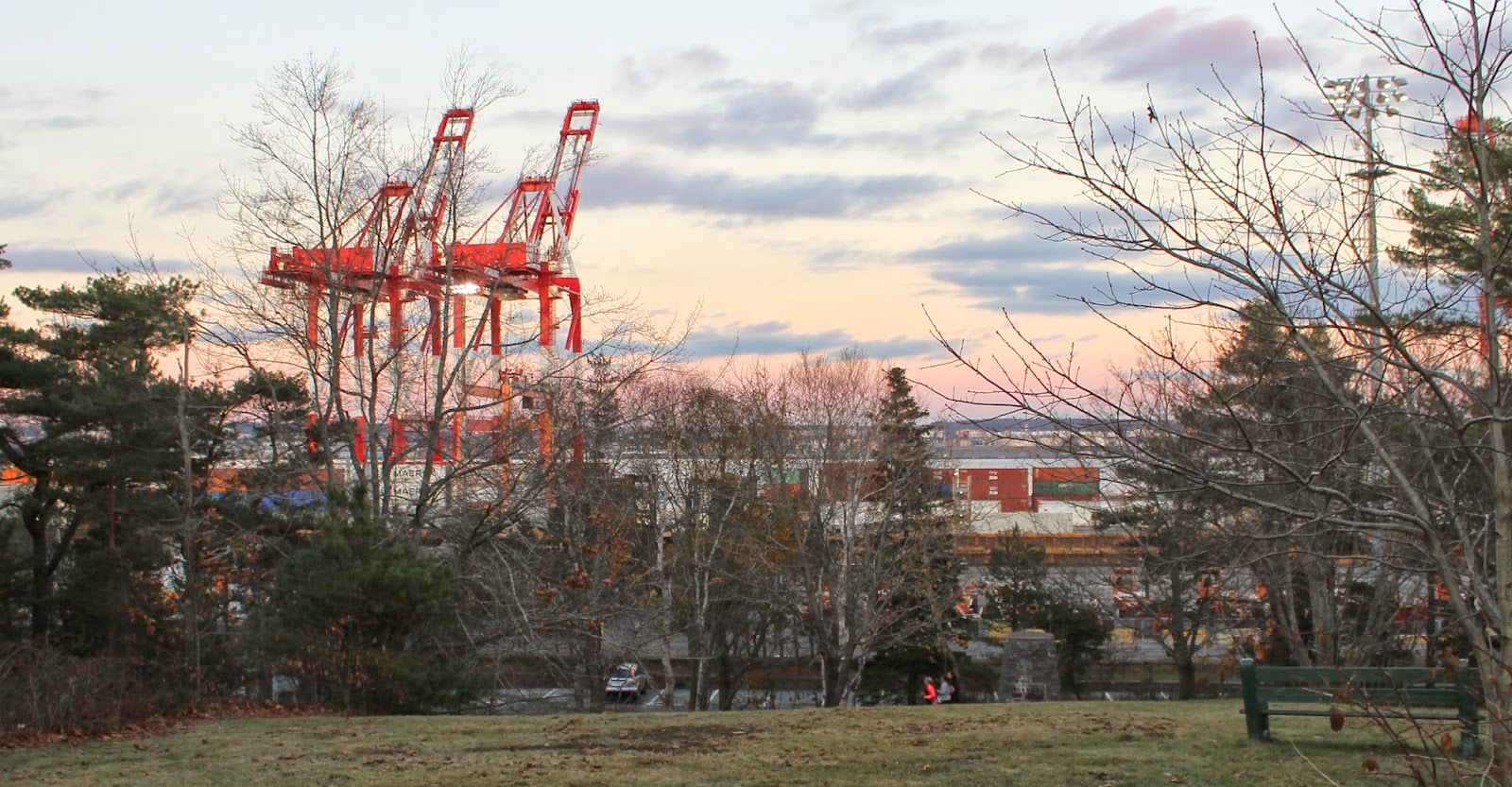 In a comparable view this afternoon, but from slightly higher up the hill: the trees have grown up -as have the cranes! The park bench has moved, but the stone cairn has not.