A new book The Canadian Coast Guard Fleet 1962-2012 by lead author C.D.Maginley celebrates the service's ships during its first 50 years. It is available from Long Hill Publishing. For more information and ordering see: http://longhillpublishing.ca/

Looking back over the CCG it has seen many changes, and as 1984 is the feature year for Shipfax, here is a look at what was happening thirty years ago.

The Coast Guard's Search and Rescue ships were painted in a distinctive scheme, which didn't last long! The scheme included the smaller inshore boats as well as the mid-shore and deep sea rescue vessels: 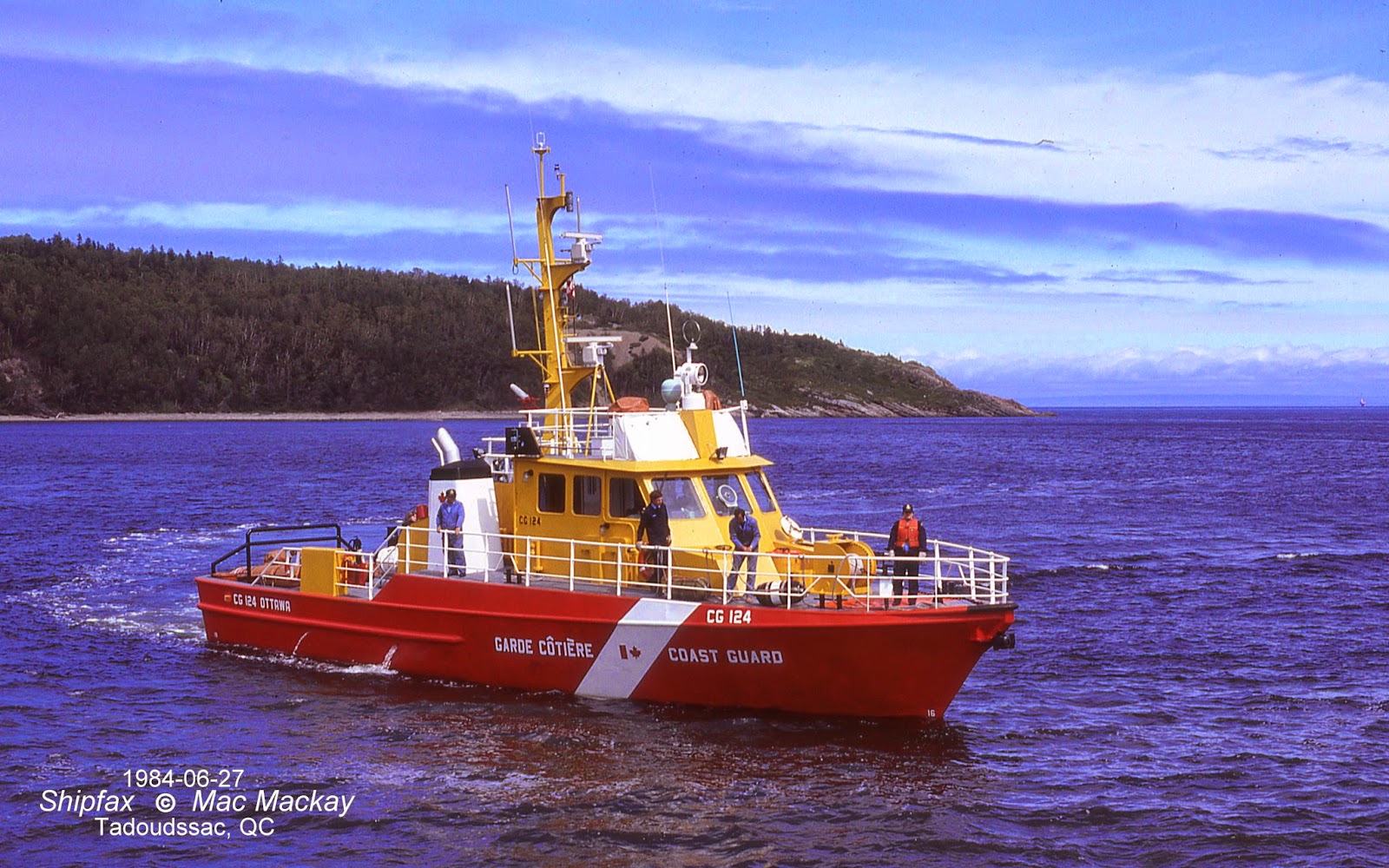 CG 124 arriving in Tadoussac, QC displays the CCG SAR colour scheme. Built in 1980 by Breton Industrial+Marine, Point Tupper, NS, it was later renamed Ile Rouge. It served until 2011 when it was decommissioned and laid up in Prescott, ON and renamed  2013-01.Earlier this year it was sold as a pleasure craft and renamed Never on Time by Provincial Maintenance Inc of Niagara Falls, ON. 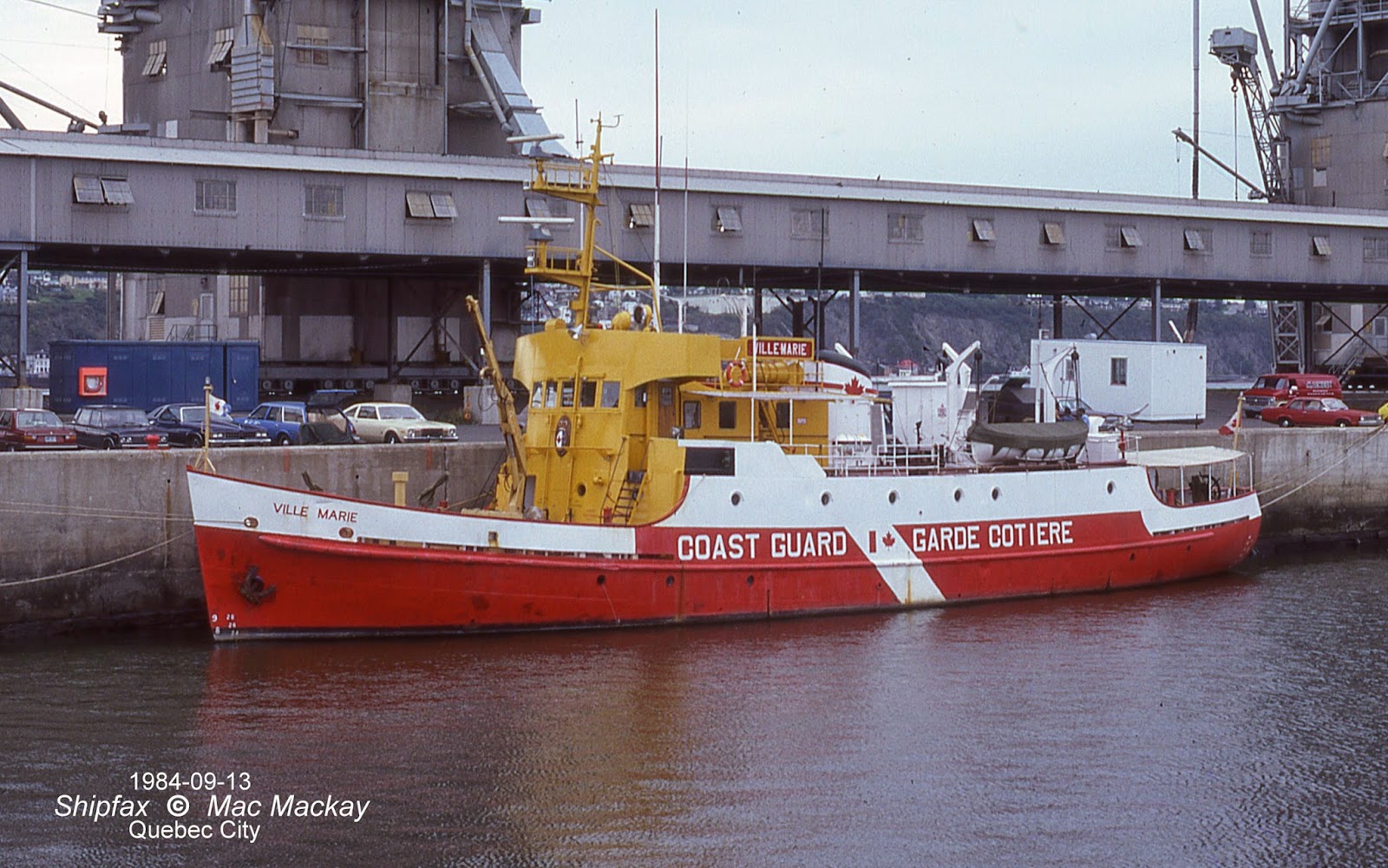 Ville Marie in the shadows of the mobile grain legs in Quebec City was built in 1960 by Russel-Hipwell Engine Co, Owen Sound, ON. It was built as a survey vessel, but transferred to SAR duties in 1980. The smallest diesel electric ship in the fleet, it was retired in 1986 and sold to a mission society.. Renamed Heavenbound, its conversion stalled for funds, then acquired by a Toronto area owner in 1995. He renamed it Still Watch and it achieved some fame in a TV sereis where iut was given the unofficial name of Vast Explorer. For more photos see the Russel web site:  http://stevebriggs.netfirms.com/osmrm/xvillemarie.html 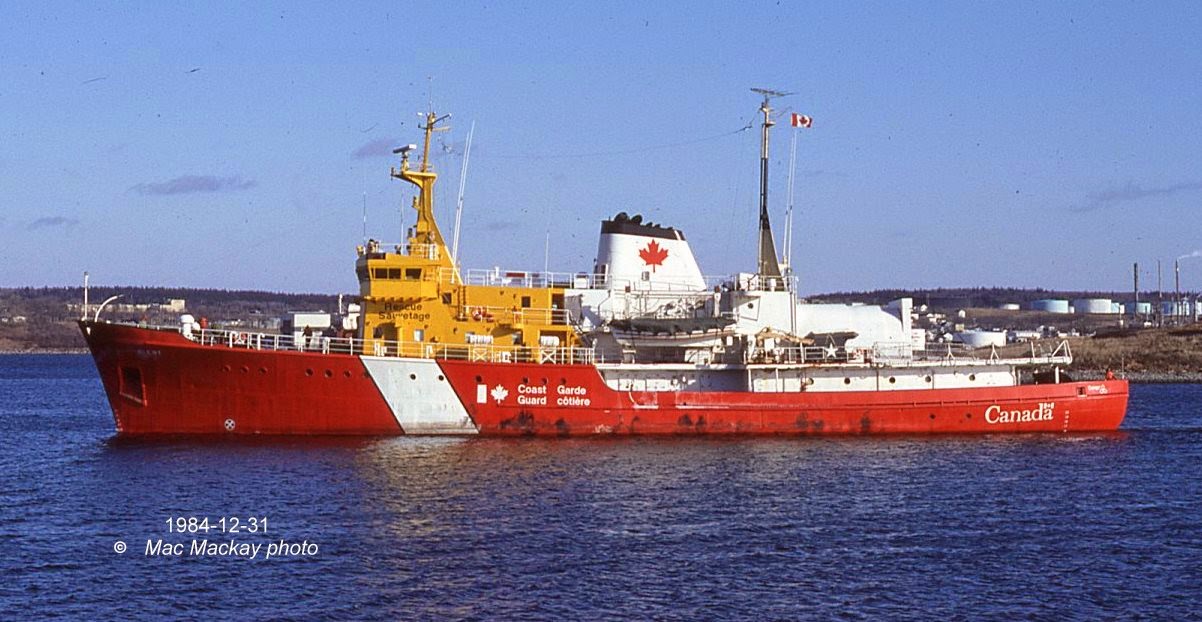 In 1984 the primary SAR vessel in Halifax was Alert, built in 1969 by Davie SB+R in Lauzon, QC. It was laid up in 1994, chartered to the RCN, then back to the CCG in 1995 when it was finally decommissioned and renamed 1996-01. It was sold to J.Marr Co of the UK for offshore standby work and renamed Ocean Alert and after several resales, ended up treasure hunting in the Caribbean. It was scrapped in Aliaga, Turkey October 24, 2011.


With new ships ordered for buoy work and light icebreaking the older units were enjoying their last years of service. 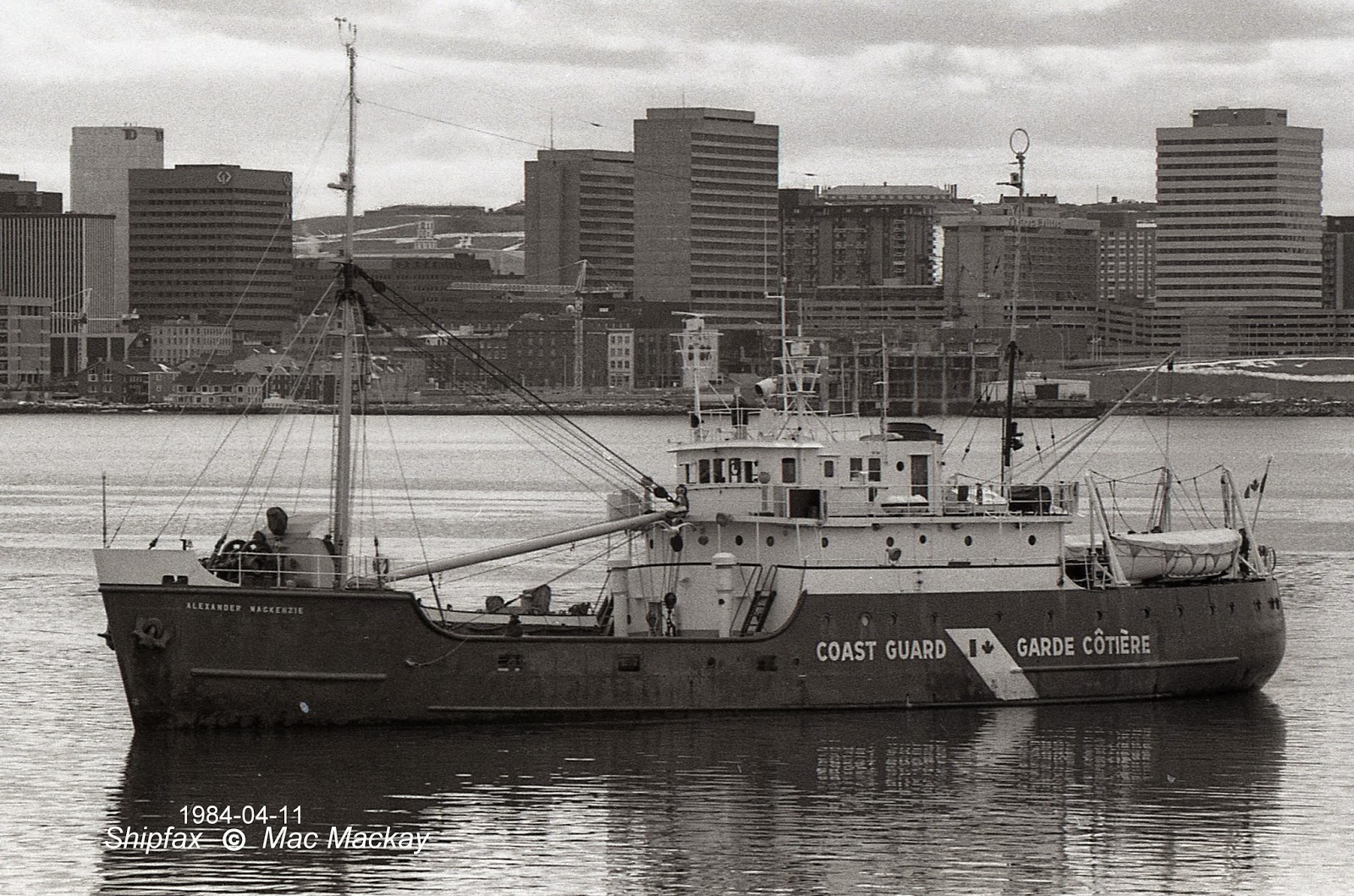 Alexander Mackenzie was built in 1950 by Burrard DryDock in North Vancouver, with a sister ship Sir James Douglas, for navaids work on the West Coast. It was transferred east in 1982 in exchange for Wolfe, and remained in service until 1988 when it was in turn replaced by Montmorency.
Renamed 902 It was sold in 1990 to Quebec owners involved in selling old fishing vessels to South America. Its activities have been somewaht vague since then, but in 1990 it became Viviane II for Balladier Shipping of Panama City, Panama and is still in existence according to Lloyds. 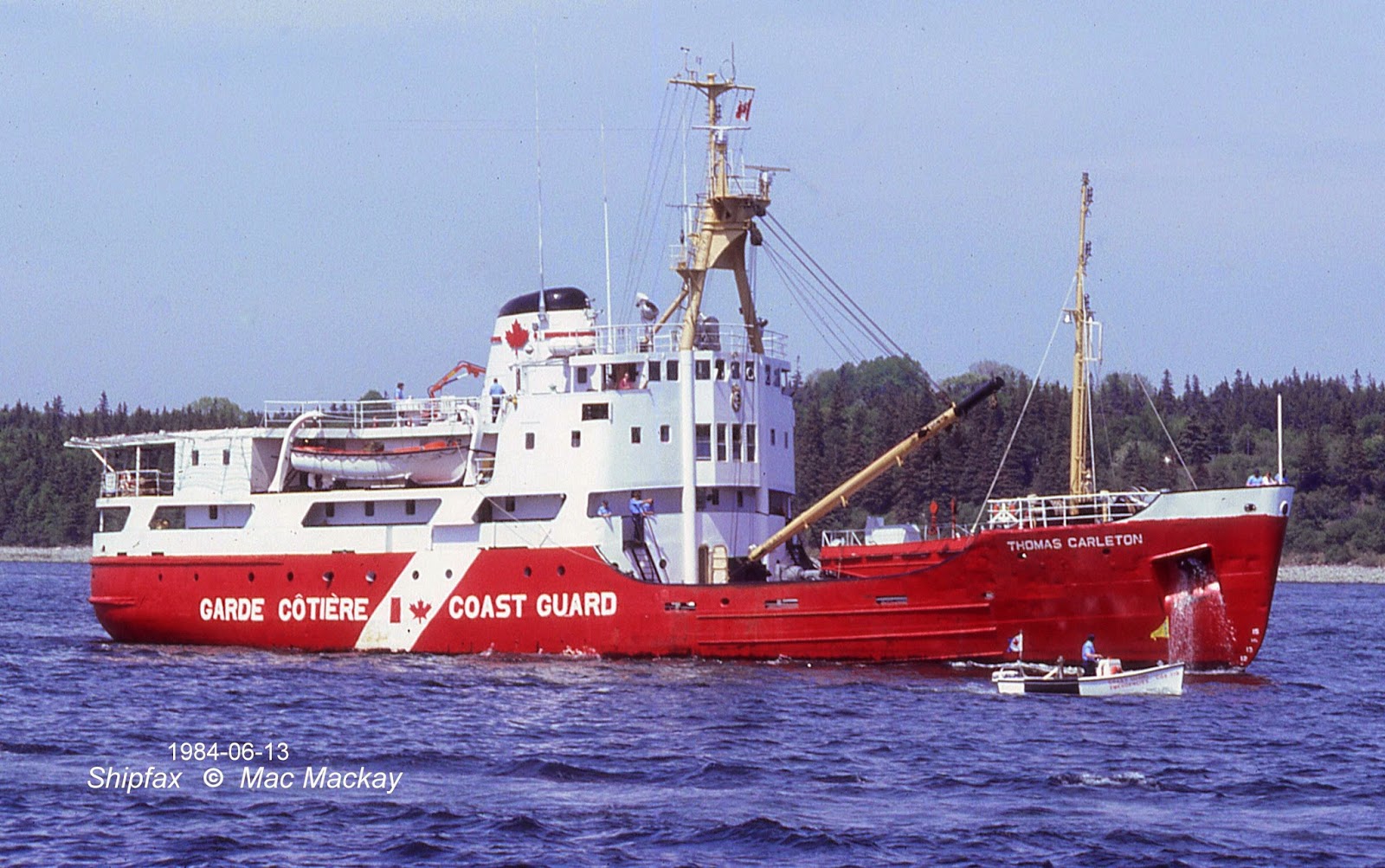 Thomas Carleton was one of  series of similar ice strengthened buoy tenders. Built by Saint John Dry Dock in 1960, for service in the Bay of Fundy. It is seen above riding heard on spectator craft during the 1984 Tall Ships Parade in Halifax. It was powered by durable Fairbanks Morse diesels.
It served until 1991 when it was renamed 1003. Breifly renamed Aurora Explorer (the name was never painted on the ship's hull). It became the Sea Shepherd Society's Cleveland Amory in 1993 and achieved notoriety when it  cut the trawl lines of the Spanish fishing vessel Rio Las Casas on the Grand Banks. However it suffered and engine failiure, was towed into St.John's, seized and sold at auction. The new owners renamed it Hawkeye Express and it reached Willemstad, Curaçao where it was arrested again for wage claims.It is believed to have been scrapped, and was dropped from Lloyds in 2002.

Some of the Navaids ships were still steamers: 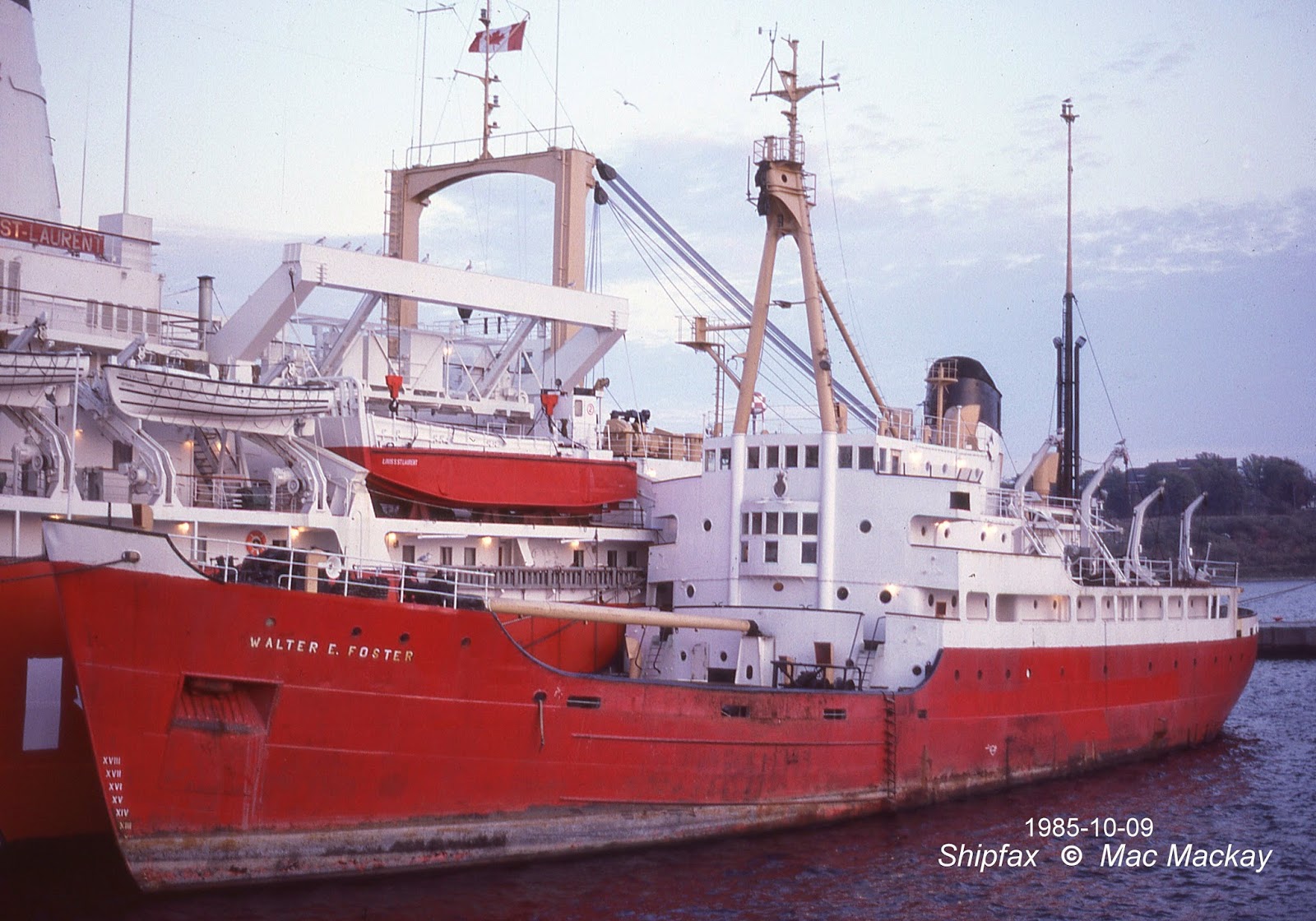 Walter E. Foster was a product of Canadian Vickers in Montreal in 1954. It was also built for the Bay if Fundy and worked out of Saint John, and was rarely seen in Halifax. However in July of 1985 it arrived in Halifax in tow (yes) of Mary Hichens and laid up after a boiler collapse. It was soon de-rigged and cannibalized for parts. It was fitted with a Unaflow steam engine. 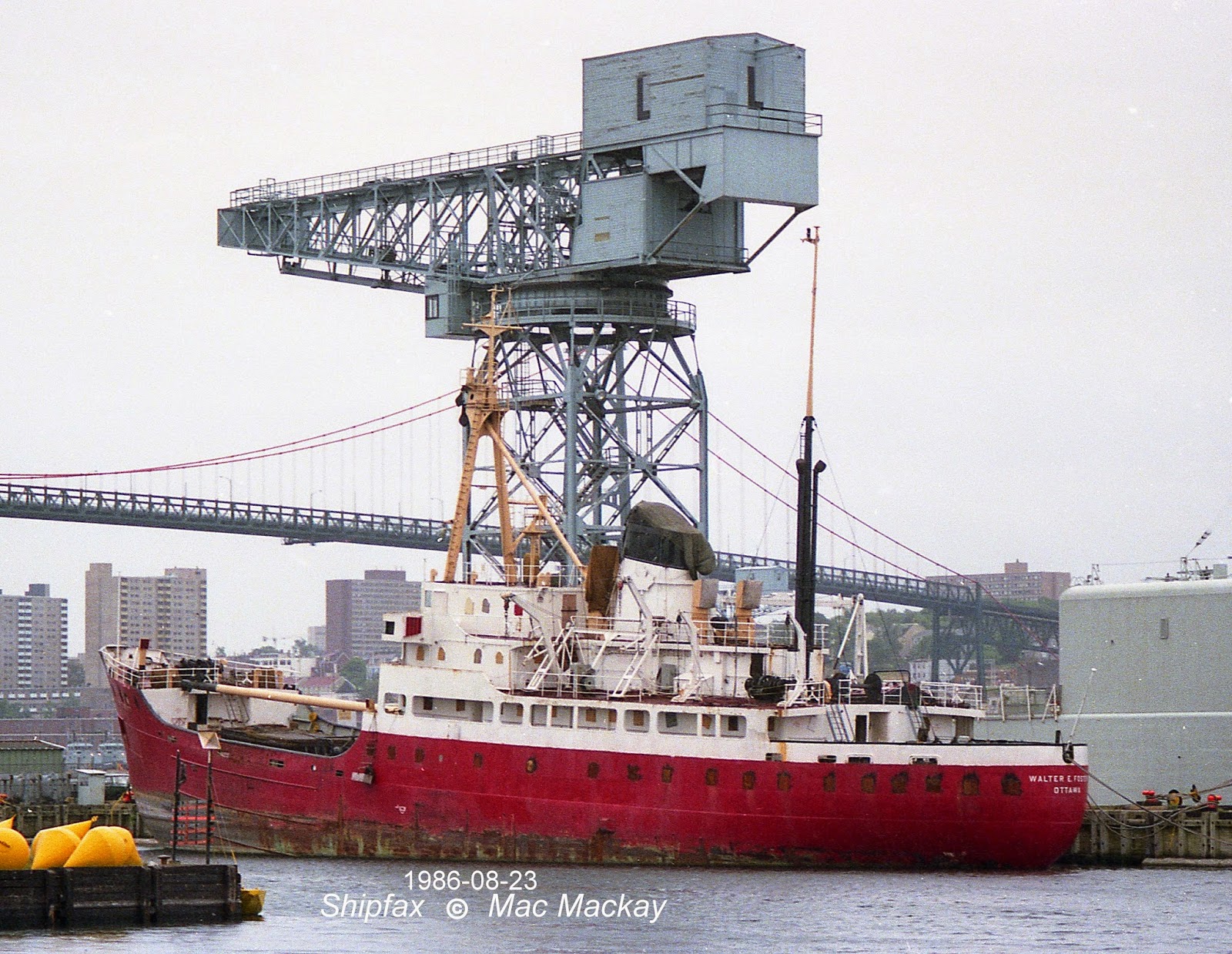 In Janaury 1986 it was moved to the Jetty Lima (still with its hammerhead crane). All its ports were welded over and  in early October it was towed to sea and sunk as a target by the RCN.

My favourite steamer was: 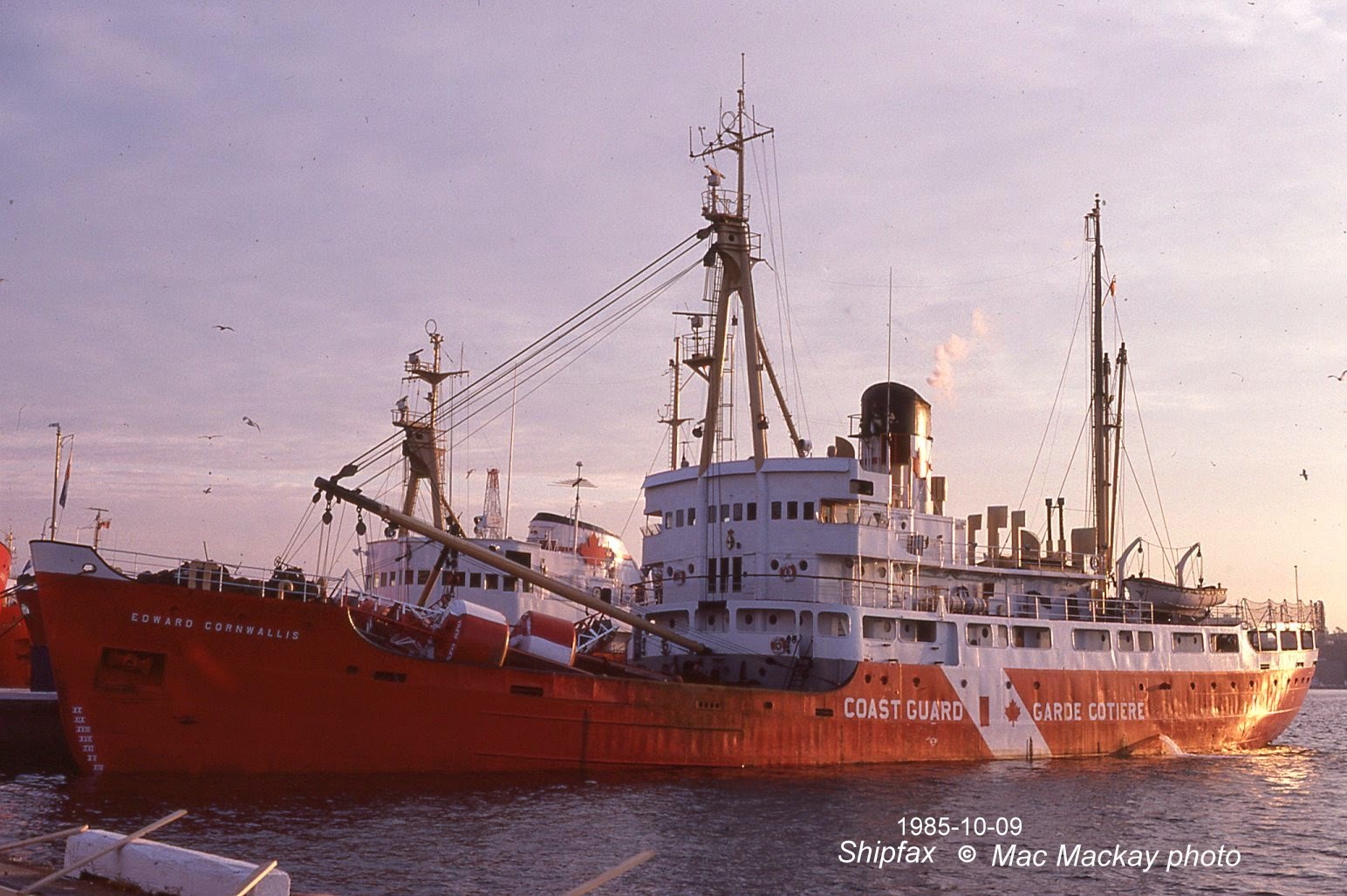 The first Edward Cornwallis, built in 1949 by Canadian Vickers, the builders also constructed its steam machinery on the Unaflow system. Note the little wisp of steam emanating from its stack while alongside at the Dartmouth CG base.
The prototype for the 1950s era ice strengthened ships of various sizes, she served until 1986 when she was replaced by a new ship of the same name. Renamed Edward to avoid a conflict, she was finally sold in 1987 and towed to Coburg, ON. Her future as night club or inn came to naught and in 1993 she was towed to Port Maitland, ON and broken up.


The icebreaking fleet was hard at work, with three ships based in Halifax, Labrador, John A. Macdonald and Louis S. St-Laurent. More of that in Part 2.