It was wall to wall reefer boxes along the fence at Halterm again this week. 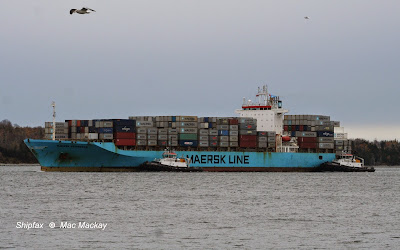 A looming shortage of reefer containers has some market analysts concerned. Apparently the world's stock of reefer containers, estimated at 2.2 million TEU is not keeping up with a 3% year over year increase in demand. Major lines such as Maersk and Hamburg-Sud have not ordered new boxes recently, and when they do in the next year or so , they will only be renewing capacity, with little growth in numbers. 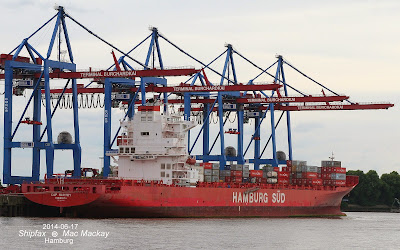 Maersk and Zim and other lines pre-position reefer cans in Halifax in advance of expected fish and produce export shipments, and there appear to be lots in stock for the local market - it is often wall to wall reefers along Halterm's fence - and these are just the boxes in storage.
Active boxes, plugged in and waiting for shipment constitute another large area. 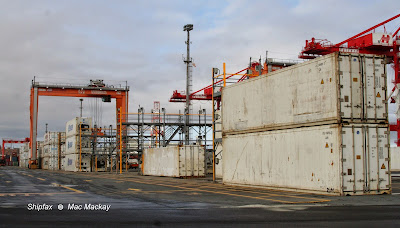 Once on the ground, active boxes are plugged in and serviced from a series of platforms. 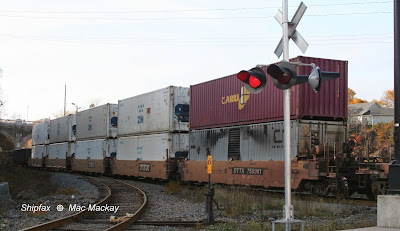 CN operates diesel generator boxes in standard 40 foot containers that that fit container well cars and feed reefer containers with power while they are in transit.

There are dedicated reefer container ships (they don't call in Halifax). 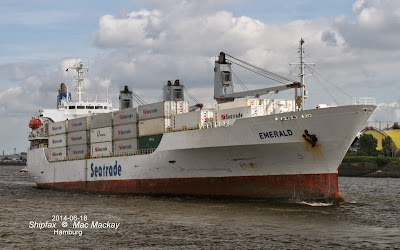 The large Dutch based Seatrade-Groningen is one such company. Their Emerald was heading south , in ballast, from Hamburg in June. Back hauls in reefer containers, particularly from north to south are all too rare.